April Fools’ Day is upon us, and like every year, Google is doing its best to outdo itself. The restructuring that put Google under the new Alphabet parent company didn’t have an impact on last year’s gags, so we’re expecting the usual: Jokes ranging from ridiculously lame to very clever, spanning the simple blog post or video to the elaborate gag or new feature.

Google’s various divisions always create more practical and impractical jokes for the holiday than any other tech firm, and it’s simply hard to keep track of them all. As a result, we have put together our annual roundup.

Pac-Man in Google Maps was so popular in 2015, a Google spokesperson told us, that this year the company is introducing Ms. Pac-Maps. The game is available on Google Maps for Android and iOS, and should also be rolling out on the desktop. Compared to the previous version, the scoring system has been updated, you can now save your score by signing in, the game is much easier to find on Android and iOS (right above the compass), and the fruit are different from the Pac-Maps variation. The game will be live until April 4.

Waze has been “approached by a leading extraterrestrial exploratory organization to build a more thorough and informative map of the fourth rock from the sun.” The Google-owned company is leaning on its leading map editors from the U.S., Russia, and Italy to help map out Mars. And don’t worry, your service won’t be affected, since Waze has fired up a “special space-focused server” on its web-based Waze Map Editor platform for this small group. “So far, landing sites are simply marked as Places, dust storms/volcano activity are Major Traffic Events, and broken-down Rovers [are marked] as potential road hazards.” 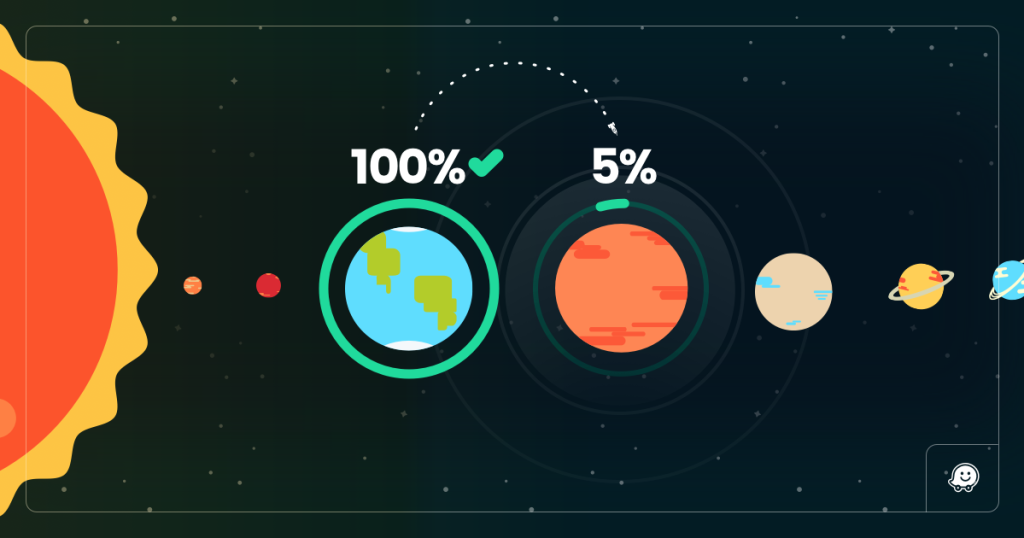 It’s like this company hasn’t heard of any other planets. Google Cloud Platform is adding a new region: “We’re looking to the future cloud infrastructure needed for the exploration and ultimate colonization of the Red Planet.” The company’s first interplanetary data center, nicknamed “Ziggy Stardust,” will open in 2018. It will power “a dedicated extraterrestrial cloud region” that will serve as “an important node in an extensive network throughout the solar system.” The whole thing started as a 20 percent project with the “Google Planets team,” which found a suitable location in Gale Crater, near the landing site of NASA’s Curiosity rover. Best of all, Google Cloud Storage (GCS) is launching a new Earth-Mars Multi-Regional location so users can store planet-redundant data across Earth and Mars. 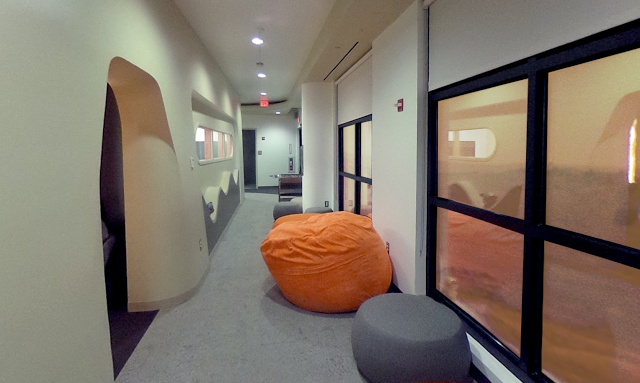 Google Netherlands has huge ambitions. Because it rains so much in the country (about 145 days a year), the Cloud Platform team has decided controlling the weather is a great idea. By leveraging machine learning and weather patterns, Google Wind controls the network of windmills across the country to disperse clouds when it’s about to rain. They can already provide sun and clear skies for everyone in the Netherlands, and maybe the rest of the world one day.

If Google Home is for the home, then Google Gnome is for the backyard. The voice-activated, hands-free tool is really just a rip-off Google Home that can tell you what animal is in your bushes, use proprietary high-intensity lasers to trim your hedges, inform you which way the wind is blowing, and really tell you anything else you want to know about the outdoors. Oh, but don’t ask it indoor questions. Google Gnome doesn’t like that.

Virtual Reality is too dependent on visual and audio experiences. Google’s Haptic Helpers take VR to the next level by simulating more than 10,000 unique experiences: “Smell the roses. Listen to the ocean. Feel a fluffy dog!”

The Google Japan input team has a modern twist on sending Morse Code: Use bubble wrap! To use it, pop specific bubbles on a bubble wrap sheet and then feed it through a bubble wrap reader to send the message.

Chromebooks have Android apps now, but Google has accessories that make you really appreciate the integration of the two platforms. There’s a Groupie Stick that helps you take large selfies using your Chromebook, a Cardboard for Chromebooks so that you can be immersed in VR via your laptop by using “any large appliance or pizza box,” and a Workout Armband to “really go big with your workout.” 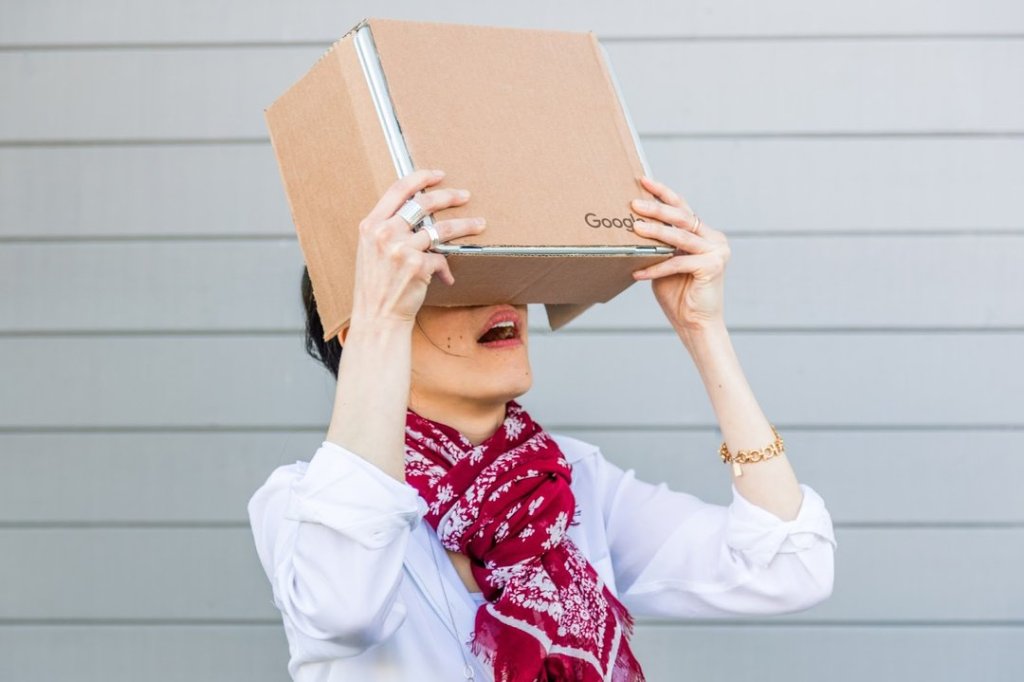 Google is no longer limited to just humans. On the Google app for iOS, you can now select “I’m Feeling Meow” or “I’m Feeling Woof” to let your cats and dogs find the info they care about. That includes looking up squeaky toys, bowls of milk, squirrels, rawhide bones, frisbees, fishbowls, birds, and scratching posts. In fact, Google Play for Pets takes things a step further with a new category of Android apps and games.

The Google Translate has added its 32nd language: Heptapod B. The Word Lens feature in the Google Translate app now deciphers circular logograms. Google’s neural machine translation system employs an encoder/decoder system that internally represents sentences as high-dimensional vectors, which then map well to the non-linear orthography of the Heptapod language. It can be interpreted into English, Chinese, Danish, Japanese, Urdu, Russian, French, Spanish, and Arabic. It even works offline.

This one isn’t a joke, but here’s what happens when you ask Google Assistant about the day. 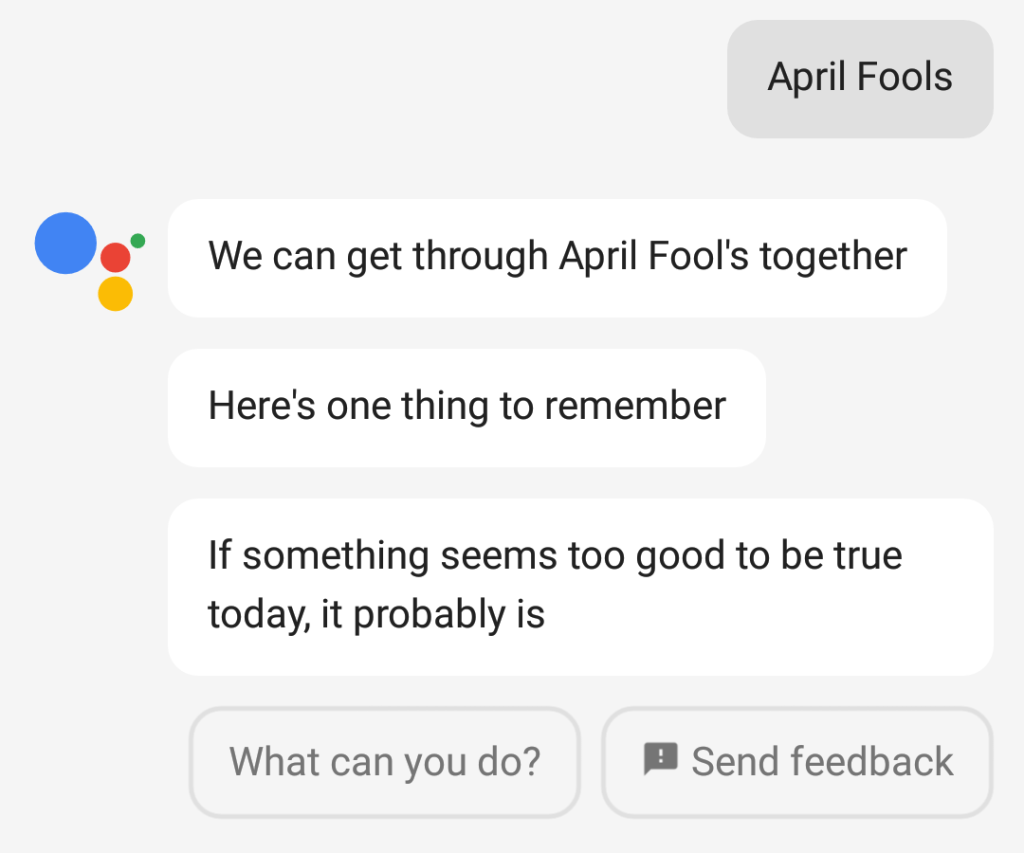