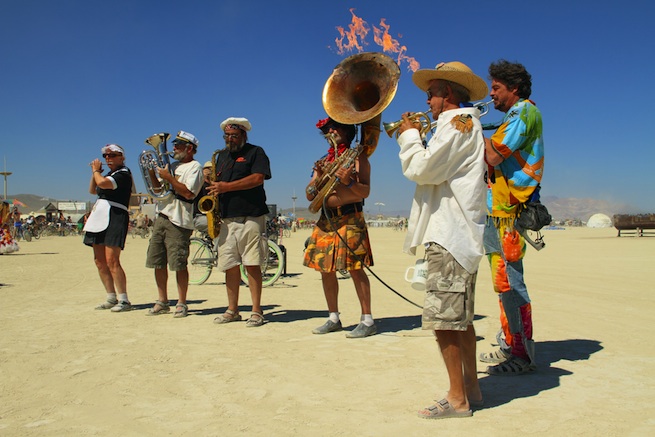 This year, a record 55,000 people made the annual pilgrimage to Black Rock Desert in Nevada to build a temporary city in the desert. For over a week, they inhabit the dusty abyss, dancing and sharing gifts, before taking off and leaving no trace of civilization behind.

Would you believe that your typical costume-wearing, drugged-out attendee at Burning Man, is almost as likely to vote Republican as Democratic or Independent? And probably works 9 to 5 in the computers or technology field, the most well-represented profession at the festival (this year, one of the most popular camps was “electronics/tech,” which catered solely to Bay Area nerds).

Newly-released data from 2011’s survey of thousands of participants reveal growing gentrification in the ranks of the attendees. Interesting revelations include:

In recent years, the survey’s organizers have thrown in the occasional provocative questions. Burning Man might be growing in popularity, but a large chunk of professional city-slickers are still not prepared to admit that they attend the festival.

The census is managed by Megan Heller, an anthropology graduate student at UCLA. With about 60 volunteers, her team travels throughout the various camps, wearing white lab coats. According to student reporter, Xandra Clark, who attended the festival, this year’s research team collected basic demographic information, as well as data about urban planning, transportation, gender and sexuality.

Data is not yet available from 2012 — it has been reported that about 11,000 people took the survey, roughly one fifth of the desert population.

This story was originally reported by the Stanford University Graduate School of Journalism’s Peninsula Press. Read the full story here.