If headphones are too bulky and ear buds make your ear canals hurt, why not surgically transform your ear itself into a speaker?

That’s what body hacker Rich Lee has done, by implanting rare-earth magnets in his ears, so he can listen to music or amplified sounds even when he’s not wearing headphones.

“The fidelity is comparable to a cheap set of earbuds at the moment,” Lee told me in an email. So these aren’t the high-fidelity bone induction implants you might have read about in science fiction novels (I think Neal Stephenson’s Snow Crash references them). They’re not connected directly to bone anyway, so he’s actually using his ear’s cartilage as the speaker diaphragm.

“However, in experimenting I have discovered ways to improve fidelity and possibly introduce stereo (currently it is just mono),” Lee said.

In addition to music, he looks forward to connecting these embedded bio-speakers to a directional microphone or a voice analysis app, so he can do surreptitious spy-like activities, like listening to conversations across the room and detecting whether you’re telling lies or not. He’d also like to connect his setup to a Geiger counter, so he can get ambient readings on radioactivity, or perhaps use it as part of a digital echolocation system of some kind.

It’s not the kind of project you’d undertake lightly. 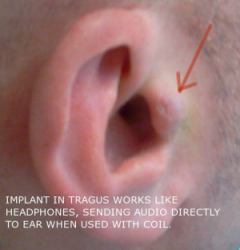 Above: A diagram shows where Lee’s implant is.

He first implanted magnets into each ear’s tragus (the flap of skin and cartilage that sticks out in front of your ear). No licensed surgeon would be willing to do this procedure, so like many transhumanists, he had to get a friend to do the operation for him. The magnets are coated so they’re biologically safe — relatively speaking.

To make these magnets into a speaker, he wears an induction coil around his neck, connected to an amplifier and, through that, to his phone. The varying currents in the coil cause the magnets to vibrate, exactly as they do in a speaker — except in this case, the magnets are part of his actual flesh.

Lee told me there are no side effects that he’s detected so far, and he hasn’t noticed interference, even when standing under power lines. One drawback: The distance of the coil from his ears makes a big difference to the volume produced by the magnets.

“It is hard to quantify exactly, but the difference in volume from having the coil around my neck vs. having it by my ears might be 50 times different in magnitude. I’d compare it to the difference between a rock concert and a faint whisper,” Lee said.

He’s now working on a second set of implants, about the size of a quarter, that will act as a magnetic resonance coupler for the magnets, enabling him to reduce the power needs of his setup and increase the volume. He didn’t specify where he’d embed these implants, but perhaps on his neck or shoulder?

Lee writes that his project was inspired by this discussion on Biohack.me, a forum for “grinders,” or people who are interested in implanting technology and otherwise modifying their bodies.

If you’re interested in this kind of body hack, check out Quinn Norton’s account of having a powerful magnet implanted in her finger, giving her the ability to detect RF fields by touch.

Would you embed a speaker into your own body? Let us know in the comments below!

If implantable tech is too much for you, consider wearable tech: It’s a topic of discussion at VentureBeat’s upcoming MobileBeat 2013 conference, July 9-10 in San Francisco. Register today!