Just as customers walk away from a $50,000 car deal because the cupholder is too small, in-flight Wi-Fi may play a disproportionately pivotal part in flyers’ decision-making.

A Honeywell survey from 2014 suggested that two-thirds of passengers choose their airlines and routes based on the availability of Wi-Fi on planes, and almost a quarter of respondents indicated they had paid more for a flight to ensure they had Wi-Fi on board. Simply put, Wi-Fi is a huge competitive advantage, and some might argue it’s even more vital to travelers than food, drink, and general comfort.

Perhaps not so surprisingly, Honeywell’s study also suggested that 85 percent of passengers would use Wi-Fi on most or all flights if it was free. Some basic services are free, but for those wishing to chomp on some serious bandwidth, they’ll most likely have to cough up some serious spondoola. This is why content companies are seeking partnerships with airlines — back in September, Netflix and Virgin America announced a tie-up to offer free in-flight Wi-Fi for TV and movies, while Amazon announced a similar deal with JetBlue for its own on-demand video service.

But it’s not always the cost that prohibits uptake. Depending on what airline you’re on and where you’re traveling, the quality of the connection could preclude you from doing much beyond sending a simple email. And if your aircraft is using cellular air-to-ground technology, then you may lose connectivity intermittently as the service shifts between networks, or lose connectivity altogether if you pass through areas that have no coverage — such as over a large body of water.

The point to all this is that there are many permutations that can affect the quality of your in-flight connection: whether it’s a satellite or ATG service; where the plane is traveling; how many people on a plane are using the Wi-Fi and what they’re doing with it; and how many aircraft and other services are using a satellite’s bandwidth at a given time.

Earlier this year, in-flight broadband provider Gogo hit the headlines when American Airlines asked a district court in Texas to interpret a clause in its contract with Gogo that stipulated the airline could seek an alternative in-flight Wi-Fi provider if it received a better offer. Gogo eventually agreed with its interpretation, the litigation was dropped, and it was up to Gogo to then convince American Airlines it could improve the on-board Internet access on some 200 aircraft.

Shortly after the spat with American Airlines, Gogo announced plans to upgrade the satellite modem it uses on its satellite-based services. After all, even with bucketfuls of bandwidth at its disposal, if the modems aren’t up to the task, the quality of the satellite technology doesn’t matter.

Anyone who’s accustomed to high-speed broadband at home or at work will find it difficult to tolerate anything slower. But for airlines and Internet providers, there are inherent challenges in upgrading the technology — it can take time to refit a plane with the right antennae and modems. Gogo’s ATG and dual-modem ATG4 service can be fitted overnight, negating the need to take an aircraft out of service. Upgrading to its latest 2Ku satellite service, which uses a Ku-band antenna for both the upload and download, requires a lot more spade work to install on the plane. It can take days, and for each day an aircraft is out of commission, this costs the airline money.

Gogo has been testing 2Ku on Aeromexico planes, while it has also signed up Brazil’s Gol and expects Virgin Atlantic to join this year — among other airlines, if things go well. But perhaps one of the more curious facets of Gogo’s business is how it tests its technology. It’s all very well simulating things in a lab somewhere in Chicago, but to ensure things truly work the way they’re supposed to, the company bought its own airplane back in 2014. 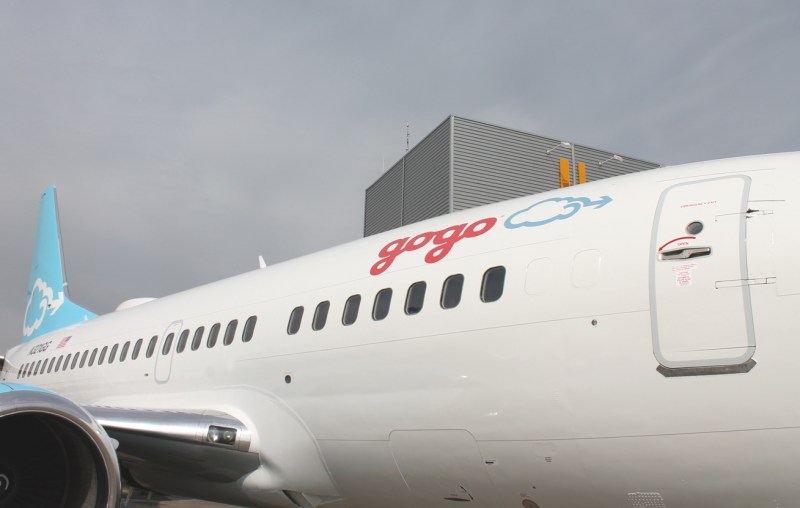 Playfully called the Jimmy Ray, after the man who founded Gogo (as “AirCell”) back in 1991, the Boeing 737-500 is Gogo’s very own airborne test lab, with more than sixty seats available to serve a myriad of scenarios. 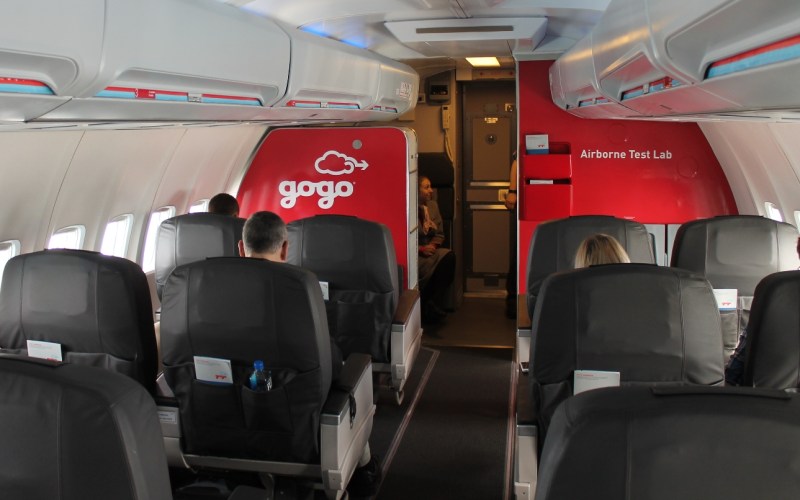 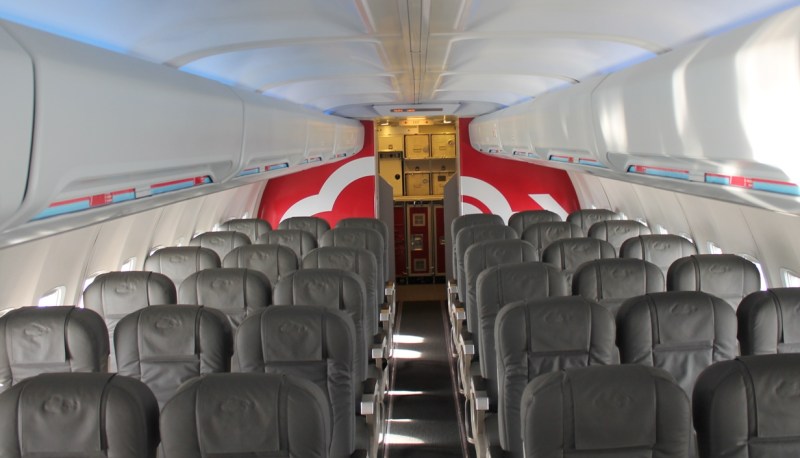 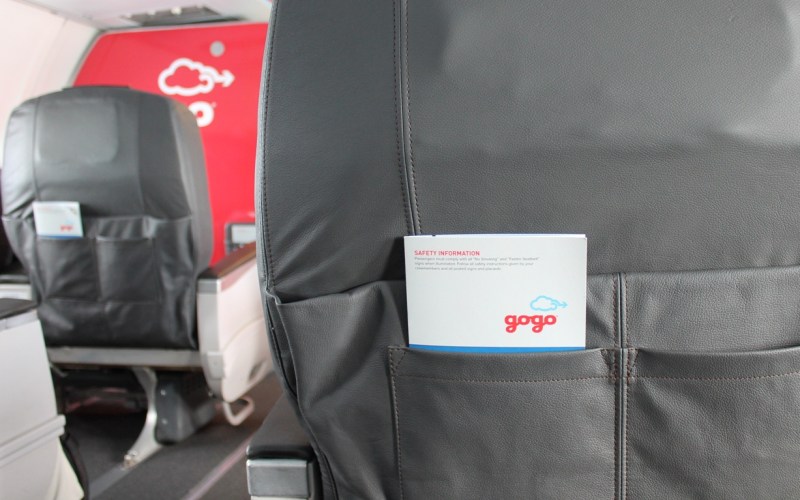 Gogo has hired its own permanent team of pilots and flight attendants to ensure it’s always able to get around — whether to take technicians and engineers into the skies to test connectivity, or to transport executives to the other side of the world for exhibitions and meetings. If you’re looking to entice a company to use your technology, what better way than to whisk them into the skies and let them experience things firsthand? 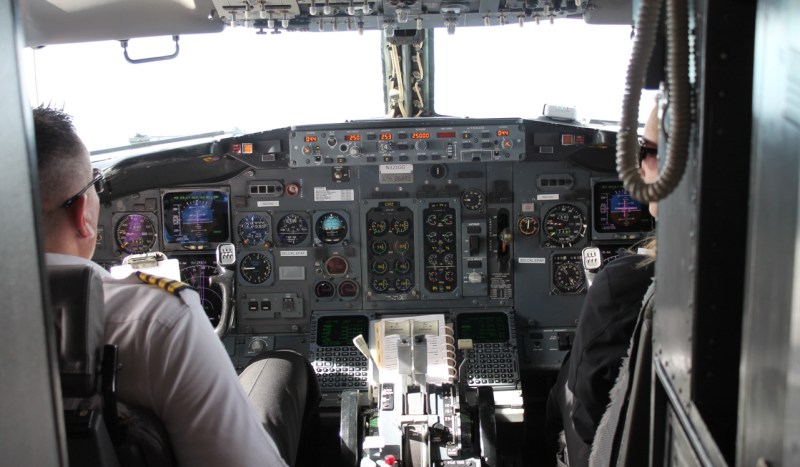 Above: Gogo has its own pilots and flight attendants

On a normal aircraft, the modem and cabling is buried in the guts of the plane, but in the case of the Jimmy Ray — well, if you try to put your bag in the overhead compartment, you may stumble upon the company’s connectivity equipment. Because they have to tweak and reconfigure things frequently (it’s a test plane, after all), easy access is needed. 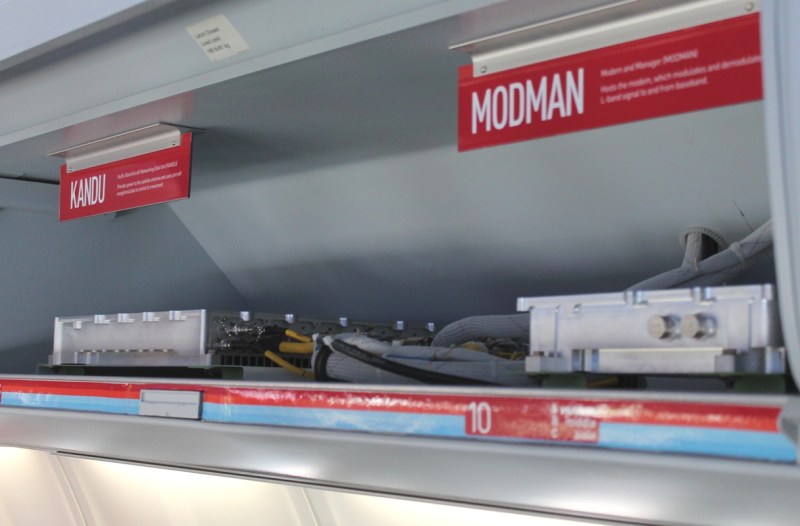 Above: Where the magic happens

Gogo promises 70Mbps peak speeds on 2Ku. During VentureBeat’s early tests of the 2Ku technology, we generally achieved between 10 and 20Mbps on the download, and around a quarter less on the upload — though the numbers weren’t always predictable, as you can see here. It’s also worth noting that there were 40 or so devices, including laptops, phones, and tablets, stress-testing the network. 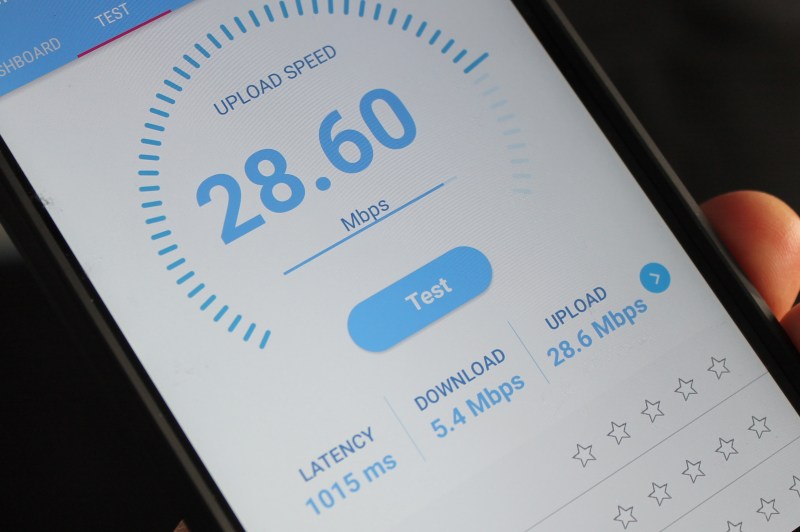 From my own experience, top-line speeds promised by providers are rarely ever achieved in reality. But anything close to those kinds of speeds, so long as they are consistent and across the board, will be more than fine for most people. I mean, there is simply no need for anything more than 30Mbps on a plane, and most passengers would get by just fine on half that. Those who play bandwidth-intensive games online may disagree.

From an entertainment perspective, Gogo’s 2Ku will enable live TV to be beamed directly to travelers’ personal devices, encapsulated as IP data. The specific service will vary by market and airline — so a U.K.-based airline may offer domestic channels such as the BBC, for example.

Gogo also told VentureBeat that it tries to curb the upload speeds to discourage voice and video calls (Skype, WhatsApp, FaceTime, etc.) — this is partly for safety reasons and partly because nobody really enjoys listening to other people’s one-sided conversations in a confined space.

With any market, though, competition is good. As we saw with the Gogo / American Airlines spat, airlines understand the value of in-flight Wi-Fi. The “threat” of moving to a rival provider is real, with provisions for this often included in contracts.

Virgin America, for example, uses Gogo’s ATG technology on some aircraft, but elected to use ViaSat-based satellite technology for its newer aircraft. And earlier this year, ViaSat announced a tie-up with Boeing to help introduce 1 terabyte Internet to market. While the technology isn’t exclusively for commercial airlines, it gives an indication of what could be around the corner for travelers. ViaSat says its technology promises “hundreds of Mbps of in-flight connectivity services and video streaming for commercial airlines, business jets and high-value government aircraft.”

That’s in the future, though — we’re not quite there yet. But we’re edging ever closer to a day where the Wi-Fi on your journey from New York to London or Berlin to Tokyo will be indistinguishable from that in your house or office.