SAN FRANCISCO — Technology and social media are saviors that will expose corrupt politicians and help save the environment from the forces of evil.

Gore’s hair may be almost all gray, but his conviction that technology can change things for the better has not faded. In a far-reaching chat that touched upon the power of social media, the perils of not acting on rising carbon dioxide levels, and how bogus politicians pose a direct threat to environmental progress, the former vice president did not hold back. What was surprising was his not-so-subtle revulsion at how things in Washington are now. 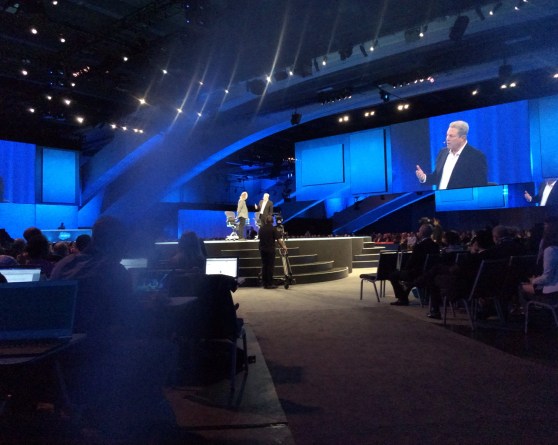 Above: Neil Young and Al Gore get into it at Dreamforce

“The Internet is now more powerful than TV,” Gore said, pointing to the revenue generated by e-commerce and digital advertising.

Pointing to the logjam that has paralyzed Washington, Gore said it was up to the people and their computers to help reverse what he called the rapid decline of the torpid U.S. political system.

The more people blog about it, and launch Kickstarter campaigns, for example, the better off we’ll be, Gore said.

“Social media and some of the bloggers are starting to make a big difference. But we really need to speed things up,” Gore said.

On the economy, the U.S, is “still struggling to get out of the Great Recession,” Gore said. He pointed to his desire to see the end of a continuing trend of American companies offshoring jobs.

Ultimately, though, people using technology intelligently have the power at the end of the day, he said.

“When people feel strong enough about something, they have the power in their hands,” Gore said.

Young, wearing his trademark untucked flannel shirt and jeans, said he was onboard with what his old friend was saying. He pointed out that while he’s not that technically inclined, he knows plenty of people who are — and who can help. But Young told Gore that his ability to preserve the environment, despite his huge global popularity, had limitations.

“I can only hit so many power chords, Al,” Young said.

Young heaped praise on former Apple brainchild and chief Steve Jobs for launching iTunes and giving musicians a platform to reach a mass audience and take more control of their work. And for Richard Branson too, for his plans on commercializing space travel.

Young also begged his old friend to keep up his environmental crusade and make another documentary, like the 2006 film An Inconvenient Truth, which won an Academy Award.

“I really hope you make more of those movies,” Young told Gore. “We could use an update.”