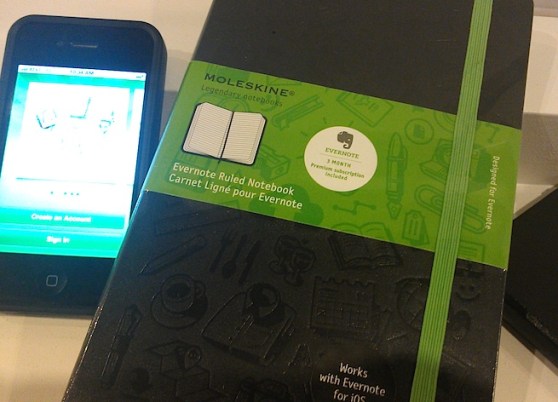 So I’m guessing that techie hipsters everywhere will get excited about the new Evernote-optimized notebook that Moleskine just announced.

(Also in Evernote news today: The company announced Evernote Business, a version of the note-stashing and -searching tool for small and medium-sized companies.)

A page-capture function in the latest version of Evernote for the iPhone and iPad helps straighten out the photos you snare of each page, correcting for distortions and erasing shadows. Also, you can use stickers to tag each page. Evernote will recognize these stickers and apply corresponding tags to the new note.

It even has cute little pink Skitch arrow stickers.

Moleskine chief executive Arrigo Berni told us about his company’s partnership with Evernote — its first with a software company.

“Nobody wakes up in the morning and says, ‘I’m going to live a digital life,'” Berni said. “Well, maybe a some people. But most people live in both the analog and digital worlds.

“We are bridging paper and digital.”

The integration works partly thanks to the tiny dots that make up the horizontal rules. (A graph-paper version is also available.) The Evernote software recognizes those dots and uses them to correct the page’s alignment in software.

Note that you don’t need these pricey notebooks to do this kind of trick. Inexpensive document-scanning apps for both Android and iOS also do alignment-correction for pages you photograph and even sync with Evernote and other cloud-based storage services. And those apps will work with any rectangular piece of paper, whereas Evernote’s app only does its magic with these special Moleskines.

The stickers, however, are an unusual touch.

The partnership came about, Berni said, partly because people who downloaded Moleskine’s iOS app requested Evernote integration. Also, Index Ventures, which invested in Moleskine in late 2010 and holds 15 percent of the company, suggested a partnership and made introductions to the Evernote executive team.

Moleskine’s Evernote Smart Notebooks will cost $25 for a pocket, 3.5-inch x 5-inch version and $30 for a larger, 5-inch by 8.25-inch version, and should be available starting October 1. Both come with a three-month subscription to Evernote Premium. Moleskine is taking orders on its site now.