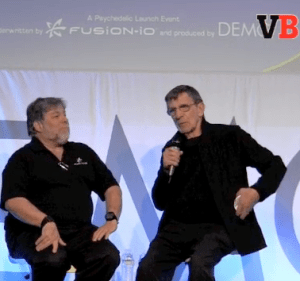 Ever wonder what it would be like to put two of the biggest icons among geeks into the same room? Well wonder no longer avid VentureBeat reader.

Having the co-creator of arguably the most important tech company in the world on stage at the same time as the man famous for captivating entire generations of hopeful space travelers as Star Trek’s Spock is every bit as awesome as you’d expect. This was the first meeting between the two men since their first encounter in 1988 when they casually walked passed each other on Moscow’s Red Square without saying a word.

Fortunately, Nimoy and Wozniak were much more talkative this time, as you can see in the video of the interview embedded below.

After Woz admitted to stealing an usher’s name tag at a local theater to sneak into the midnight premiere showing of the first Star Trek movie, Nimoy followed up by asking him about the practicalities of some of the fictional technology used in Star Trek.

“Is it possible to create a universal translator?,” Nimoy asked, which prompted Woz to explain some of the current technologies available — namely, using Google Translator through a mobile device.

Other highlights include the plausibility of artificial intelligence, references to the race of cyborg drones called the Borg and more.

Anyone who wasn’t able to watch the live stream of our Enterprise Disruption event yesterday should check out our video coverage, including Nimoy’s discussion from earlier in the night.