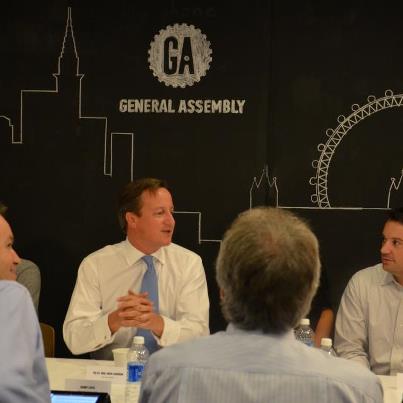 Could you sell the British Prime Minister on your startup idea in 30 seconds or less?

World leaders gathered in Manhattan today for the United Nations General Assembly. As part of his trip, British Prime Minister David Cameron made a surprise visit to another kind of General Assembly, this one with a “.ly” in its domain name.

The young founders at the New York headquarters of General Assembly, a global network of technology entrepreneurs, were blown away when Cameron arrived and peppered them with questions about their startups.

Seth Bannon, a graduate of tech accelerator Y Combinator told me he spoke at length with the British Prime Minister. “He was keen to talk about the success of New York’s tech ecosystem and to glean lessons he could apply over the pond,” said Bannon, founder of a startup called Amicus.

“He was particularly interested in the role institutions like General Assembly can play in catalyzing such success,” Bannon said. London’s own startup scene is booming, particularly in a hipster area in the city’s East End known as “Silicon Roundabout.”

As much as he wanted to hear about our individual companies, he was even more interested to learn about the community at General Assembly that supports us,” said Keya Dannenbaum, who had a few minutes of the British politician’s time to pitch her startup, ElectNext.

Jonathan Hefter, founder and chief executive of Neverware, also had the opportunity to present the world leader with his elevator pitch. “It was a pleasure being able to pitch the Prime Minister of England,” said Hefter. “He was very interested in hearing about our companies and seeing how we work.”