It is difficult for startups and entrepreneurs to procure a .com domain name that isn’t a ludicrous combination of words and numbers, so when former Googler Sanmay Ved managed to buy a pronounceable six-letter word on a .com, he was delighted. But the domain he bought was no ordinary URL — it was Google.com.

On Tuesday of this week, Ved — who worked in online media sales at Google for more than five years, but now works at Amazon — says he was messing around on Google Domains, the Internet giant’s domain name-registering service. On a whim, he entered “Google.com” into the search box and lo-and-behold it showed up as “available,” and he was able to purchase the domain for a mere $12. 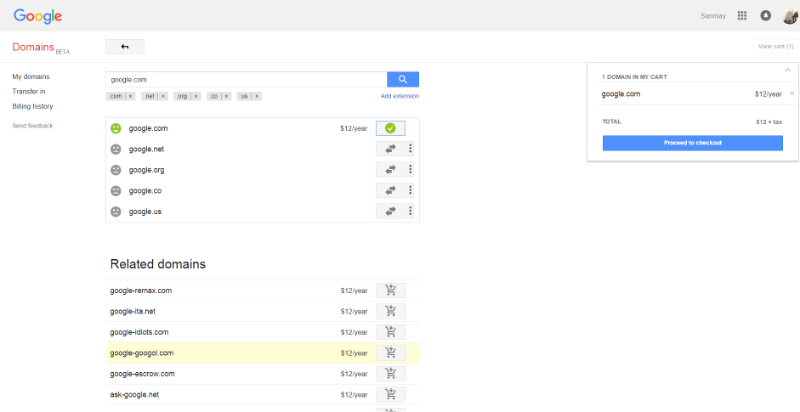 Ved received confirmation via email, and a text message saying that his credit card had been charged. However, he does note that two emails he received were from “sc-noreply@google.com” and “wmt-noreply@google.com,” which he says “is not the norm when you book domains via Google Domains.”

Based on the slew of screenshots Ved has published to his LinkedIn blog post, and the descriptions he gives of his experience, it does indeed sound like he had managed to procure Google.com. However, his purchase was short-lived — he received an order cancellation and refund shortly after from Google, an easy process for the company given that it personally owns the registration service.

It’s more likely that there was some sort of bug in Google Domains than Google simply “forgot” to re-register what is the most famous domain name in the world. Though such a scenario isn’t entirely without precedent — back in 2003, Microsoft managed to let Hotmail.co.uk slip through its fingers, and it was bought by somebody. It all ended well, however, when the individual agreed to pass ownership back to Microsoft.

While it’s not entirely clear how Google.com came to be available, Ved does say he has reported the experience to Google, which has acknowledged the incident.

Source: How I Ended Up Purchasing & Owning Google.com via Google Domains [via Business Insider]