The surveillance age is here, and it’s tough not to feel a bit helpless about it.

With cameras pinned to buildings, embedded in smartphones, and floating in the sky, it’s impossible to imagine going outside and not being photographed at every turn. And the rise of Google Glass will only make it worse.

But perhaps we shouldn’t surrender quite so easily. As the New York Times points out, researchers are already working on so-called stealth clothing that offers a variety of ways to combat unwanted surveillance and photography. One solution, developed by School of Visual Arts design professor Adam Harvey, is Stealth Wear, clothing that foils drones by suppressing the wearer’s heat signature.

Devices like Google Glass are core to the wearables trend, which is hitting big this year. We’ll be debating the future of wearables at our big MobileBeat event in San Francisco next week. Buy your ticket now! 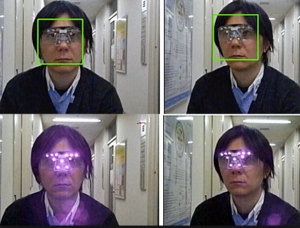 “Collectively, Stealth Wear is a vision for fashion that addresses the rise of surveillance, the power of those who surveil, and the growing need to exert control over what we are slowly losing, our privacy,”  Harvey writes on his website.

Another, probably more practical, solution is Harvey’s Camoflash, an “anti-paparazzi fashion accessory” that emits its own flash when it detects the flash of paparazzi cameras. The idea, while certainly an attractive one for celebrities, could one day be bad news for the likes of celebrity gossip blogger Perez Hilton, who is well-known for his annotated paparazzi shots. (“We’re not happy about this,” Hilton wrote back in 2009, mostly facetiously.)

A similar anti-camera approach comes from researchers at Japan’s National Institute of Informatics, who are working on a visor that foils camera sensors and facial recognition via a face-blurring light.

If these concepts prove anything, it’s that the only defense against technology-enabled surveillance (besides never going outside) is technology itself. Hate the idea of Google Glass owners photographing your face in the street? Wear a pair of anti-Google Glass sunglasses. Uncomfortable with drones scanning your thermal signature from thousands of feet in the air? Wear an anti-drone hoodie.