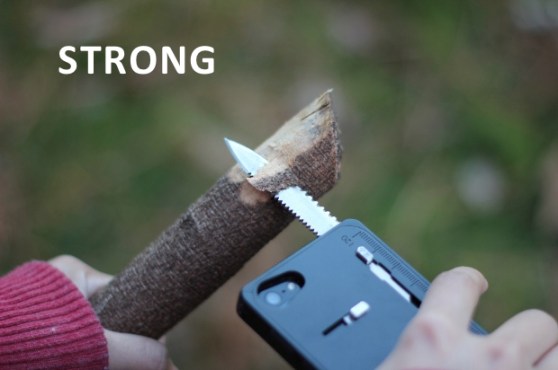 What happens when you cross a Leatherman, a bike repair tool, and an iPhone case?

If a crowd-funded project on Indiegogo succeeds, you’ll get the TaskOne, from a small Atlanta-based outfit called TaskLab. The TaskOne is an iPhone case with a bunch of tools attached to it: A knife, screwdrivers, Allen wrenches, spoke wrenches, wire stripper, ruler, and of course, a bottle opener.

“We developed this case over the last six months out of a desire to have a small set of tools with us at all times,” TaskLab founder Addison Shelton said in an email to VentureBeat. “Leathermans were too bulky, and we weren’t going to carry one on our belt, but we wanted a significant tool to use for small bike and household repairs.”

I’ve seen iPhone cases with bottle openers before but never one with all these tools. If the promotional photos are to be believed, you’d be able to use this case to cut meat, saw wood, drive screws, fix your bike, and more.

It’s a bit ridiculous, yes, and you probably won’t want to subject your precious phone to really rugged situations. One slip of the whittlin’ knife and the stick of wood you are trying to carve could wind up poking out your iPhone’s Retina display. But the project illustrates the endless outpouring of creativity, from sublime to absurd, that people have applied to iPhone cases in the five years since Apple first launched the smartphone.

The tools slide out rather than folding out like a Leatherman or Swisstool. That slight inconvenience would be offset by the case’s light weight (89 grams) and slim dimensions (4mm thick) plus the fact that you can remove the knife and other sharp, dangerous implements, leaving them at home before you attempt to go through airport security.

“Despite my extensive engineering and manufacturing background, one of the biggest challenges I have faced was the low-budget grass-roots PR campaign,” Shelton told us. Judging by the response from gadget blogs and Indiegogo backers, it’s a challenge he has successfully met.

The TaskOne is about halfway to its fundraising goal of $30,000, with 15 days to go. Too late to order one for Christmas … but if you’re lucky, you might be able to get one by spring: Shelton promises to deliver finished cases by April, 2013.