What if you could take all those tweets you blast out during the day and ruminate on them in a place where your mind is free to wander and relax. Introducing Shitter, a new startup that, for just $35, will turn your tweet stream into four rolls of toilet paper. The homepage tagline reads, “Social media has never been so disposable.”

The site is credited to a team of four developers who live in New York and Sydney. They call themselves Collector’s Edition, a new-breed entertainment company that seems to craft clever web sites and services. Previously, the group launched a site dedicated to explaining the meaning of the word “Mate” (a Down Under version of the seminal “dude” commercials).

This product gives a whole new meaning to the term “data exhaust”.

“Obviously this is fairly tongue in cheek, but we’re reasonably pleased we monetized Twitter in a way that avoided advertising,” said founder David Gillespie (Are you listening Dick Costolo?). “We all have other jobs, though would obviously like to make it a full-time thing. As you saw, The Meaning Of Mate was the first thing CE did, now this. The direction is still settling, but I think there’s some kind of course to chart around just trying to entertain people. I don’t know where the revenue is, it may very well wind up needing to be funded by brands when the right project comes along. I can’t imagine Kleenex having put their name to Shitter though!”

When you really think about it, $35 is cheap for a product that’s nearly perfect performance art in its simultaneous embrace and mocking of our social-media obsessed world. 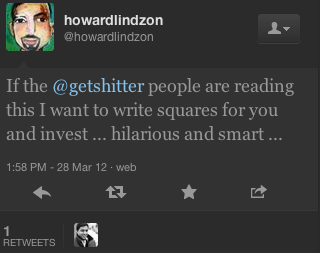 We caught wind of Shitter first through Tweetdeck, but the always spot on @CBM reached out to say The Next Web got the exclusive.