The Remedy Entertainment sci-fi adventure Quantum Break is 178.1 GB on the Xbox One X. If, like me, you have a 1TB data cap with your internet service provider, downloading that one game will consume more than one-sixth of your total for the month. With games at these sizes, consumers now have to consider both the cost of the game and the effect it will have on their limited internet service. That should worry Microsoft, Sony, Netflix, and any other company that trades in data-intensive entertainment.

With the launch of the Xbox One X, 4K gaming is now on PCs and twfo of the three major consoles. This is part of an irreversible transition to that standard. Amazon and Walmart showcase 4K TVs. By the time the 2018 gift-giving holidays roll around, you may have to put in some extra work to find a new 1080p display.

But 4K gaming has a consistent ongoing cost-increase associated with it. And if you have a data cap, that cost could turn into a constant, nagging anxiety in the back of your mind. 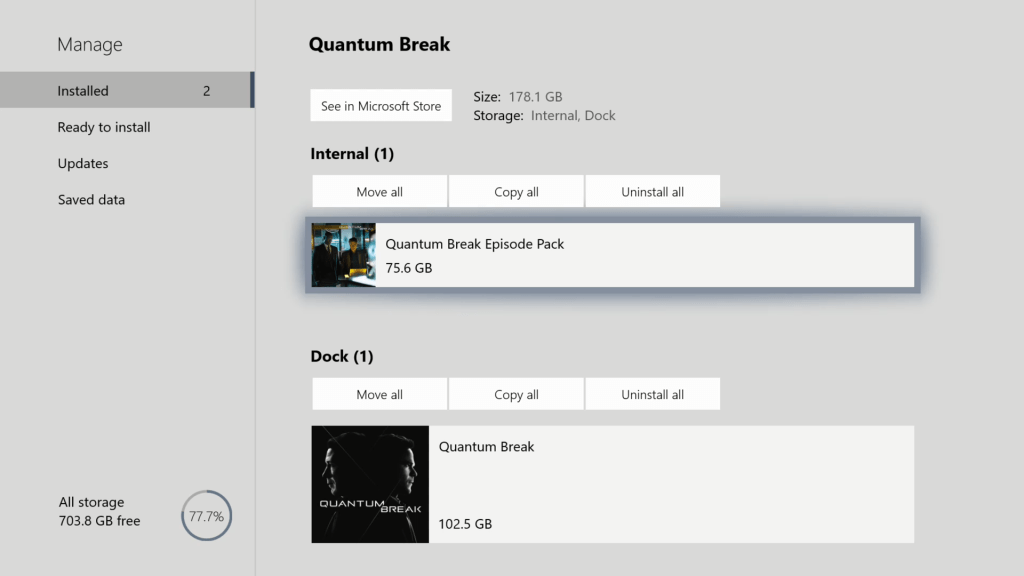 I have a data cap. My Comcast plan, which is the only cable-modem ISP available where I live, permits me to download and upload a total of 1 terabyte per month. That’s the same as 1,000GB (the exact data cap is 1,024 GB), or almost six copies of Quantum Break. But that total counts everything you do on your home network: email, web browsing, YouTube, Netflix, iTunes movie rentals, uploading family pictures, backing up your data, and everything else. Comcast claims that 99 percent of people don’t go over a terabyte in a calendar month. But I bet that more people will cross that threshold as they start playing 4K games and watching 4K video.

“This data plan is based on a principle of fairness,” reads Comcast’s website. “Those who use more Internet data, pay more. And those who use less Internet data, pay less. It is important to know that more than 99 percent of our customers do not use a terabyte of data and are not likely to be impacted by this plan, so they can continue to stream, surf, and download without worry.”

I’m a special case. I download a lot of 4K games on my PC, PlayStation 4, and Xbox One. I also upload a lot of video to YouTube and broadcast high-quality livestreams on Twitch. When I combined my normal habits with the Xbox One X at the end of October, I ended that month 683 GB over the 1,024 GB cap. We’re not even 72 hours into November, and I’m already at 340 GB total. A huge chunk of that is downloading two or three full Xbox One games, but a lot of data is also just going toward updates for these 4K games. That’s why buying physical games will help, but you’ll still end up having to download massive updates with UHD content on PS4 Pro or Xbox One X.

October was the second month in a row I went over my cap. I have only had Comcast for two full calendar months. Thankfully, the ISP gives you two credits that enable you to go over your limit without having to pay extra. Going forward, however, I will have to either pay $10 for every 50 GB I go over the limit or I can pay a flat $50 to remove the cap completely.

I have three options when it comes to dealing with this going forward. I can pay the $10/50GB fee, I can pay the $50 unlimited charge, or I can try to meter and limit my data usage. I have a job to do. I can’t be worrying about my data cap when it comes to downloading a new game. I’m going to get on the phone with Comcast at some point in the next week, and I’m going to give that company its money while also hoping another ISP moves into my neighborhood.

But the point is that I have to make this decision because of 4K, and a lot of people are going to face a similar choice. This could have put a drag on game sales that Sony, Microsoft, and other publishers should worry about. I bet most people won’t want to spend that $50 for unlimited data. Most normal households can probably stay under 1 TB by skipping over a game here or there. Comcast gives you a warning when you’ve used almost all of your data, and people will realize that if they purchase a game and it puts them over their cap, that game actually costs $70, not $60.

Even if people do spend $50 for unlimited, that’s $50 fewer dollars each month to spend on games. Above: Need for Speed: Payback running at 4K on the Xbox One.

And while this is a real problem under ISPs that use data caps to generate more revenue, the size of 4K games may force even unlimited customers to spend more money. Quantum Break has a 94.7GB patch to unlock its Xbox One X enhancements. If your internet is 20Mbps, it’ll take more than 12 hours to download and install. My slow, unlimited Centurylink DSL is one of the reasons I jumped to Comcast over the summer. I went out and spent more to get faster speeds, and I of course ended up with the data cap in the process.

And what’s frustrating here is that data caps aren’t going away. The Broadbandnow ISP-tracking service keeps a list of providers that have a data cap, and that roster now includes more than 200 different ISPs. This business tactic is growing right at a time when content creators and distributors, like Microsoft and Netflix, are trying to usher in the 4K revolution, but we don’t ever hear stories about those companies putting pressure on Comcast, Time Warner, and Cox to increase those limits or do away with them completely. With a lack of competition in the ISP market, you would hope that companies that rely on customers with lots of fast data would step in and try to solve this problem. But that’s not happening at the moment.