Dell’s Alienware division has unveiled a new “Legend” design for its Area-51m, a desktop replacement gaming machine. It’s one of a number of gaming announcements from Dell and Alienware at CES 2019.

The Area-51m has 9th Gen 8-core desktop processors from Intel, 64 GB of main memory, 2.5 Gbps ethernet, upgradeable graphics, and a 17-inch 144 Hz screen with a narrow bezel. It has 50 percent more performance and 32 percent less volume than its predecessor. It also includes the latest Tobii eye-tracking technology and the Alienware Command Center. The Alienware Area-51 with Legend design will be available January 29 for $2,550.

The machine’s full name is “Alienware Area-51m with Legend design.” Alienware said it evaluated a variety of design concepts and chose one that was the “biggest and boldest departure from its current look and the sea of sameness in the industry.” That’s a bit sassy, and it’s in keeping with the Alienware brand.

“We’re excited to come to this year’s CES with some truly groundbreaking products, next-gen software, and strategic partnerships that will bring more people to experience PC gaming and advance the industry,” said Frank Azor, vice president and general manager of Alienware, G Series and XPS at Dell, in a statement. “The legend design answers the call for more and better from our gaming community, and the new G Series laptops will make PC gaming even more accessible to those looking for high-performance gaming at a cost they can appreciate.”

The new Legend design is optimized with thermal and cooling technology for overclocking, improved AlienFX lighting, ultra-thin screen borders, and a new “three-knuckle hinge” design that reduces the overall dimension while creating a stronger assembly. Legend also introduces two optional finishes, Lunar Light and Dark Side of the Moon. 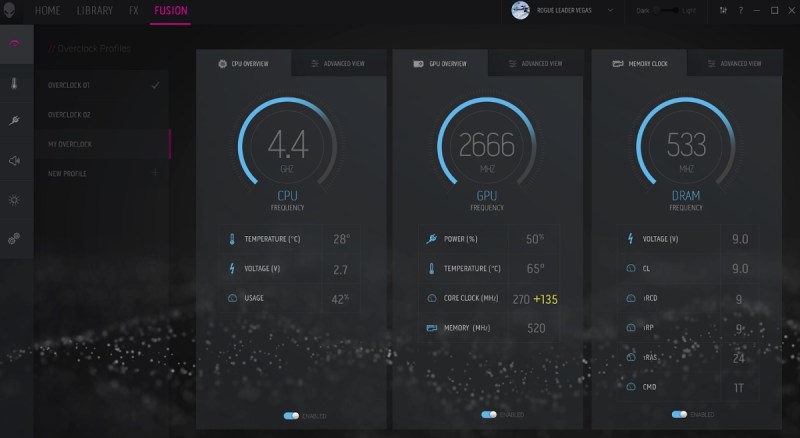 Above: Alienware Command Center tells you how your machine rates on certain games.

The Alienware Command Center is a dashboard for optimizing PCs for games. Based on feedback, Alienware made more than 30 updates to its proprietary to this central hub that allows gamers to customize all aspects of their experience including system and peripheral lighting, power management, thermal control, overclocking, audio, and content organization.

It now offers GPU overclocking (and underclocking), allowing changes to take effect at the system level and work in conjunction with CPU and RAM overclocking as well as thermals.

The Alienware Arena App (for the U.S. on iOS and Android) will let gamers receive push notification alerts for access to limited quantity full game codes, beta codes and DLC from anywhere instantly.

Dell also introduced its redesigned gaming laptops under the G5 and G7 brands. The Dell G5 15 ($1,000 on January 29) and Dell G5 17 ($1,380 on January 29) sport 15-inch and 17-inch screens, respectively, with 8th Gen Intel CFL-H quad and hex core processors. They have 144 Hz refresh rate screens with Nvidia G-Sync, the Alienware Command Center, and four-zone RGB keyboard with customizable backlighting. The Dell G5 15 Special Edition ($1,100 on January 29) is also available in alpine white, with a clear panel on the bottom of the system to show off the blue fans of the cooling system.

Alienware also said that Team Liquid will build a second Alienware Training Facility, or esports tech center powered by Alienware in the Netherlands, in addition to the existing facility in Santa Monica, California.

And Alienware announced a hardware partnership and sponsorship with Riot Games and its League of Legends Esports events.