Those chips are aimed at keeping AMD’s performance lead over its rival Intel in the mobile and server markets. AMD CEO Lisa Su showed off the new chips in a keynote speech at CES 2021, the online-only tech trade show.

AMD is launching its Ryzen 5000 Series mobile processors for gaming laptops and thin-and-light notebooks. These eight-core x86 chips are built with a 7-nanometer manufacturing process (where the circuits are 7 billionths of a meter apart). They are also based on the Zen3 design for processor cores, which can process instructions 19% faster per clock cycle than Zen2 cores.

The H-Series focuses on top performance in laptops for gamers and content creators, while the U-Series focuses on thin-and-light notebooks with great battery life. The chips have four to eight cores and they range in power consumption from 15 watts to 45 watts.

These chips “carry with them many of the same things that made the desktop launch so darn strong,” said Robert Halleck, director of technical marketing, said in a press call.

One of the top chips is the AMD Ryzen 5980HS mobile processor, which has eight cores and 16 threads. It runs at a 3.0GHz base and can boost to 4.8GHz and consumers 35 watts. It’s not as fast on a single thread as Intel’s fastest chips, but it shines on multiprocessing.

“We’ve never had a stronger showing,” Halleck said. “In 2021, AMD will be in the lion’s share of the highest-end gaming notebooks.” 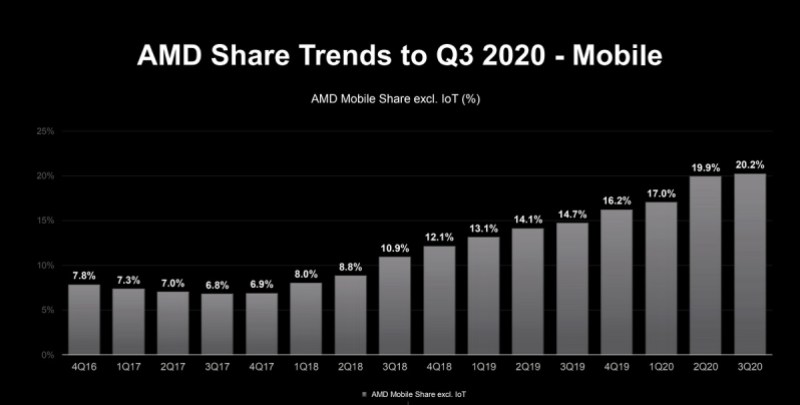 Above: AMD has been gaining share in mobile processors.

Meanwhile, the AMD Ryzen 5900HX is the fastest chip, running 14% faster than Intel’s Core i9-10980HK processor on a single thread. Over CPU performance is about 37% faster, AMD said, and it is 21% faster on game physics performance. Su showed Horizon: Zero Dawn running on a PC at more than 100 frames per second.

The AMD Ryzen 5800U processor can perform 22% faster on productivity apps such as Excel, or 7% faster while browsing with Microsoft Edge. It gets about 17.5 hours of battery life with general usage.

AMD also previewed its third-generation Epyc processor for servers, which it said will have the highest x86 server processor performance on both per-core and throughput measurements. It is designed to power cloud services. 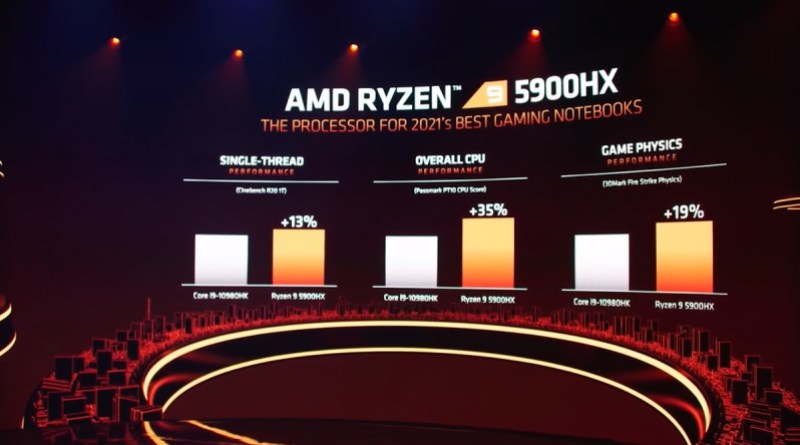 Above: AMD Ryzen 5900HX chip compared to the competition.

“You’re going to see us continue to drive the performance crown that we established with [code-named] Rome,” he said. “We continue to have very strong deployment with the big clouds.”

Su talked about how AMD is using tech to solve some of the world’s most challenging problems. She said that AMD helped with COVID-19 research by donating over 12 petaflops of supercomputing to the problem last year.

She also spoke with Panos Panay, Microsoft’s chief product officer, to discuss how the companies have adapted to new ways of communicating and collaborating, placing significantly higher demand on digital infrastructure and making devices like the PC even more essential. 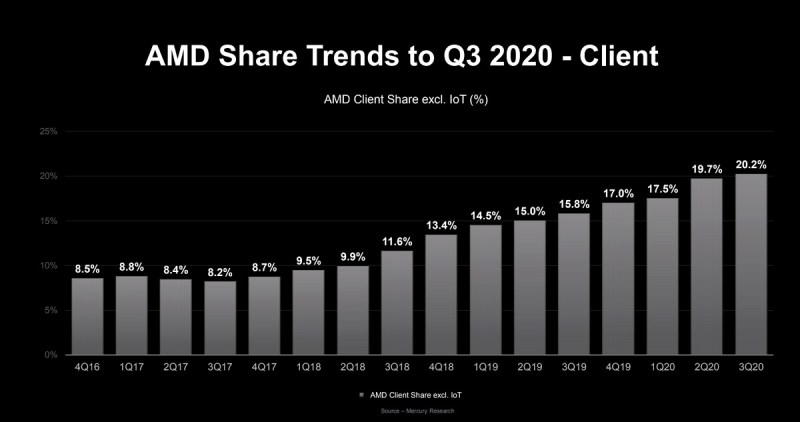 Microsoft Teams now supporting 150 million daily active users, and AMD partners with Microsoft on cloud data centers. She also spoke with HP CEO Enrique Lores as well as Lenovo CEO Y.Y. Ching. Those are some pretty high-powered folks in computing. They said that the PC has proven more indispensable than ever in the pandemic.

AMD’s chips are also in the Microsoft Xbox Series X/S and the Sony PlayStation 5 game consoles.

Su said that AMD will bring the RDNA 2 architecture for its graphics processing units (GPUs) to gaming laptops, driving performance at 1440p and 50 frames per second. Those GPUs are coming in the first half of the year, for both mobile and desktop PCs.