Ayo: A Rain Tale is a quest for water and survival in sub-Saharan Africa. It’s the debut from Lebanese indie studio Inkline Games, who wants to shine a light on an ongoing humanitarian crisis that affects millions of people. It will be available for PC and Mac on November 9.

A lack of clean drinking water imperils 319 million people in sub-Saharan Africa, according to the nonprofit The Water Project, which works to address water scarcity in those communities. It has huge ramifications on health, sanitation, and education, as children miss hundreds of schooldays because they’ve fallen ill from water-related diseases like cholera. The Water Project also notes that 72 percent of those who are sent to fetch water are girls and women, hurting their opportunities to attend school and to work. In Inkline’s game, you play one of these girls, Ayo, who has to brave harsh environments and enemies to help her family survive.

“Video games have the potential to effectively translate and simulate different types of physical and emotional experiences,” said Inkline founder and executive producer Ghaith Fleifel in an email to GamesBeat. “This ignited the question of why not employ this medium to translate an experience that users may connect to on a humanitarian level, and raise people’s awareness about harsh realities. Since water is a basic human right, and an indispensable resource crucial for the survival and development of communities, the issue of water scarcity in different regions around the world presented itself as the most pressing and vital cause to support.”

Fleifel and his team were inspired by research they did on the crisis in sub-Saharan Africa, and they wanted to communicate the reality of the dire situation. But they were also conscious of balancing the educational aspects of the game along with entertainment value to draw the players into Ayo’s world. 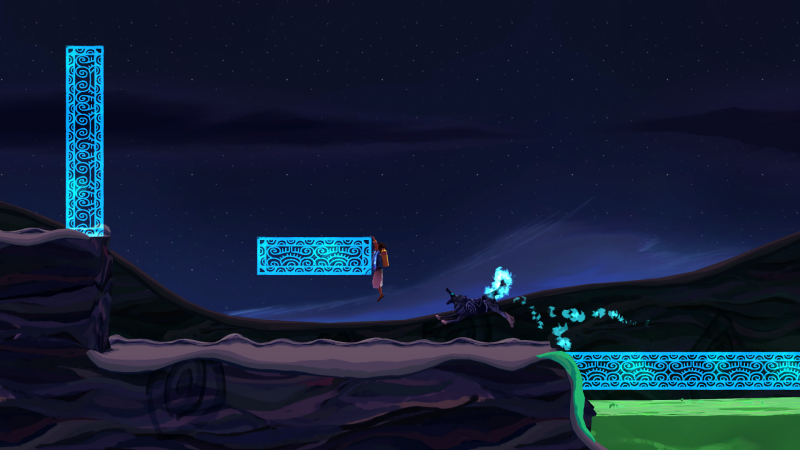 Above: Ayo escapes one of the enemies on her journey.

“We knew early on that Ayo: A Rain Tale should tell a real-world story in a mythical narrative, where Ayo’s journey would take an unexpected turn, eventually leading her to reclaim her right of water from Ja, the thunderstorm bull residing in his mythical realm,” said Fleifel. “The balance was preserved in the game’s content by designing the characters and environments atop the real sub-Saharan culture and setting.”

Though Ja is the primary antagonist, Ayo also faces off against other enemies in her quest. These are also given a mythological flavor, though they’re based on the real danger that people face.

“Women and children are prone to different types of dangers while on their water fetching trips, and to be able to translate their experience, we referred to the sub-Saharan setting and culture for inspiration when choosing the enemies that Ayo faces,” said Fleifel. “However, we injected a mythical twist to the appearances, behaviours and attacks of the enemies to induce a different emotional experience in the player when facing each animal.”

Though this is Inkline’s first game, it’s already thinking ahead to future projects. Fleifel says that they want to explore more ways to create titles around humanitarian crises and situations around the world.

“To give a voice to humanitarian struggles, we hope we will be able to devote more time and resources to create more games that would shed light on different universal causes by giving the player a chance to experience those struggles through a symbolic, interactive, and enjoyable gameplay experience,” said Fleifel.