My brain does hurt a little bit right now.

I don’t think it can fully grasp the future vision that Euclideon CEO Bruce Dell is peddling. Well, peddling suggests a sales job rather than a real life working product; but he says that his team has solved a huge problem with hologram tables, and will solve many more of the challenges in the years ahead.

So, time to take a deep breath and get my inadequate head around the story of Euclideon, and in particular Dell’s work in graphics technology that—if proven all above board and kosher—is destined to revolutionize many industries around the world, including gaming.

Why that’s a big deal? We’ll get to that. First, where did Euclideon come from?

“Twenty years ago. I believed there was another way to make 3D graphics work,” says Dell. “They’re all done with polygons, but I thought they could be made out of little atoms…the problem is that the more of them you have, the slower your computer will run.”

Okay, reinventing the popular gaming notion that graphics made with polygons, and depth supplied by bump maps — now we’re talking about atoms.

If I wasn’t on the other end of a call, but sitting in front of Dell, he would have witnessed one of those blank-faced nods that suggests understanding, but the lack of PhDs in computer science, graphics, and god knows what else, in fact is saying, “I’ll just believe you because I don’t know how to pursue the details of the atom as a graphics image.” 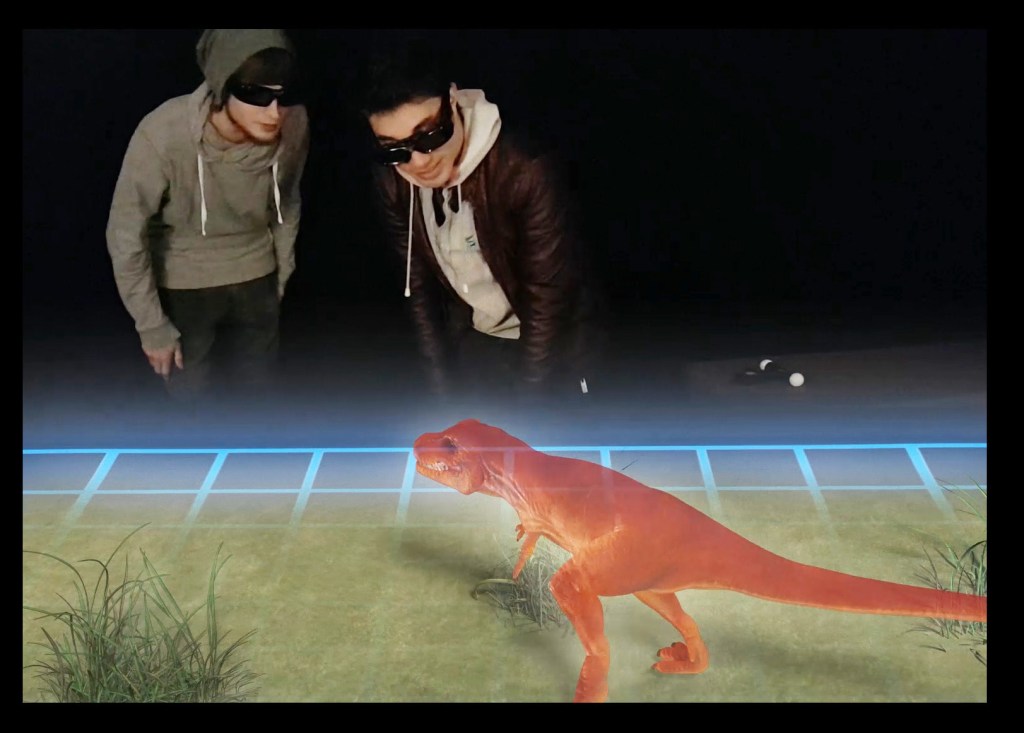 Above: The sunglasses are simple method of viewing the hologram images.

Working his theories—unpopular or unexpected though they may be (in fact, some considered it futile research)—Dell pursued his belief in the atom graphics process. “After 13 years, I had achieved and refined it so much it was working extremely well,” he says. The apparent breakthrough led to articles in significant technical magazines such as New Scientist and Popular Science, which boosted Dell’s profile and ultimately resulted in folks from one of the top tech companies in Australia joining his crusade.

“Now we had unlimited graphics power,” he says of the ultimate result of this technology. It also caused great debate, if not outright online arguments, with who Dell describes—without naming names—as the head of Minecraft stating that it couldn’t be done while the head of Crytek suggested it could, it was just considered not possible.

But the technology was not going to be applied to games. Instead, Dell focused on laser scanning and the massive graphics and processing requirements of geo-spacial companies. These companies would take a laser scanner to a location and scan it to create a 3D model. For example, scanning a house so that it could be shown remotely by a realtor. The problem was that the laser scanners in use at the time had limitations.

“Take a laser scanner into a house, and when you moved, you’d lose 99% of the points, and they would redraw when you stopped,” Dell explains. But with the unlimited ability to run what’s called point cloud data, it was surmised that you could run the scanners on locations much larger than a house.

Related to this was the understanding that you cannot stream 3D graphics; they need to be loaded and then they can be used. Dell’s technology addressed that conundrum. “We progressed the technology to the point where it could stream 3D graphics off the hard drive and over the internet,” says Dell. The application of this achievement has not gone unnoticed around the world, with Dell telling us that companies and countries as diverse as the French railway system, the Hungarian and Turkish governments, and the Tokyo traffic authority all using the technology. 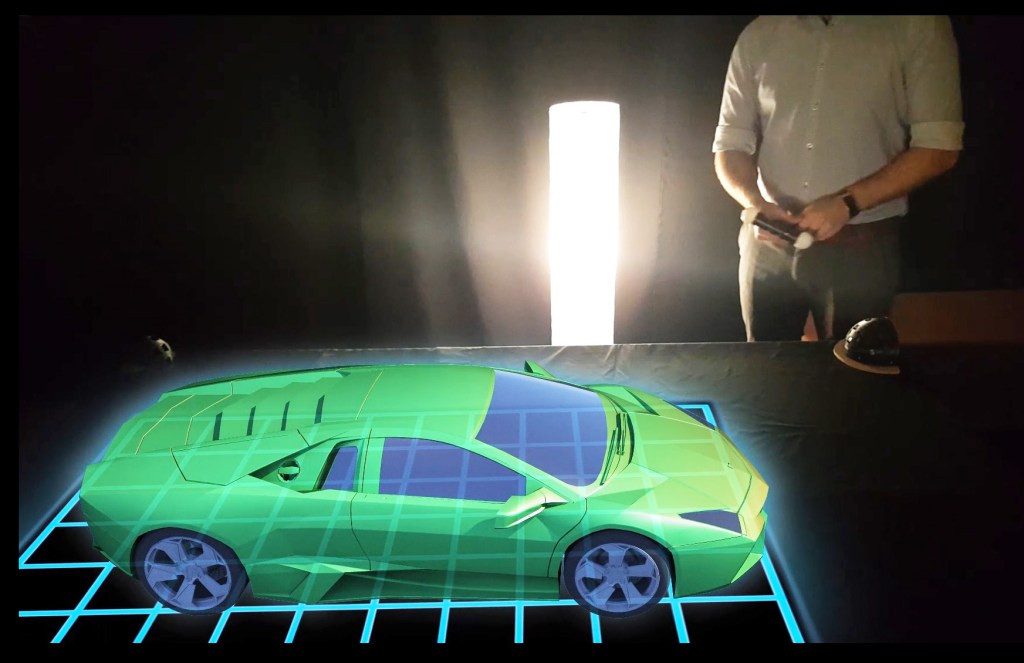 Above: The device in his hand allows the image to be scaled and manipulated easily.

No to VR, AR or Hololens…

Now arrives VR with all its potential and all its challenges as a technology. Dell stated that Oculus Chief Scientist Michael Abrash, suggested at a presentation that VR technology would require 1,000 times more polygons before games looked as good as the best on PC and console. (Abrash apparently suggested that solving that issue with VR technology would at least generate a ton of rewarding jobs for scientists and researchers over the next few years, so if you wanted a silver lining…)

For Dell, VR reminded him of 3D TVs: they seemed like a good idea at the time, right until it was proven that nobody wanted them. Working with businesses and the military, the barrier for these business clients was wearing the bulky headsets.

Augmented Reality looked more intriguing to Dell, but ultimately still posed the same challenge for businesses reluctant to use the required headsets. Microsoft’s Hololens was also intriguing, but Dell understood that hologram tables had a problem: one user could see the image perfectly, but a second user would have a distorted view.

“We went looking to see if there was a way to do a hologram table that could support more than one user,” Dell says. “We went into very weird ends of science that went into changing the fields of light-waves, then changing them back for different users,” he added. More importantly, he states: “We’ve actually been successful.”

“We’ve been able to produce a table where more than one person can see it…I can see the front of the building and you could see the back,” says Dell. With the table R&D now complete, Dell states that “we’re the first in the world to make a multi-user hologram table where you can just wear simple sunglasses.”

When do we see the proof? Dell is currently raising capital for the manufacturing that Euclideon will handle itself, courtesy of its 240 different component suppliers.

If that capital is raised and manufacturing begins, the first tables 1.5 meters by 1.5 meters will roll off their assembly line and into businesses such as real estate companies who will map out a shopping center in hologram form before breaking ground on actual construction. Dell says that he’s already received requests for tables up to 4×4 meters, which presents new problems of projection that his R&D team needs to resolve in the months and years ahead. 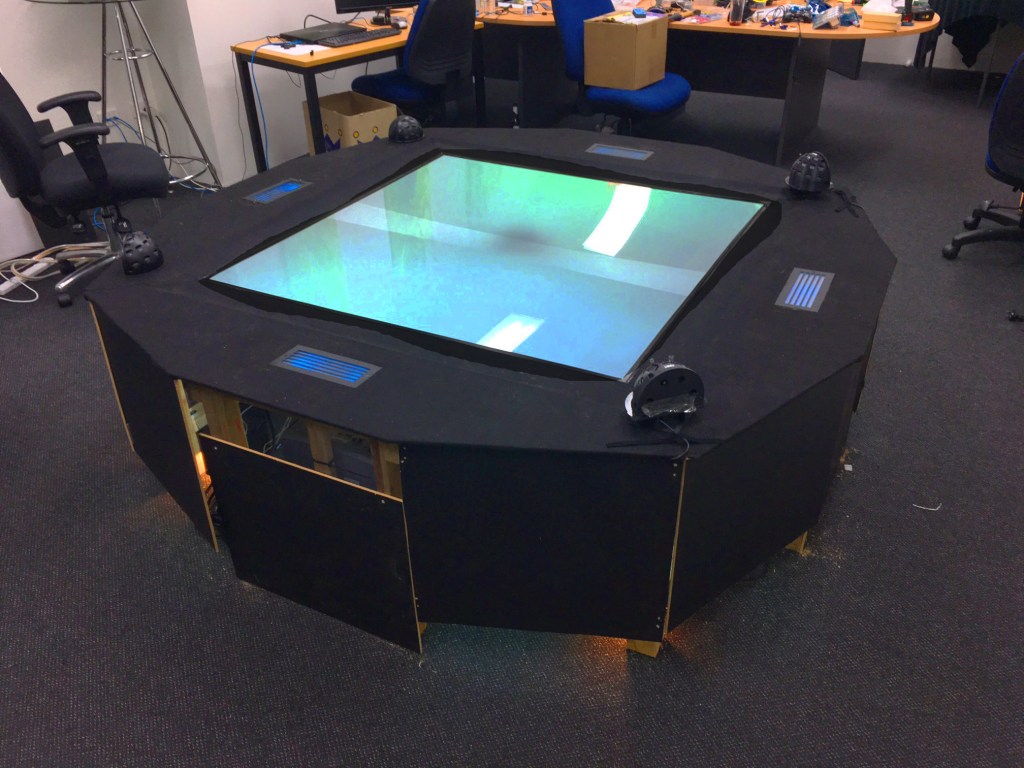 Above: Prototype model of the hologram table.

But the claims that any amount of data can be streamed anywhere presents a future where businesses share one hologram table and multiple users will be able to assess the content. For the games industry, Dell suggests the technology means much better graphics running much faster than they currently do with polygons and graphics cards. “A company like Crytek has a lot of artists, but when we can go out to a forest with a laser scanner and scan it, it means the cost of resources goes down dramatically,” he suggests.

Dell intends for Euclideon to be the leading hologram company in the world, blending the atom graphics technology and internet streaming into these devices. He may even be open to sharing the technology for others to use. It’s bold, ambitious, and controversial. Dell even suggests that the company is figuring out—maybe even has figured out—how to allow a hologram table to be visible without the use of glasses at all.

If you scoff, you’re not alone, but if it just so happens to be the real deal, the potential for games and for businesses of all types is staggering.

You get your head around all that?