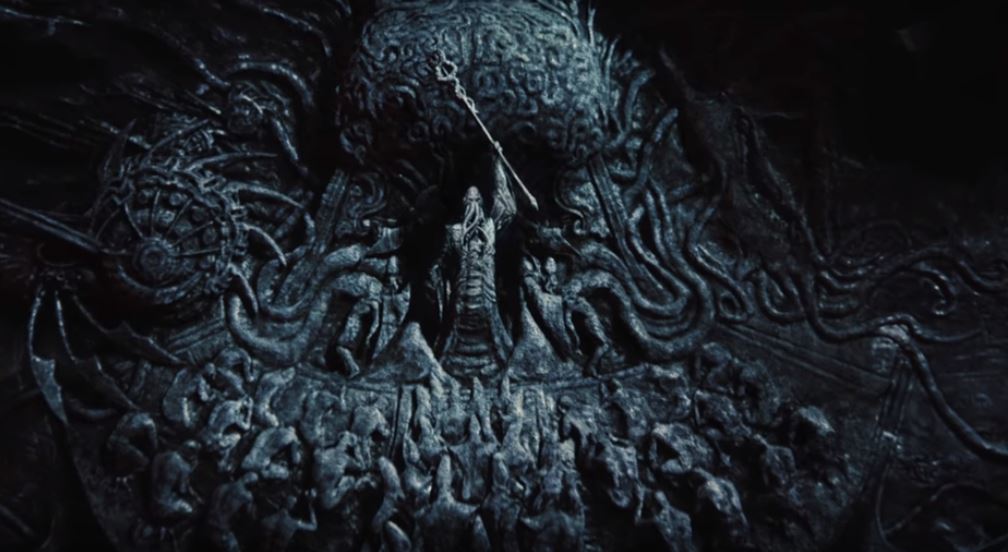 Above: This mural on the illithid nautiloid shows the power of the long-dead illithid empire.

GamesBeat: What about that illithid and its nautiloid — what is its association? Is it a renegade from a hive, or is it part of a hive? Does this hive have a different agenda than other mind flayer hives?

Smith: I can’t tell you that. Whew. That’s a really good question. But I can’t answer that one. You will find out. You’ll find out all of this. None of this is unanswerable because I’m being vague. It’s just that these are really good questions, because they touch on things that we ask ourselves all the time. One thing that you obviously know, knowing D&D very well — when you get to see the intro video again, you probably even noticed this, but the very first shot, do you remember what it is? It’s a mural inside the nautiloid. You’ll see that it has a lot of background on what this particular nautiloid is, but also the history of the illithid empire is told by the murals in the nautiloid. You can find out a lot about it just through the visuals there. It’s very deliberate that it’s the first shot you see in the entire game, a history of the illithids. Then, when you finish character creation and the red dragons attack, you see it shattered. That’s very important. Even with the mind flayers, obviously we want to make them scary. They are terrifying and we want them to be intimidating and terrifying. But we also want to dig into what they need and what they want and who they are. There’s more to them than just — you’ve picked up on so much already.

GamesBeat: Vampiric mind flayers exist in previous editions. You have a character who’s vampire spawn. Is there any interaction there?

Smith: There’s a lot of stuff we’re doing with the illithids. We talk about this with Wizards constantly. Every single time we come up with an idea of what we want to do, if we want to push the mind flayers, push the ideas around ceremorphosis, then we speak to them about it. And yeah, in the broadest possible terms, whenever we introduce a possibility, then we’re going to push it as far as we can.

GamesBeat: Gale brings up the Darklake, which of course is from the Underdark, which makes me suspect that — is he a drow?

GamesBeat: When you’re playing a tabletop RPG campaign, often those first five levels, the first beginning of getting to know your character, are the best part of the game. Whereas in a computer role-playing game, that can be the hardest and the worst part. They can be slogs.

How do you try to bring the magic that comes from starting a tabletop campaign into starting a computer game?

Smith: Partly by making sure that we have fairly quick escalation. We give an immediate, urgent problem. That helps to give direction. That’s really important.

The other thing is by having lots of choice from very early on. The first clicks you’ll make in the entire game are to press start and then do character creation. If you choose an origin, or you choose a custom character, what we immediately do is say: These choices are very important, and we immediately try to reward you for them. If you play an origin, then you’re going to get a lot of unique dialogue, unique sequences, and unique characters. If you play a custom character, you’ll get a lot of unique gameplay because of your background, class, and race. Then very quickly, you decide who you are, and then you decide what you do. You decide how to react to things. That allows us to build more and more layers where we can essentially reward you for choices. The deeper you get into the game, the bigger the repercussions of that.

But one of the things I’m really glad we showed this today, but we didn’t show the consequence of it, is when you spoke to Min​thara, the drow. That’s not early-early in the game. It’s still in the first act. It’s still very early, but it could be 20 or 30 hours in depending on how you play and how much you do. But when you do what he did and you sell out the tieflings, then you can burn down the entire region of our Act One. You can kill every character in it. You can do all of that just through your own agency, or you can do it through story choices. That completely changes the way the story goes. It completely changes how that region feels and how it looks. It completely changes how your party deals with you. Really it’s by front-loading all that stuff, not by saying this is the climax of the game, but saying this is just a thing you can do in act one.

GamesBeat: The last few years we’ve seen elements of Baldur’s Gate III hinted at in a bunch of D&D products, going back to Storm King’s Thunder. Now we’ve started with Spelljamming ships. There’s the pirate captain mind flyer down in Halaster’s dungeon. There’s githyanki coming into that. And, of course, Baldur’s Gate itself. Did you, as Larian, take those elements and say, OK, let’s try to bring in the last few years of D&D into Baldur’s Gate III? Or did Wizards say, “Can you do this?”

Smith: It works both ways. One of the things Swen [Vincke, the head of Larian] will say again and again to people is that — Swen loves Spelljammer. If we say that we’re doing this, then they have to do it as well. There’s a lot of cross-pollination. This is a big game for them as well as for us. There’s aspects that they decided to explore more because we started to touch on them, and there’s aspects that we draw on that they do. But it’s a collaboration, and very much a cross-pollination of ideas. We’re very canonical. We’re very firmly entrenched in what is going to happen to the future of the Sword Coast and the Forgotten Realms and other places. We’re pushing very deep. But we get ideas from them and they get ideas from us. Mostly we get ideas from them because they have decades of them that we can draw from. But they pay attention to what we do, and they plant seeds in other places as well.