Electronic Arts gave us a first look at the next expansion pack for Battlefield 1, a Russian campaign dubbed In the Name of the Tsar. It’s part of EA’s attempt to hang on to its players year-round, keeping them engaged with the World War I game that has been one of its biggest hits in the history of the Battlefield series. And by keeping them engaged, EA hopes to keep its dedicated fans away from rival games like Call of Duty.

The pack is the “most extensive expansion pack in the history of the franchise,” with eight new multiplayer maps that will launch over the course of the summer. EA’s DICE studio is working on the expansion. EA made the announcement at its EA Play event at the Hollywood Palladium. EA’s event is the first ahead of the Tuesday opening of the Electronic Entertainment Expo (E3) tradeshow, one of the game industry’s most important events of the year.

EA launched its They Shall Not Pass DLC in March. EA said the pack will expand the game to the largest front of World War I. At the outset, players will battle it out on six new maps and join the fight as the Russian Army, including the Women’s Battalion of Death. This marks the first time that fans can play as a female character in Battlefield multiplayer. 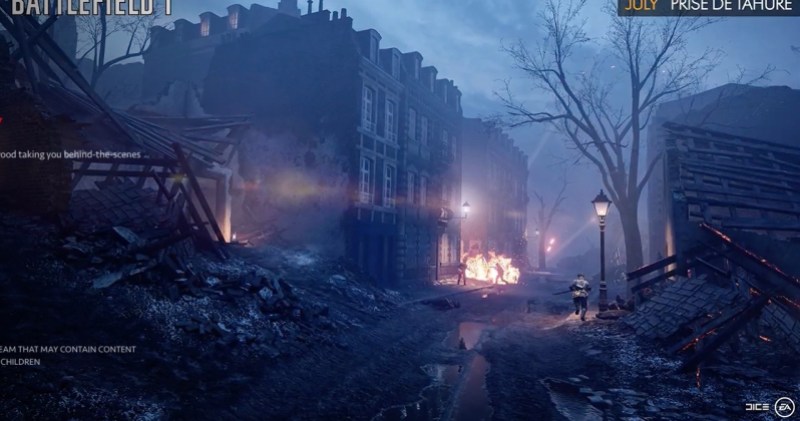 In addition to this, Battlefield 1: In the Name of the Tsar will deliver 11 new weapons, six new maps, more Operations, more vehicles (such as the massive Ilya-Muromets Heavy Bomber), a the new Supply Drop game mode, new persistence and ways to customize your play style, and more.

EA will deliver monthly updates, new maps, and in-game events throughout the summer, leading up to the launch of In the Name of Tsar. In addition to the six maps, two other new maps are set to launch, along with the continuation of Premium Friends, allowing Battlefield 1 Premium Pass owners to bring their friends to play alongside them on Premium maps until Gamescom in August in Germany. At Gamescom (another of gaming’s biggest events of the year), DICE will also unveil a competitive experience in Battlefield 1, based on feedback from the Battlefield community.

The first new map to come to Battlefield 1 foPremium Pass owners over the summer will be Nivelle Nights in June followed by Prise de Tahure in July. Both are extensions of Battlefield 1: They Shall Not Pass. In Nivelle Nights, players will engage in close quarters infantry combat through a vast network of trenches, while in Prise de Tahure, French troops desperately try to hold onto re-captured heights in the Butte-de-Tahure region. In conjunction with the release of Prise de Tahure, Premium Trials will begin, allowing all players to try maps normally only available to Premium Pass owners.

Fans attending EA Play will have the chance to go hands-on with the Lupkow Pass map from the upcoming Battlefield 1 In the Name of Tsar and experience the 64-player mayhem first hand.

Andrew Gulotta of EA said that Nivelle Nights will have night play. Patrick Soderlund, EA’s head of studios, said more details will becoming out at Gamescom.