The next Battlefield game is going back to World War II and has the name “Battlefield V” internally at publisher Electronic Arts. After breaking this story last week, I wanted to follow up with a handful of details that directly address some of the other leaks floating around that I’ve confirmed through sources familiar with Battlefield V development.

I called EA for a comment on this story, and the publisher declined the opportunity to provide a statement.

The image of the Battlefield V “dev build” screen from my story comes from a leaker on the Discord community channel for YouTuber Drakesden, who is known for spreading a lot of Battlefield-related information. I was able to verify the image independent of that community. In addition to the image, the leaker detailed a few tidbits from the game — some are accurate and some are misleading. I’ll break these down, but also feel free to listen to us discuss this story on the most recent episode of the GamesBeat Decides podcast.

Battlefield V — a name that could still change (EA and DICE reportedly used this as placeholder for Battlefield 1 as well) — does take place during World War II, but the leak claims it follows the German side exclusively. That is not the case. Battlefield V’s campaign will work a lot like Battlefield 1 with the episodic ministories that follow soldiers from all over the globe.

In Battlefield 1, you played one mission as a British tank driver in France, another as an American pilot fighting off a German raid while traveling to London, and a third as a Bedouin rebel working with Lawrence of Arabia. Expect Battlefield V to use this structure to take players to various theaters throughout the second World War.

I’d also point out that this jives with my understanding that DICE is building Battlefield V using a strategy it started before Battlefield 1. The studio is trying to maintain some internal consistencies between Battlefield 1 and Battlefield V, and that may include bringing back voice actors like Katherine Kingsley, a voice announcer in Battlefield 1’s multiplayer mode. On January 22, she posted an image on Instagram of herself in a booth recording new lines for a project that included “#battlefield” in the caption. 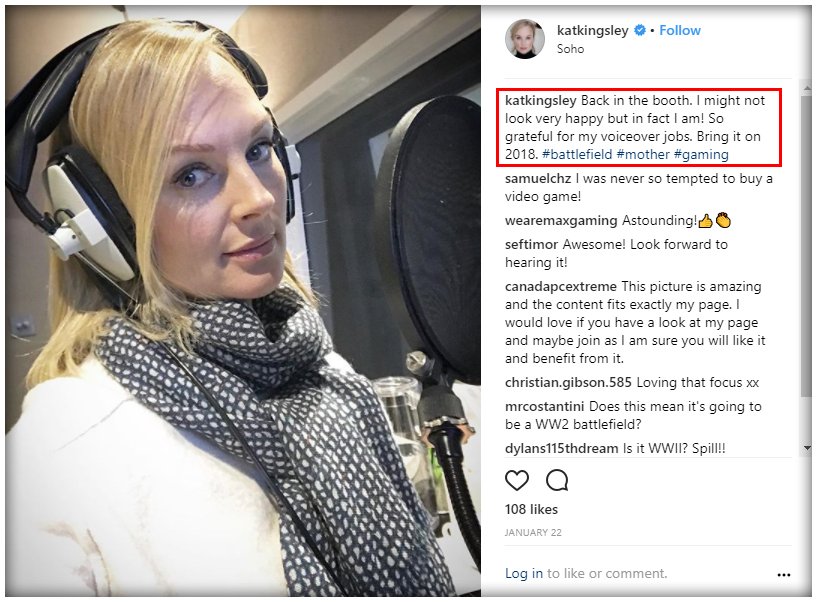 Above: We are losing objective apples!

The leak also mentioned “cooperative” play, and that is something that DICE is working on for Battlefield V. The leak suggests that this is a special mode that runs squads of players through “randomly generated Conquest missions,” but the studio could expand the scope beyond that. I also don’t know if this will support splitscreen, but DICE knows this is a question that gets asked alongside any promises of co-op.

The leak alleges that players can also now go prone on their backs, which is similar to how going prone works in Tom Clancy’s Rainbow Six: Siege from publisher Ubisoft. This is accurate, and it should give players more movement options during competitive multiplayer in DICE’s shooter.

Finally, as USGamer reported last week, Battlefield V will have lootboxes, but they are cosmetic only. This is similar to how lootboxes worked in Battlefield 1, but expect EA and DICE to expand on this and to emphasize that this isn’t pay-to-win. EA is still trying to figure out how to undo the public-relations mess it made with Star Wars: Battlefront II’s loot boxes that unlock upgrades for your characters, and loot boxes that stick strictly to cosmetics in competitive modes is one of the things on the table for EA in its non-sports games, free-to-play, and mobile games.