It seemed like Call of Duty’s battle royale would tear people away from PlayerUnknown’s Battlegrounds when it launched last week. And that is potentially starting to happen. PUBG held strong through the weekend with no obvious effect on its peak concurrent players on Steam. But now that the week is here, fewer people are logging into play the last player-standing shooter, according to Steam’s stats.

Call of Duty: Black Ops 4 launched October 12. On PC, it isn’t available on Steam. Instead, players must purchase it through Blizzard’s Battle.net service. And publisher Activision Blizzard does not share stats like peak concurrent players. So we can only look at data for PUBG. And those numbers reveal a sharper dip that corresponds with the release of Black Ops Blackout (BOBO).

Here is how the last four days compare to the same periods from the previous two weeks. Surprisingly, PUBG didn’t lose an abnormal amount of momentum on the Saturday and Sunday after BOBO debuted. This past weekend’s average peak concurrent player count is down 6.5 percent from the previous Saturday-Sunday period. The game has seen similar drops in the past.

But it’s the Monday and Tuesday numbers that show a more dramatic drop. For the past couple of weeks, PUBG has hit a peak concurrent player count of around 940,000. That was true on the Monday and Tuesdays on October 1, October 2, October 8, and October 9. That changed yesterday when PUBG only hit a peak concurrent player count of 876,000. And then today’s peak of 842,000 is even lower. That’s down 10.4 percent week-over-week. 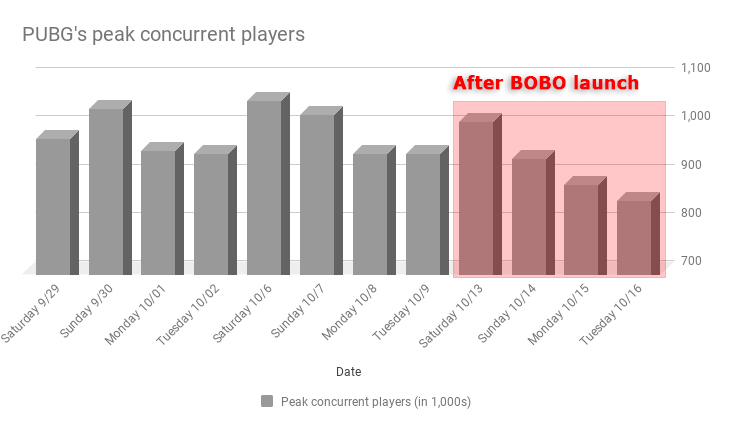 This isn’t exactly a strong trend yet, and PUBG could recover quickly after people try BOBO. But it seems safe to assume that people are trying Call of Duty’s take on battle royale. At the same time, if BOBO is having an effect on PUBG, it isn’t a sudden knife to the heart.

PUBG is resilient for a number of reasons. A significant chunk of its players are in China and other markets where Call of Duty is not nearly as popular or isn’t releasing at all. PUBG also still has plenty of adherents who are always going to prefer its way of doing things.

But I think that we may see BOBO take a larger toll on PUBG over the coming days. Call of Duty has a poor reputation on PC, but Black Ops 4 seems like an excellent port. People may start jumping on the game after seeing that Activision kept its promise to support PC. Likewise, players may also want to see if their favorite livestreamers on Twitch end up sticking with BOBO. If Shroud or Ninja play it for a weekend and then go back to PUBG or Fortnite, players may decide to stick with those games.

Finally, BOBO will have to rely more heavily on word-of-mouth just because fewer people have the Battle.net launcher installed. Sure, Battle.net is on a lot of systems because World of Warcraft and Overwatch, but Steam has more than 130 million registered users. It is near-ubiquitous. So players will need a reason to download or open Battle.net, and that will take some time.