If you ask a podcaster, YouTube creator, or Twitch streamer which microphone you should pick up to sound like a professional, many will recommend products from audio-recording company Blue.

But Blue, which is well known for its Snow and Yeti USB microphones, is expanding its product lineup to hit a wider audience of consumers that prefer consuming audio as opposed to producing it. That is where the company’s new $400 Satellite headset comes into play. It works well for consuming gaming and music at a desk or on the go, and it works either wirelessly over Bluetooth or via an optional 3.5mm cable.

At that price, you should expect a lot from a headset — and Blue has delivered cortex-rattling sound, active noise canceling tech, and a stylish look. The Satellite blows away the wireless Razer Man O’ War headset, and it’s an appreciable improvement over the $200 Logitech G933, and its extra features may justify the premium price for some people. But the Blue Satellite also has some problems that should give you some pause.

Clear sound with all of the extras

Even over Bluetooth, the Satellite sounds incredible. Headsets with built-in amps are becoming more popular as more people educate themselves on why you would want a separate power source for your music. This has more companies building simple, all-in-one solutions like the Satellite. And while you’d probably still get better results from a bulky dedicated amp, the Satellite delivers crisp, blaring high tones while also delivering heavy bass drops. The 44mm drivers also provide the mids with distinction and loudness with no distortion.

You can listen without the amp turned on, but you’ll hear enough of a difference that you’d only ever choose that option if you’re trying to save battery.

But a feature you won’t use all of the time is the active-noise cancellation (ANC). Blue claims that its ANC tech is capable of eliminating outside noises without removing some of your music. That’s difficult to test, but I can say that the ANC works well. It is great at countering room noise or the hum of a loud car, and I never felt like I was missing anything from the song. Of course, the ANC does make music feel a bit cramped because it tends to limit the sound stage, but that’s the trade off you make to avoid the whir of 747 jet engines when you’re trying to hear a movie on your laptop. 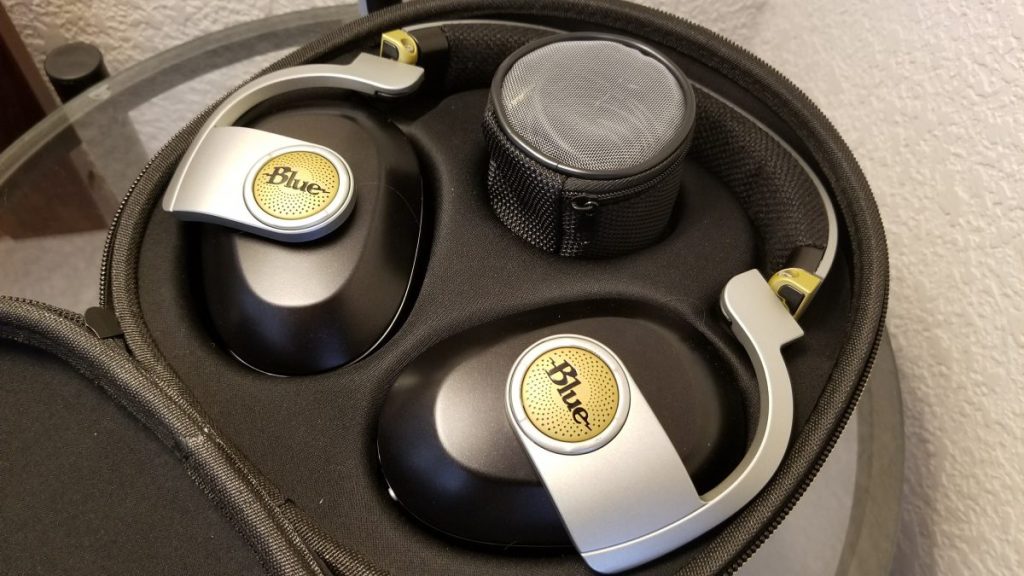 Above: Blue’s new Satellite gaming headset in its carrying case.

The Satellite’s performance as a gaming headset is functional. It’s impressive sound capabilities carry over to chaotic battles and 3D audio environments. I appreciate what the amplifier does for games with dynamic audio like PlayerUnknown’s Battlegrounds. That shooter can go from quiet, outdoor ambiance to a roaring plane flying overhead, and the Satellite can accurately reproduce that entire range. It also has a microphone for communicating built into one of the earphones. I like that the mic doesn’t hang out in front of your mouth, but your voice will sound compressed and garbled — which is standard for wireless headsets.

You can hear an example of what the Blue Satellite’s wireless mic sounds like compared to other headsets in the playlist below:

The Satellite has an expensive, professional appearance. From a distance, you don’t notice that it overuses plastic materials. Instead, you see the luxurious-looking over-ear cups and the silver-painted chassis with gold accents.

The headset controls also keep a low-profile. A ring that surrounds another gold accent on the outside of the ear cup has three buttons each. All of this comes together to make a headset that looks sleek and well designed from a visual standpoint.

Blue used a lot of plastic to make the Satellite, and that has some drawbacks that we’ll get into, but the company did nail the comfort. The Satellite is lightweight but also fits snug onto the head. That enables the headset to fit right into that counterintuitive space where you can forget you’re wearing it because it feels substantial.

Take running. I used the Blue on my treadmill, and I could always feel it gripping my head, which meant I always knew it was holding in place. It wasn’t bouncing around and grabbing my attention because it needed adjustment or because it was causing some other annoyance.

And even in normal use at a desk, the Satellite’s grip is never painful. It’s just a firm, confident hold that will free you up to focus on work or your game.

The Satellite’s plastic does feel cheap. It’s startling to pick up the headset, knowing it costs $400, and to get the sensation that you’re holding some kind of brittle toy. Now, the cheapness of the plastic vanishes when you get the Satellite on your head, and it definitely keeps the product lightweight. But I think a little aluminum or even sturdier plastics could have gone a long way toward making you feel more like you’re getting what you pay for.

On-ear buttons that are difficult to use

By far my biggest problem with the Satellite is its controls. I mentioned that each ear cup has three on the outside, and they are arranged on a ring. And while that looks nice visually, it’s really hard to find them while in use. The buttons just don’t standout, and it takes me forever to remember which one does which.

This problem is exacerbated because the labels on my buttons rubbed off after a week of use. That’s right — the paint on this $400 headset didn’t last a week. I generally remember which button does what, but I’ll occasionally turn ANC off and on ten times while I’m trying to lower the volume. It’s a bummer.

You definitely get the sense that Blue put its development money into the Satellite’s internals and its visual design. The usability takes some getting used to, and the plastic body and the paint rubbing off the buttons makes the device feel cheaper.

But I still want to recommend the Satellite because those issues disappear along with the outside world when you power on the amp and the noise-cancellation. If you are trying to focus completely on your game in a noisy environment, this headset will give you isolation and great sound. Then you can take it with you and use it wirelessly on anything that supports Bluetooth, and it’s extremely comfortable regardless of the activity. That’s the combination I want in a headset, and I’ll put up with the annoying buttons to get it.

Blue provided GamesBeat with a sample unit for the purposes of this review.