This holiday gaming season is overflowing with blockbuster shooter games, and that is potentially limiting the appeal of one of that genre’s perennial hits … at least on PC.

Over the launch weekend for Call of Duty: Infinite Warfare, the sci-fi space-battling adventure’s (read our review) player base dropped 76 percent compared to the launch weekend for 2015’s Call of Duty: Black Ops III, according to data-intelligence site Githyp. The new game only generated a peak player count of 15,280 people on Steam through Sunday where Black Ops III hit more than 60,000 simultaneous players through the same weekend last year. Infinite Warfare didn’t even do enough to break into Steam’s top-25 most-played games. Activision launched Infinite Warfare for PlayStation 4, Xbox One, and PC on November 4, which made it the last of a crop of shooters to debut over the last few weeks from competing publishers like Microsoft and Electronic Arts.

“While sales have been on a constant decline year after year, Call of Duty: Black Ops III did surprisingly well last year ranking as high as No. 4 on Steam with a peak of 63,681 players during its big launch weekend,” Githyp analyst Paul Curtin wrote in a blog post.

Infinite Warfare’s peak simultaneous players so far today on the popular Steam PC-gaming service has topped out at 11,000, according to the Steam Store stats. That puts it just behind the Ubisoft SWAT simulator Rainbow Six: Siege and 2013 bank-heist shooter Payday 2, which are at 12,000 and 15,500 peak concurrent players today, respectively.  Of course, some people specifically purchased Infinite Warfare to play Call of Duty: Modern Warfare Remastered — an updated version of the 2007 game — but that only adds another 4,546 players to the Infinite Warfare collective. 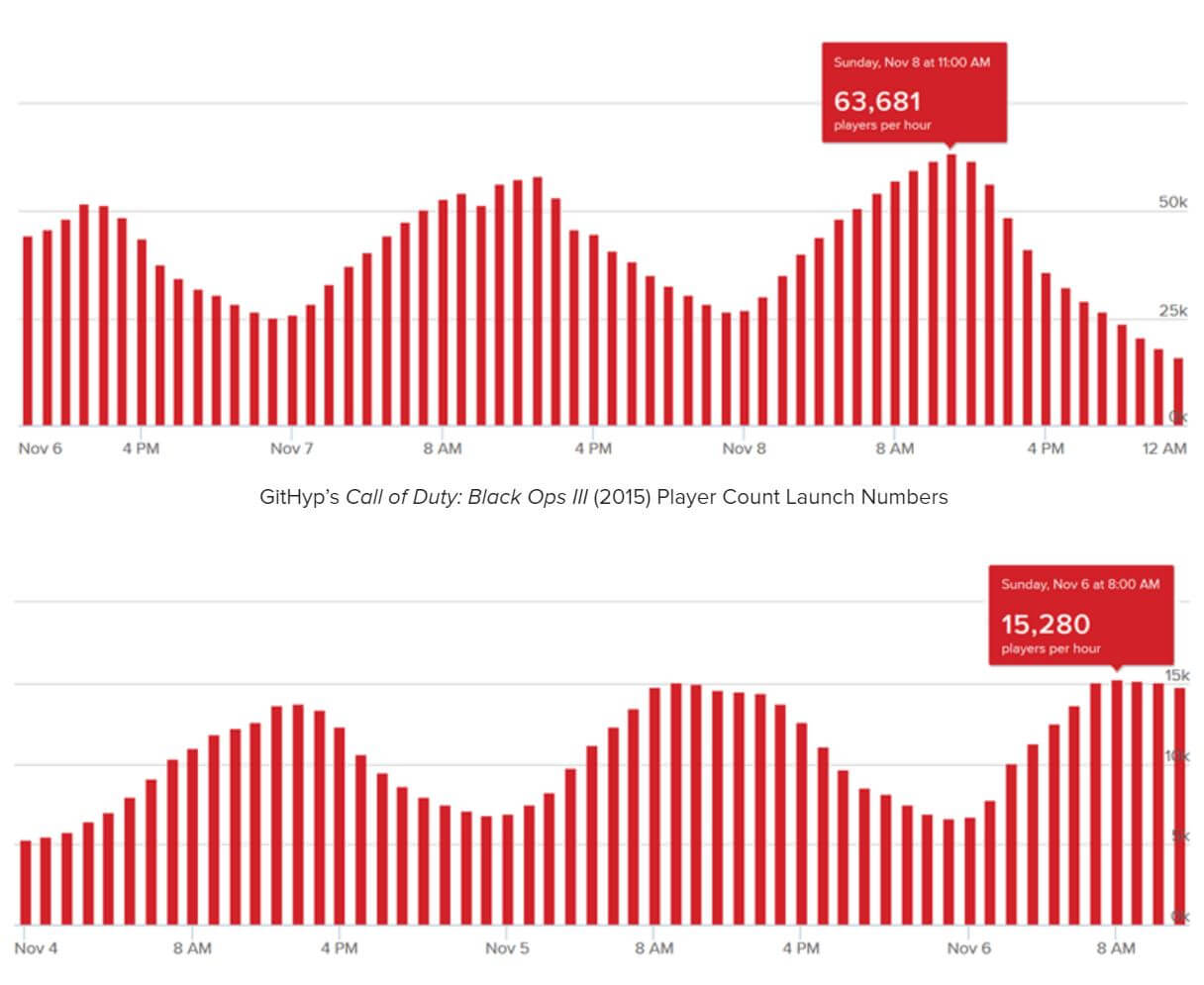 Livestream viewer counts have also taken a dive, and that includes the PC version of the game as well as the console.

For the last decade, Call of Duty has finished the year as one of the top-selling games in the world. It has taken the No. 1 spot on the best-selling retail games in the United States every year since 2007 except for when Grand Theft Auto V debuted in 2013. Infinite Warfare, however, is seemingly struggling to bring forth any of that momentum, and it’s not just because of the U.S. presidential election.

Of course, Infinite Warfare isn’t just a PC game — Call of Duty is primarily a console franchise. For proof of that, just look at how publisher Activision promotes it with esports. The company doesn’t bring together the best PC Call of Duty players for its competitive-gaming events. Instead, teams take each other on using DualShock 4 gamepads and PlayStation 4 systems.

Regardless, Call of Duty’s year-over-year drop in Twitch viewership and peak concurrent players still indicates that players are choosing other games instead. And 2016 has provided a deluge of excellent shooters like Titanfall 2, Battlefield 1, and Gears of War 4 — along with existing hits like Overwatch and Counter-Strike: Global Offensive. With that much choice, it is a tougher landscape than ever for one game to dominate all others.