Sledgehammer Games showed off the latest trailer for multiplayer combat in Call of Duty: WWII. And it will give a new meaning to “boots on the ground,” as it will involve land, air, and sea combat.

Sony revealed the new trailer for the game at its press event at the Electronic Entertainment Expo (E3) game trade show in Los Angeles. In the trailer, there is nonstop fighting. American soldiers battle the Third Reich in bunkers, on city streets, and even on the decks of a battleship. Paratroopers drop from above, and German artillery shoots American bombers out of the sky.

Activision also said that the new Divisions feature “redefines how players invest in their multiplayer career, giving them the chance to choose from five divisions, each with their own specialized training and weapons skills.” In War Mode, players must work as a team and fight for control through multiple strategic objectives.

Sledgehammer Games founders Glen Schofield and Michael Condrey said at our recent GamesBeat Summit event that they try to put the “Sledgehammer stamp” on a Call of Duty game that reflects their own creativity. The studio’s creative process includes consulting with historian Marty Morgan and traveling the battlefields of Europe, from Normandy to the Rhine. Its designers sat in the same fox holes that soldiers occupied in World War II. They froze in the Hürtgen Forest in Germany and felt what it must have been like to be soldiers fighting in a hellish environment. They want to convey that in their game in the same way that Steven Spielberg did with Saving Private Ryan for an earlier generation. 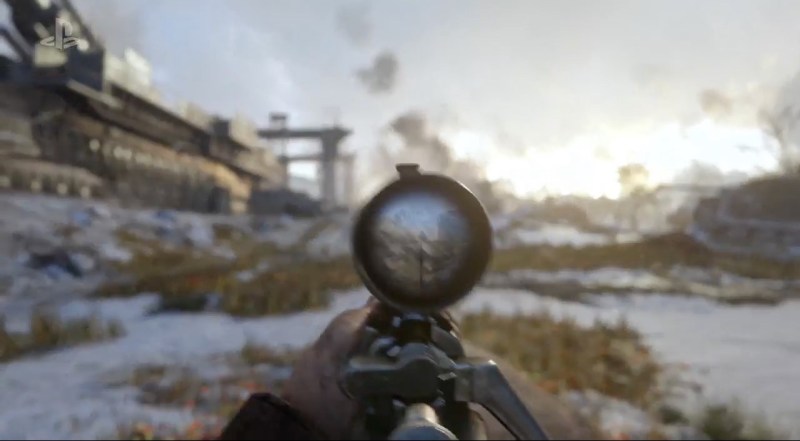 Above: Sniper in Call of Duty: WWII.

Condrey also said that the presence of diverse soldiers — including female French Resistance fighters — reflects not only what really happened in the history but also a modern sensibility and awareness that the audience of gamers is more diverse than ever.