When I met Victor Kislyi at the recent Game Developers Conference in San Francisco, he was happy and tired. The CEO of Wargaming was happy because, after seven-plus years, the team finally moved the free-to-play PC game World of Tanks to its 1.0 edition.

I enjoy kidding Kislyi about why it takes so many people — 4,500 employees — and so many years to get to version 1.0. But Kislyi said the team is passionate about getting to perfection. The tank team battle game — which Will Wright once called a first-person shooter for old people — now takes place in full high-definition, and it has destructible environments. Wargaming also launched a World of Tanks augmented reality experience.

Of course, now that means it’s time to get World of Warships into ship-shape next. Fortunately, Kislyi said, the teams at Wargaming will be able to share what they’ve learned.

As for why so many tens of millions of people are still playing the game, he said, “I compare World of Tanks to football, European football, or any big sport. The rules are relatively simple. You hit the ball into the goal and you don’t touch it with your hands. A bunch of kids can play it on the beach in Rio de Janeiro. You can play it in the backyard. You can kick a ball around with your son for practice. And it goes all the way from there to Manchester United, the World Cup, whatever, this whole show business bonanza around it and computer game licenses. That’s all football, if you think about it. You, as a human, can choose any level of engagement. I think the same is true of World of Tanks. You can just blow stuff up and have fun. That’s it. That’s what I’m doing.” 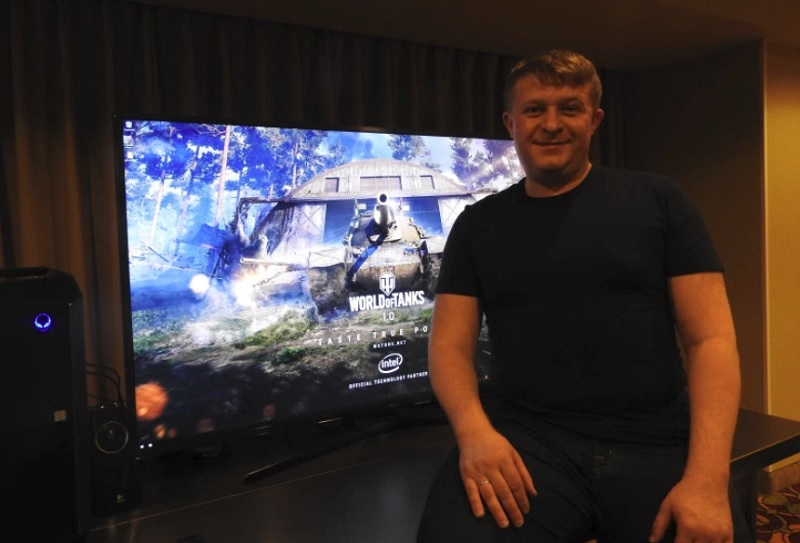 Above: Victor Kislyi is CEO of Wargaming.

GamesBeat: What’s interesting to you at GDC this year?

Victor Kislyi: Obviously, these days, we’re all about 1.0. We’ve been working on this, not showing it to anyone, for two, two and a half years. The short story would be—the old Big World client technology goes into history. We have new technology. It took a little bit longer, because we have to redo all the content for World of Tanks — maps, tanks, explosions, effects — to put the whole game back together in the new reality.

We revamped into full HD everything. I’m in a position to say we can be on the same level with Frostbite for Battlefield. If you think about it, World of Tanks has 30, 40 maps, two or three square kilometers each. In total it’s 100 square kilometers of highly detailed everything — butterflies flying, flowers, buildings, German cities, Russian steppe, Ukrainian village, jungles, glaciers. You’ve seen the maps. Now it looks like Star Wars, Naboo, Tatooine, and now you can play it.

The game, of course, stays the same. Everything you had before is there. It launches in the U.S. tonight. The doors open and you update. We did this auto-updater in the background, for everyone who didn’t remove the check box.

Kislyi: Russia was a day before. It was about to sleep off the jet lag and then I got a message. “Things are good.” What do you mean, things are good? “We launched and it works.” Oh my God, no sleep. I got a good ping playing from America, on Russian servers. It was a 140 ping, and it was enjoyable.

GamesBeat: It didn’t look that bad before.

Kislyi: Well, we have some comparisons to answer that. You can see this map here, reworked over the last five years. It’s a lot of technology, and it’s interactive, destructible. The shock waves, the explosions, the craters. It’s a lot of work. Now the maps are endless. It used to be we had a kind of wall surrounding it, but now everything outside the play area is really beautiful too.

If you move through the water in a tank, it makes those waves and splashes. The tank will get wet, and that wetness goes away as it dries. The same goes for snow. If you’re in a snowy map and doing these parking maneuvers, you’ll get covered with snow. Then the snow goes away gradually. It’s very realistic now, for a triple-A game.

This really unties the hands of our team now. They’ve been working for two years, and nobody’s seen the results of that work. It’s only today, when the doors open. Now the developers are free to go on to new maps, new modes, new effects. The old engine is dead, which is going to be very good for the game.

GamesBeat: Did users request this? The same game, but with Frostbite?

Kislyi: Many of our users have been comparing it with Frostbite and everything else. The best part of it is that it doesn’t increase your system requirements. The whole point of the new technology—it’s very new rendering technology, done within Wargaming. This is our thing. We have to operate in Russia and in China. Your old computer, if it runs World of Tanks now, before today, it will run World of Tanks in no worse quality tomorrow, and in many cases better quality.

PC gaming is back. Let’s put it like that. People buy Dells and Razers and Alienwares and spend $2,000 on a rig to play extremely high-fidelity games. Now World of Tanks is one of those games. It’s in the top tier. Henry Ford once said, “If I asked my customers what they wanted, I would have made a faster horse.” Sometimes that’s the whole point of innovation. We didn’t get many requests for a touch screen version either. As a company you have to do things that aren’t necessarily the result of user polls. You just do it, and then everyone says, “Wow.” We’ve been running for two days in Russia, which is a very critical region for gaming. They love it. The media loves it, but most important, the players love it.

Kislyi: Four thousand-five hundred. The whole World of Tanks team, if you combine publishing and development, that’s 800-ish, give or take. Some people are shared, especially technology people. Specifically for this update, there were maybe 200, 300 people, working busy days and nights.

It’s time to revamp Wargaming. We used to have a so-called functional structure, where global development, global publishing, finance, and so on—development and publishing would have inside themselves their own silos resembling products. Now, since last September-ish, we have a product structure. It sounds banal, like a paper exercise, but it has implications inside Wargaming. Now products, and obviously World of Tanks is a product, consolidate all their development and publishing power underneath a product.

World of Tanks PC is king. The heads of this product, the product group, the top five or six people, they decide what needs to be done, and when, for the sake of this product. Their financial incentives are very much aligned with the success of the product. Their bonuses, give or take, are 10 percent from the EBITDA of the product. Our finance department is able to attribute all the expenses, and obviously revenue is easy. Money from Tanks is money from Tanks. Expenses are everything, business trips, paperclips, whatever it needs to be. That’s automatically attributed through our SAP system. It’s a bit bulky, but it works. It’s very robust. 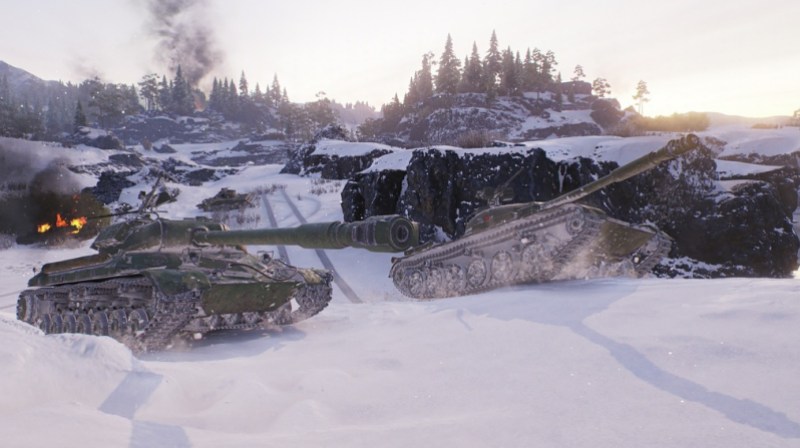 GamesBeat: Why did you need to reorganize?

Kislyi: When World of Tanks was the only game, there were no doubts about this. We were entrepreneurial. That was what drove innovation. We knew that. When we became a big company, that entrepreneurial spirit goes away slightly. Instead we have bureaucracy, vice presidents, boards, all that stuff. There are books about this, right?

Ironically, I wouldn’t have believed this would happen to me, to my company. But if you don’t prevent it proactively, it happens. You end up with layers of VPs and SVPs and politics-shmolitics and all that stuff. We had it. I have to admit it. We had internal wars, in effect. One little thing takes months to happen. People care less about the results and more about their career growth. We weren’t that bad. We weren’t the worst company in the world. But when you have multiple products — Warships, Blitz, console — people have to be incentivized to care about the players of their products.

At this point we’ve had 150 million people try this game. Dozens of millions are playing today. Obviously we hope that with 1.0, it’s a good reason for some of the people who’ve left the game to come back and see what we’ve done. We have to keep caring about those players for the next decade or two or three. We’ll soon celebrate ten years since the idea. This year it’ll be eight years since launch. The game isn’t falling off. There’s no plateau. It’s growing. But not on its own. You have to do these things to keep growing.

GamesBeat: Why did you take eight years to call this 1.0? Is that symbolic in some way?

Kislyi: If you looked in the client yesterday, it would have said 0.9 something. That wasn’t just formalism. From time to time we had this discussion. Why don’t we call it 1.0? Believe it or not, at Wargaming we do have an understanding of perfection. In Japanese they say kaizen. I tend to think, or I hope, that people view me as a perfectionist in some things, especially when it comes to games. We have many, many guys and girls who want things to be perfect.

With this one, we run extensive tests on test servers. It works. It doesn’t crash. It runs on very old machines. It was a good time. Only when we realized that it’s that cool, and it works, we said, “You know what? Maybe—“

Of course, 1.0 is kind of a marketing trick, if you think about it. We called it Rubicon a couple of years ago and that didn’t work out very well for us. This time, we didn’t jump the gun. First, we made it. We made it sure it works. It runs on low-spec machines. Then we said, “Let’s do our marketing with this one dot zero.” That was the easiest part, trust me.