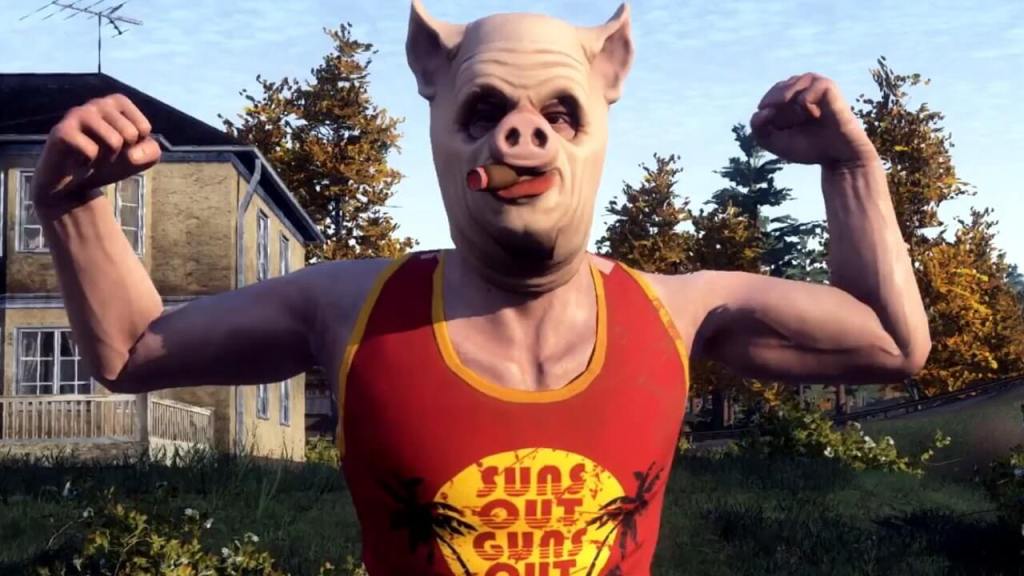 King of the Kill’s real problem, however, is one of potential. Even once the game exits Early Access and gets a couple dozen more updates, it will probably have the same core action-packed loop. As broken as PUBG is, it has already surpassed the H1Z1 spinoff, and it still has a lot of room to grow and improve.

Daybreak has made some updates to King of the Kill to make it play more like PUBG. The studio made weapons more realistic, and it made changes to get players out of the looting phase and into the fight earlier. But that’s just spackling on a foundation that is much more arcadey and forgiving than PUBG.

In early September, Epic Games revealed that it was adding a new mode to its building-defense game Fortnite called Battle Royale. This add-on comes with Fortnite, and it lifts most of its concept directly from PlayerUnknown’s Battlegrounds. It is so close to PUBG, that Bluehole has even said it is considering taking action against the game.

But until PlayerUnknown himself shows up at Epic to delete their servers, Fortnite: Battle Royale is still available. And the experience of playing it is relatively solid. Like H1Z1 and PUBG, it has dozens of players landing on an island to find weapons and to outlast everyone else. But it sticks closest to Bluehole’s game. For example, you ride on an aerial vehicle until you choose to drop (where H1Z1 randomly drops you from the sky), and Fortnite has a 100-player limit.

That doesn’t mean that Battle Royale doesn’t have some key differences. The biggest change is that you can use the core Fortnite game’s structural crafting tools. At any time, as long as you have the resources, you can build shacks, towers, or even stairs. I’ve seen multiple people building stairs in front of themselves as they run to unreachable mountain tops. Building also means you can place a shack in the middle of a field where no natural cover exists. H1Z1 or PUBG don’t care if you can’t find cover — that’s your problem.

Fortnite also puts a lot more emphasis on finding rare loot. You can find a shotgun or rifle rather easily, but you’ll always want to keep looking for a more powerful shotgun and rifle.

But despite those changes, most matches will end up feeling a lot like PUBG. You’ll drop from the flying school bus, look for loot, try to get geared up, and then head to the safe zone. Along the way, you’ll try to kill anyone you come across and hope that you can get a strong position to take on the last remaining players.

Fortnite: Battle Royale is even more unfinished than PUBG. It doesn’t have vehicles yet, and Epic hasn’t introduced squads yet either (squads are coming with the free-to-play release on September 26) But its biggest issue isn’t what’s missing, it’s that what’s there isn’t as enticing as the competition.

Fortnite’s physics are a lot more forgiving and arcadey, and this fits with its animated aesthetic — but it makes your character and weapon feel like they exist in two different realities. Your hero can do a massive hop off of a bounce pad, but your rifle still has somewhat realistic bullet drop.

And the idea of bringing structural crafting into a Battle Royale game is fun, but it doesn’t really work in Fortnite. Other than using the stairs tool, no one really builds early in the match because you don’t want to waste your resources only to have to move when the safe zone forces you to. And in the final circle, if you’re building, someone else is probably going to kill you before you can get your gun out.

Finally, I don’t play the main Fortnite mode, but Janine Hawkins over at Waypoint points out how this isn’t great for people who do. It is another time-consuming game type where the building doesn’t matter as much and the characters don’t carry any of their special abilities over from the PVE mode

As people play the game more, the building could make a bigger difference as the best players figure out how to use it. Even in that case, however, Fortnite may give players more tools to survive, but I still don’t think that is as interesting as the limitations PUBG forces upon its players.

PlayerUnknown’s Battlegrounds is still the game to get. It is special even if it is broke in certain ways. Every match is a learning experience, and you can apply each death’s lesson to your next round by hitting that play button one more time. It’s also found the magic in putting limitations on players, and that has unlocked the potential the concept in a way the other games have not.

You may also want to get into Battlegrounds right now because this is still its moment in time. It’s like playing Quake or Super Mario Bros. when they first came out, and you’ll probably share memories from this time with other gaming fans for the rest of your life. It’s that big and important.

Fortnite and H1Z1 aren’t bad games, and I think some people might find those games more appealing for specific reasons. Fortnite is more visually alluring and H1Z1 has a faster pace and focus on action.

But it’s PUBG that I would tell anyone who asks me to get because I think once you try it, you’ll see why everyone is so nuts for it.

Correction: I originally wrote that Fortnite is going free-to-play in 2018 and getting squads at that time. It is actually going free-to-play on September 26, and Epic is adding squad matches at the same time. I apologize for the error.