As took my final breaths, I wondered why my son hated me so. I provided the best education, sending him to the imperial court for tutelage. I found him a spouse that opened doors for both of us. I doubled the size of the realm he would inherit. And yet, he killed me in his thirst for power.

Crusader Kings III isn’t a grand strategy game. It’s really a role-playing game in which you play the sovereign of a realm. But where its genius lies isn’t in just playing one ruler — when one dies, you take the mantle of your heir. This doesn’t just keep the game going; it allows you to continue role-playing your realm, but from a different perspective.

So when the son deposed my first ruler, I started playing as him … until my uncle then led a revolt of the realm’s most powerful vassals against my new character. And this continues until you either play yourself into a corner and quit, hit the end date (you start in 1060 AD and play until 1453), or start a new game. It comes to PC on September 1 from Paradox Interactive and Paradox Development Studio. And like most Paradox games, I expect Crusader Kings III to get even better with age.

But it’s damn good already. I started by telling you about how I felt after 43.3 hours over a few weeks, and after another 10 hours, I’ve decided that this is the best game Paradox has ever made.

It’s an RPG, not a strategy game

For a long time, I struggled with Crusader Kings II. I would sit there and start plotting out my strategy, approaching it as I would a Civilization or Europa Universalis (another Paradox staple). But a few years ago, I stumbled upon a realization many already knew: You’re playing as the rulers, not the realm. It’s as much about them as it is about growing duchy or kingdom. Once I realized this, I found Crusader Kings not only easier to play but also more enjoyable as well.

For my current ruler, the King of Brittany, I started out with two goals: to become a learned, well-liked man; and to set up my own kingdom. I focused on the skills in the diplomatic and learning tress. I got lucky — he assumed rulership in his late teens, and he’s still on the throne at 75. He’s found numerous tomes, some mystical in nature, and he’s won renown for his knowledge of religion and many other topics. Whenever I ask another ruler if I can teach one of their children as a ward, they almost always accept. 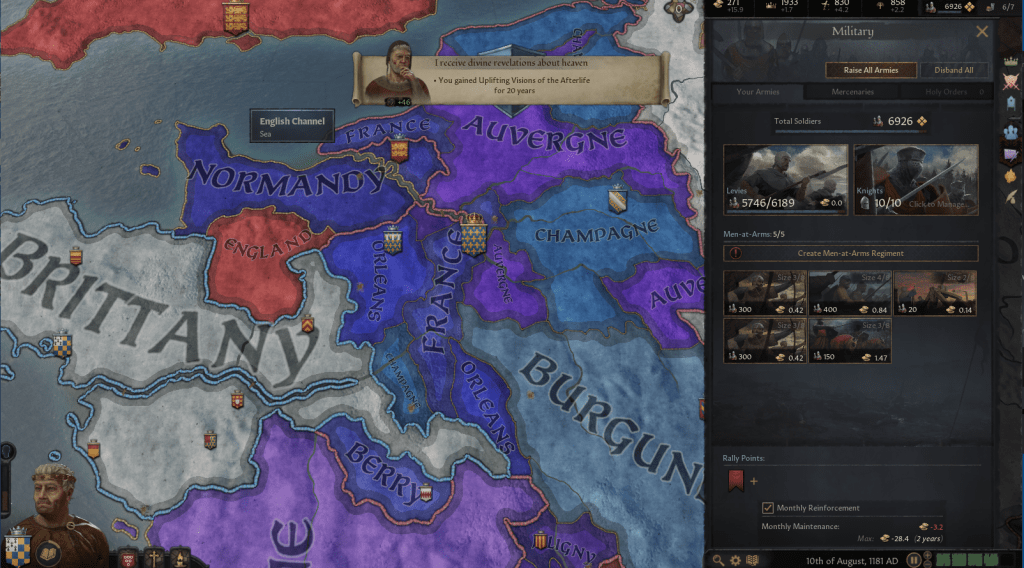 Above: My book-learning leads to some deep thoughts.

But somehow, he also became an infamous reveler. He got invited to many feasts, and hosted numerous fetes as well. And he became fat. Very fat, gaining the obese trait in his late-60s.

I found it funny when I decided to lose weight after gaining the obese trait. Shortly after making this decision, I got ill, then was on death’s door. At 71, I ordered my court physician to do no more than the minimum to keep me alive, and then … I survived. After my recovery, I put an end to the losing weight nonsense and hosted a feast — the next day, I woke up better rested and healthier than ever before.

Obviously, the lesson here is to continue to be a partier and a glutton in my waning years.

My favorite part is playing matchmaker, marrying off my children, grandchildren, courtiers, and vassals to other important folk in nearby realms. I do so with an eye on alliances — will this marriage result in an ally for an upcoming war? I look not just at how it benefits my line but also my military. It’s a hoot to have a half-dozen allies, all with armies stronger than yours, and then to start a war with a neighbor with a stronger military but weaker allies (or no friends!), overwhelming them and winning your claim despite putting fewer of your levies and knights at-risk.

So instead of thinking about how you want your realm to grow, think more about how you want to rule. Think about your ruler as your character; once you do so, the complex web of relationships among family, vassals, courtiers, your liege, and other rulers makes more sense.

Better tips, but it needs more

Crusader Kings II came out in 2012, and Paradox has supported it with patches, updates, and 15 pieces of downloadable content (expansions, packs, etc.). It remains quite playable today.

I expect Crusader Kings III to get the same level of support, if not more. And at launch, it does a passable job of explaining its complex mechanics: ruling vassals, choosing marriages, making claims on titles and lands, and so on. I wish it did more to show you how diplomacy works — how to build alliances and make friends without going through multiple menus and lumps to figure it out yourself. 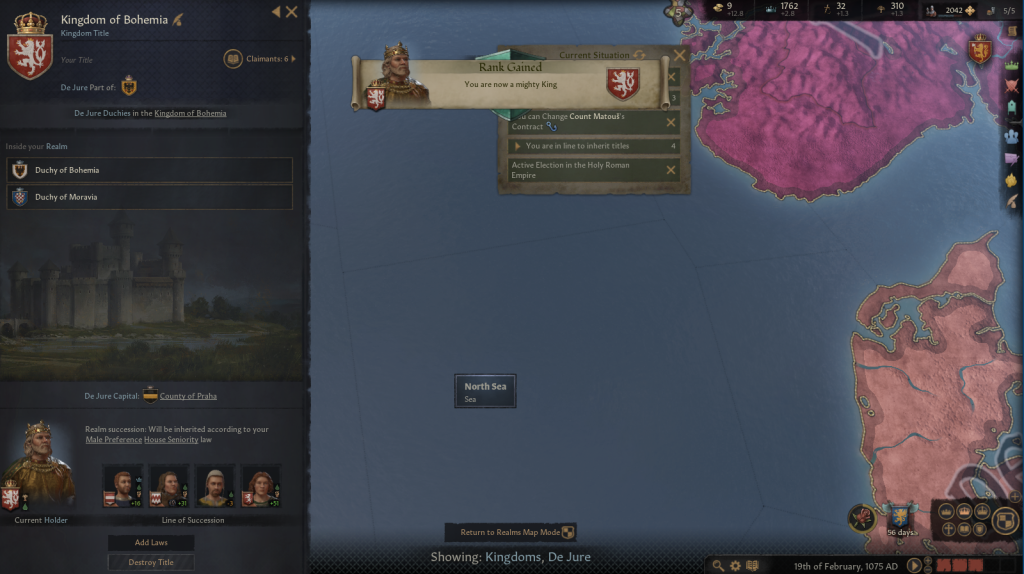 Above: The King and I.

And I crave a small tutorial scenario on how to set yourself up as a king, winning your independence from your liege.

But Paradox could end up adding more tutorials down the line, or it could add mechanics that make Crusader Kings III’s more obscure workings more transparent. And it certainly will post dev dairies and work with streamers to show folks the ropes. As always with this publisher’s works, I’m excited to see how this game grows in the coming years.

It takes some time to gronk that while some of your decisions have immediate or short-term consequences, a number of choices result in things that either happen years later or last for a decade or two. Let’s take executions. I learned a vassal (an uncle) was plotting my murder, so I gave him the axe. This hurt my standing with my court and my family for over a decade. They were afraid of me, but they also worried I could become a tyrant. Up to that time, I hadn’t done anything tyrannical, other than keeping a prisoner locked up for three decades (another plotting vassal, and they deserved it! I wanted them to rot until they died under house arrest).

And this is important: Every decision you make should have some long-term goal to it. Offering a ward to a powerful ruler, prince, or duke? Make sure that improvement in opinion you get from that person can help you with an alliance, a marriage, or another transaction down the road. Expanding your kingdom? Make sure that new county or duchy pays off with levies for your army, taxes for your coffers, and titles that make you matter more to your friends and rivals.

Early on, I made friends with the prince of England. He was in line to inherit the realm. And he did. We married our firstborn to each other. And it proved to be a fruitful alliance. He helped me take over several counties, and his support was key to my early expansion. Meanwhile, I helped him take over his western turf and bite off a piece of Scotland. But setting this up took almost 20 years.

And it was worth it.

Where do I go from here? 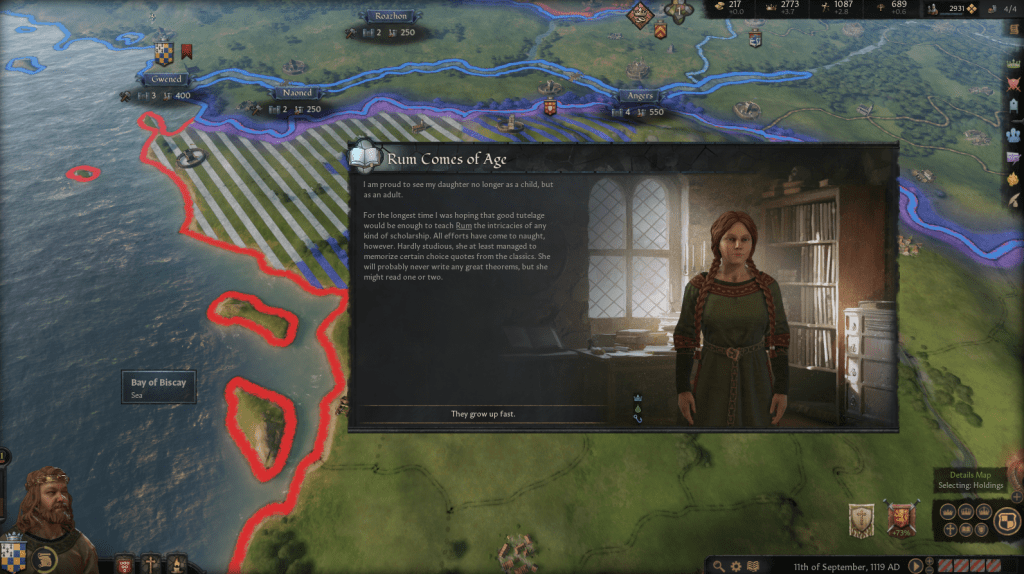 Above: Crusader Kings III’s first name suggestion for my daughter was Rum. I couldn’t resist.

I’ve played two ruling dynasties so far. I ran the first into the ground, as coups and murders tore the realm apart. In my current run, I’m on my second ruler, a wise man who’s taken Brittany from a tiny realm in the corner of France, expanded it threefold, and waged a successful war for independence, all while becoming a learned, trusted person among his peers.

I do have one minor complaint about running your realm: I wish the powerful vassals demanding council positions had better stats. Every time one nagged me about it, they always had lower scores in diplomacy, stewardship, and so on, than those on my council. I had to decide if it was worth hurting the realm to make them happy. Maybe that run just had some bad luck. But really, if all your stats are 10 or less, vassal, just shut up, collect your taxes, and enjoy your title. Leave the ruling of the realm to the adults!

At this point, I could score this game … but Crusader Kings III, like all of Paradox’s releases, is like my Brittany. It takes time to figure out its web of mechanics and systems, just as it takes time to make and tune them. The development team learns, and Crusader Kings grows, becoming a different (and oftentimes better) game in the process.

In my review-in-progress, I said if I were to score it now, I’d give it a 5/5. More than a month later, I’m ready to do so. This is the best Crusader Kings release yet — and it’s Paradox’s best game release ever.

Crusader Kings III launches September 1 for PC. Paradox Interactive provided GamesBeat with a Steam code for the purposes of this review.