Nearly two years into the pandemic, most consumers still aren’t comfortable going out for entertainment. And as a result, 84% are spending more time with online entertainment, and many younger consumers are playing games.

The survey of 1,102 U.S. consumers found 82% say they are concerned about COVID-19 variants, and that’s likely keeping people indoors and online.

Boomers and Gen X still rank “watching TV shows or movies at home” as their favorite entertainment activity. But Gen Z consumers rank “playing video games” as their preferred form of entertainment. And 65% of respondents are frequent gamers, playing at least once a week; on average, these frequent gamers play for around 12 hours a week.

In addition, 65% of consumers are engaging with at least one social media service several times a day.

Above: Gen Z prefers gaming over other entertainment.

Gaming and game-related content, such as live streams and video, continue to pose a threat to streaming video companies for consumers’ entertainment time, Deloitte said. And, for many gamers, these activities have become much more social.

About 65% of respondents are frequent gamers, playing at least once a week across devices like smartphones, consoles, tablets, portable gaming devices and computers. On average, frequent gamers play for around 12 hours a week. Gen Zs and millennials play closer to 13 or 14 hours weekly.

Connecting with others is an important part of gaming. More than half of frequent or occasional gamers say “having positive interactions with others” is very or somewhat important to their overall gaming experience. Among frequent gamers, 45% are watching others stream their gameplay; 38% are streaming their own gameplay; and 49% are watching videos about gaming tips, cheats and tutorials on a monthly basis.

Among frequent gamers, about 40% of Gen Zs and millennials play against other people online every day, and almost as many millennials (37%) are meeting up online to play with teammates daily. Forty-three percent (43%) of frequent gamers are purchasing skins, like virtual clothing, tattoos and hairstyles to represent themselves to other gamers, as well as gestures and dance moves known as “emotes,” to personalize their game characters monthly. 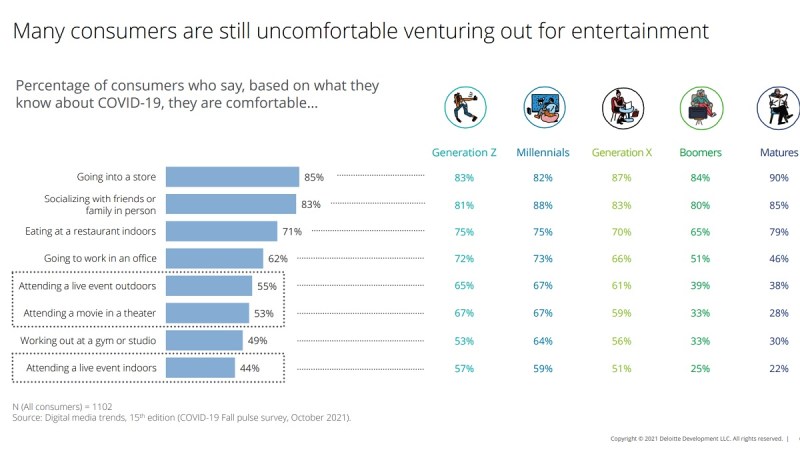 Above: People are uncomfortable venturing out for entertainment.

Deloitte said “churn and return” behavior is most common with younger generations: Almost half of millennials (47%) and 34% of Gen Z cancelled and then resubscribed to the same streaming video service later that same year. The top reason consumers cancelled a paid streaming video on demand (SVOD) service was due to the high cost followed by the fact they finished the show they signed up to watch. 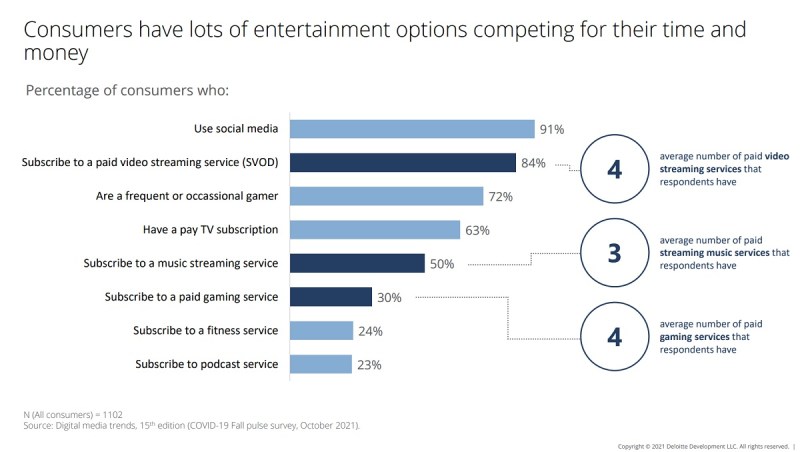 Above: Entertainment competition is tough.

The continued uncertainty of the pandemic, and the spread of the Delta variant through the summer months kept consumers close to their households and plugged into online experiences, Deloitte said.

At the start of 2021, Deloitte launched its annual survey, which found that consumers had more time for home entertainment while streaming video providers were competing for subscribers against myriad entertainment options. In August of 2021, Deloitte fielded another survey of U.S. consumers, which revealed that changes shaped by the pandemic have continued and it’s becoming clear a return to the “old normal” is not imminent.

For streaming video providers, keeping subscribers is harder than ever as people — especially younger generations — are managing costs by adopting ad-supported options, looking for discounts and bundles, and moving on and off services to satisfy their content needs. But COVID-19 could be ushering in a permanent shift in entertainment, where it’s not just about streaming, or the number of subscribers, but also importantly about how platform providers are responding to subscriber churn by providing enhanced experiences and the ability to connect with others on their platforms.

“We’re seeing an important shift in what consumers are paying attention to and how they are choosing to engage and be entertained,” said Kevin Westcott, vice chairman of Deloitte, in a statement. “While streaming video will continue to gain momentum, especially with leading services now pursuing global markets, these companies will also need to address churn and retention among diverse segments in different markets, and shift from merely measuring subscribers to understanding how to unlock the lifetime value within their customer bases. It will serve them well in the future to develop growth strategies that include both social video and social gaming, whether through partnerships, acquisitions, or simply establishing a really effective social media department.” 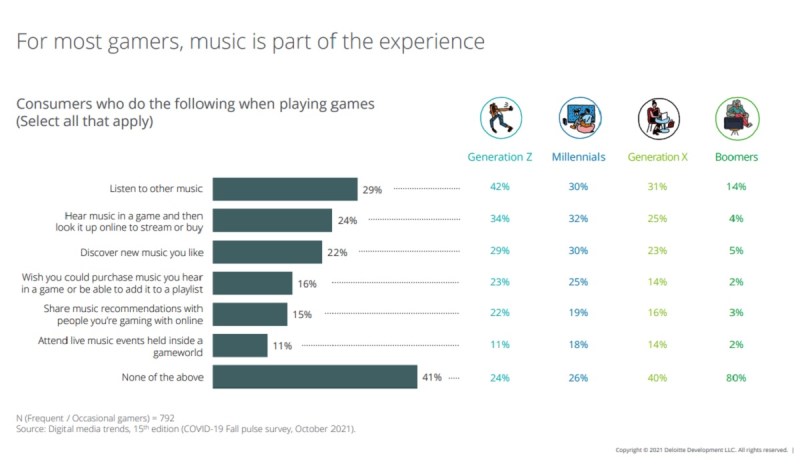 Above: Games and music go together.

Deloitte found that, compared to six months ago, consumers across generations have actually been spending more time watching TV and browsing the internet as they seek indoor entertainment options and avoid out-of-home experiences.

Over 80% of U.S. respondents remain concerned about COVID-19 variants. When asked to describe their recent behavior, 84% of respondents say they are spending more time on online entertainment activities and less on in-person entertainment outside of the home.

About half of consumers (48%) say they spend more time on online entertainment versus six months ago. Boomers and Gen X still rank watching TV shows or movies at home as their favorite entertainment activity. Gen Z, meanwhile, still rank playing video games as their preferred form of entertainment.

Everyone younger than Boomers, especially Gen Zs and millennials, have been listening to music more than they were six months ago.

More premium and ad-supported services have launched, giving U.S. consumers additional options for watching new original content, and accessing a broad content library. The survey revealed that consumers are getting better at developing strategies to access this content while keeping their costs low.

Eighty-four percent of people now pay for a SVOD service; the average household has four subscriptions — largely unchanged during the past year. The churn rate — the number of people who have cancelled, or both added and cancelled, a paid SVOD service — has remained stable at about 38%, although it varies from service to service.

Many streaming video subscribers say they actively manage costs in some way, either by looking for deals or promotions, bundles, using friends’ or family members’ accounts, and other strategies. 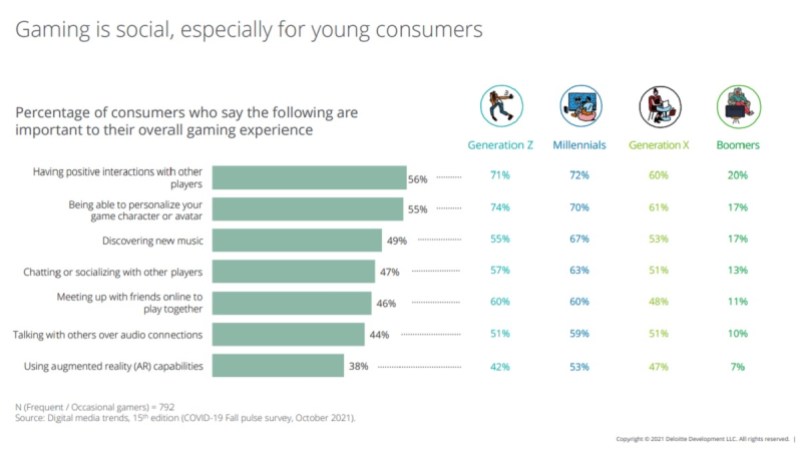 Above: Buying on social media is common.

The use of social media and online services is widespread among U.S. consumers and is a daily activity for many. Social apps are free and primarily mobile, reaching users wherever they are located. People are watching videos on social media, especially short videos made by average users and influencers. And with many consumers using these services, media and entertainment options are migrating onto them, and social commerce is booming.

The top reasons for using social media are staying connected to friends and family (51%) and staying up to date on news and current events (31%). Discovering new content also ranked highly: 21% use social media to discover new video content, and 16% use it to discover new music.

Roughly 4 in 10 U.S. respondents say that they have seen a product on social media and gone to the retailer’s website to buy it or clicked on an advertisement that led to a purchase. And 31% of respondents have made a purchase directly on a social media service. Younger consumers are more likely to find recommendations from influencers important to their purchasing decisions.