Video game software and hardware together could be a $165-$170 billion range in 2018 (if mobile outperforms again), and it could reach between $230 and $235 billion by 2022 if strong performance continues. That might make games software/hardware bigger in five years than 150 countries’ individual GDPs today (somewhere between Vietnam and Finland). Games software alone could drive around three-quarters of total market revenue in 5 years, with hardware taking the rest. 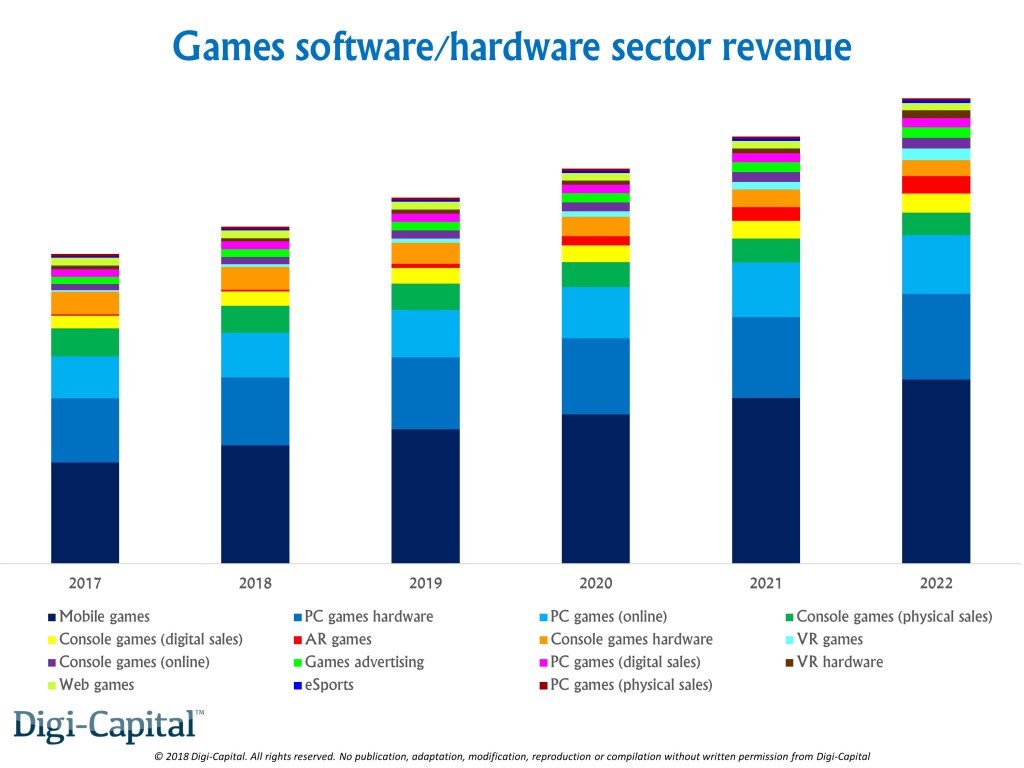 Digi-Capital’s new Games Report Q1 2018 details how the three big sectors of mobile games software, PC games hardware (which includes gaming computers, upgrades and peripherals), and online PC games (including DLC, IAP and subscriptions) could take just under three-quarters of total games market revenue by 2022. If mobile games software continues to outperform forecasts, it could deliver in the $55 billion-$60 billion range this year, and grow to $90 billion-95 billion by 2022. PC games hardware sales could hit $30 billion-$35 billion in 2018, growing steadily to between $40 billion-45 billion in the same timeframe. Lastly PC online games could drive $20 billion-25 billion this year, also growing steadily to $25 billion-$30 billion by 2022. 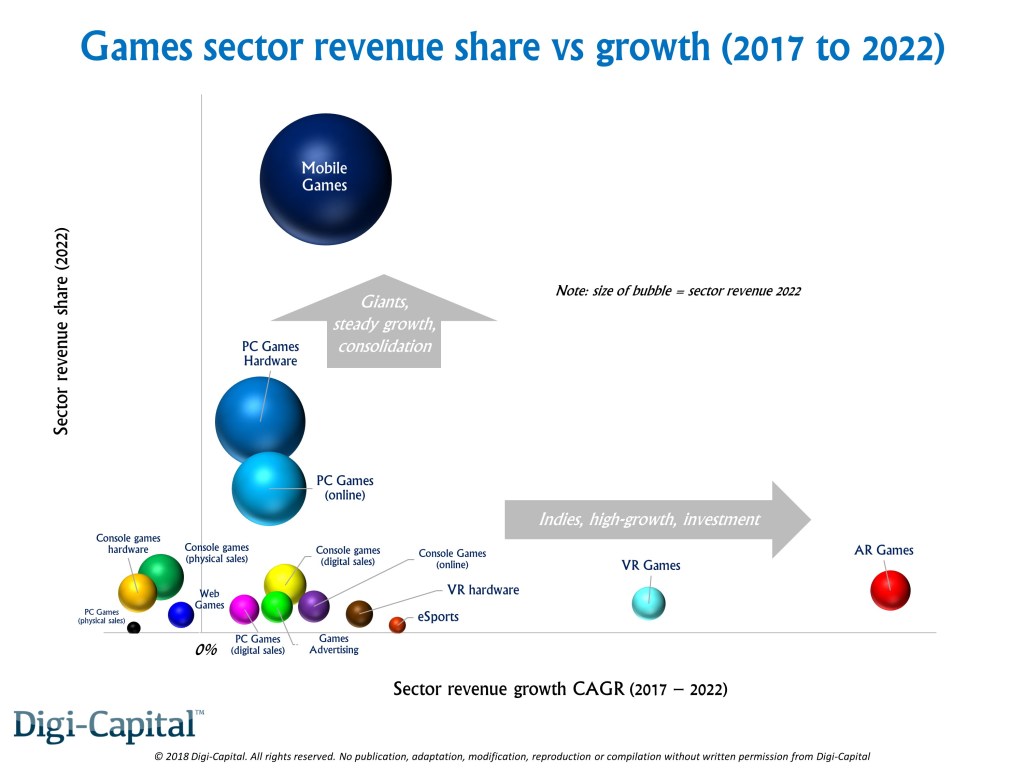 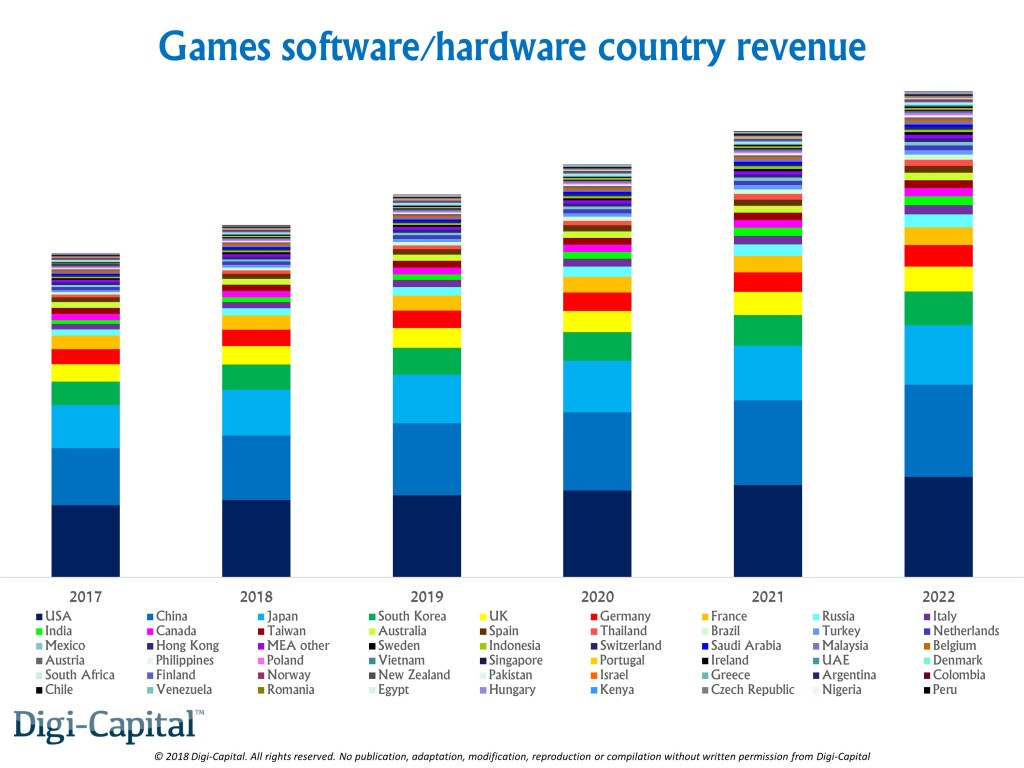 The US, China, Japan and South Korea together could take nearly two-thirds of global games market revenue in 5 years. But when grouped into regions with the 50 other games countries Digi-Capital covers, Asia should continue to be bigger than North America and Western Europe combined.

There are huge differences in games industry growth rates across countries, but at a regional level, Asia’s combined scale and growth are driving the industry forward. Some of the highest revenue growth rates are also coming from countries which won’t hit the top 10 in five years, with several Eastern European, Latin American and Middle Eastern/African countries seeing significant revenue growth from a small base. 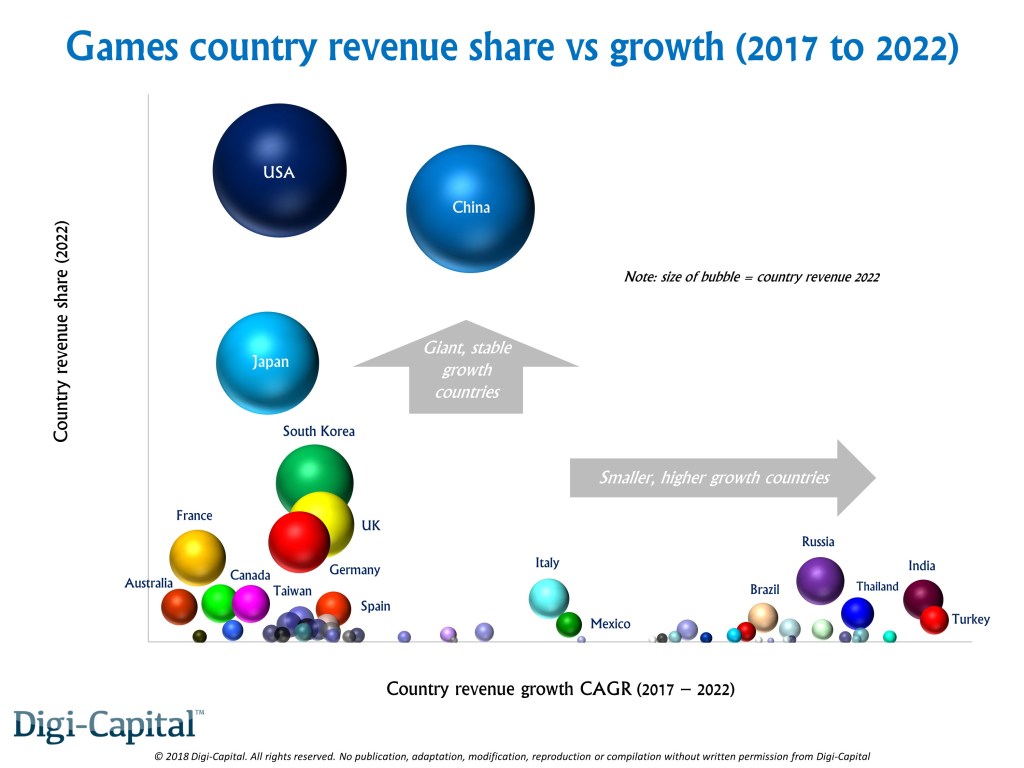 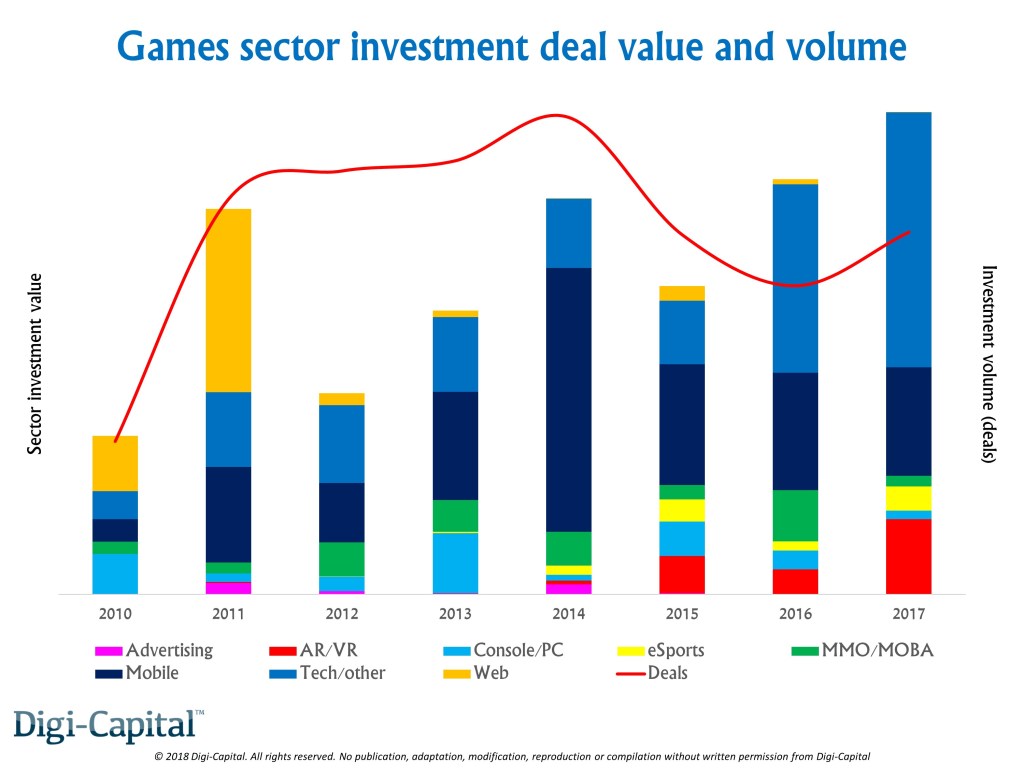 All of this scale and growth has led to two consecutive years of games investment growth, with VCs from Sand Hill Road to China pouring a record well over $2 billion into games startups in 2017. The biggest investments were in games core tech, mobile games and AR/VR games sectors. Esports also generated a huge amount of interest, but not the same level of investment.

In contrast, games M&A dropped back below $5 billion to its most recent low point of 2015 due to a lack of giant games acquisitions in 2017 (unlike 2016’s record over $28 billion). To balance this decline, the games IPO market rebounded to a record high last year led by Netmarble, SEA (Garena) and Rovio. The next 12 months could determine whether the last decade’s three-year games IPO cycles hold true, with one big year followed by two quiet ones. Altogether 2017’s total games market exits (M&A/IPO combined) delivered lower dollar value, but higher deal volume than the year before. 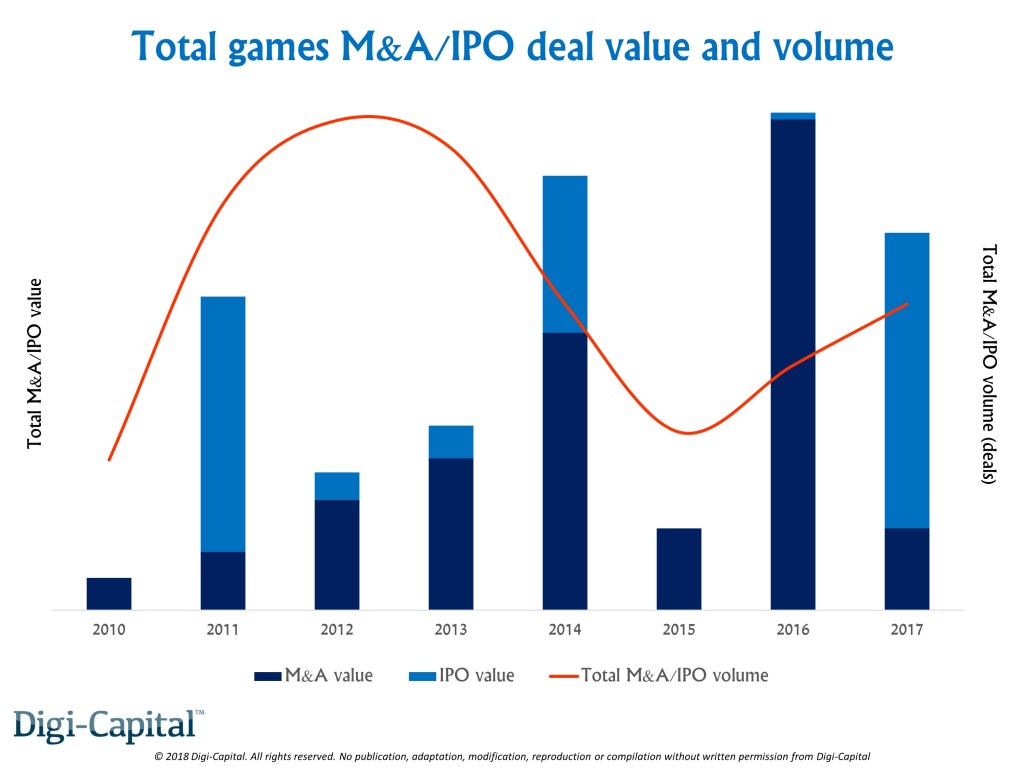 Above: Digi-Capital: Total games mergers and acquisitions and IPO deal value and volume

Games has become a largely consolidated market where giants rule, but indie developer hope springs eternal. The next few years could see a new wave of giants emerge from early-stage sectors that promise to become the future of the industry.

(You can read more in Digi-Capital’s new 206 page Games Report and Database Q1 2018,including games market analysis and forecasts from 2017 to 2022 for all games sectors)