It’s Discord’s third birthday, and the company is celebrating by sharing some numbers and improving its underlying technology. In its latest patch, larger servers with a ton of people perform better, which is important considering Discord has 19 million daily active members … and also because Fortnite exists.

If you’ve used Discord a lot, you know that bigger servers with thousands of members can put a strain on your CPU. The company has fixed this, and now it says that processor and network usage is consistent for servers with 100 people or 100,000 people. Discord has also improved data and battery usage overall for the mobile apps. You can find all of the fixes and upgrades on Discord’s changelog.

As for its anniversary, Discord has seen some massive growth. That daily active number of 19 million is up from 8.9 million in 2017. And while twice as many people are using Discord each day, they are more than twice as active as they were at this point last year. The service handles 15 billion messages each month, and that’s up from 6 billion at Discord’s second anniversary.

Here’s an infographic from Discord that shares some of its numbers: 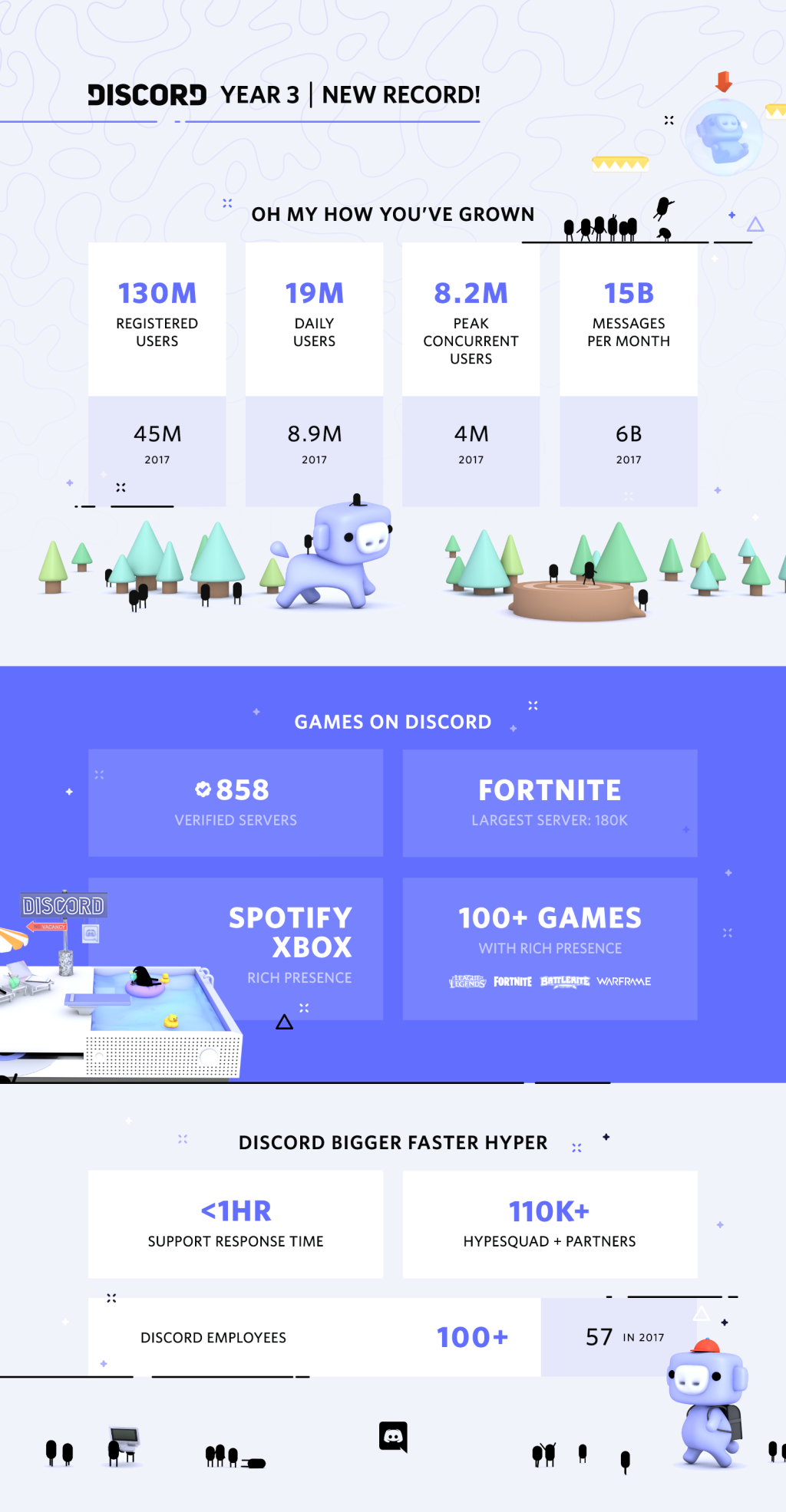 As with Twitch and spending on headsets and currency cards for Xbox Live and PlayStation Network, Fortnite is behind a lot of Discord’s growth. The company specifically pointed to Epic’s battle royale shooter as the reason it needed to better support larger servers.

The official, verified Fortnite server has 180,000 people, which is the largest on the platform. But Discord says that can now grow much larger without suffering performance, usability, or network problems.

Discord and Fortnite’s relationship reached the pop culture in March when popular Twitch broadcaster Tyler “Ninja” Blevins played the game with rapper Drake. To better communicate with one another, Ninja had Drake install Discord live during his stream.

Drake is currently installing @discordapp Is this really happening? pic.twitter.com/GaWlTgFDKi

But even with a celebrity endorsement like Drake’s, Fortnite is still one of the main driving forces here. What’s especially good for Discord is that even if Fortnite fades from popularity (I don’t think that’s likely any time soon), Discord should outlast it whenever the next phenomenon comes along.