While there’s no dearth of VR shooters out there, military sim enthusiasts searching for a VR version of Arma or Rainbow Six, where tactics trump flashy firefights, don’t have many options. Downpour founder Dante Buckley was one such fan, and when he decided to make his first game, Onward, after a stint in hardware development, he knew it had to be a military sim.

Onward pits squads of MARSOC marines against their opponents, Volg, in tactical battles across cities and deserts. Like Counter-Strike or Socom, players are limited to one life, with no respawns. While players can heal each other, when they’re dead, that’s it. “It’s a style I really loved growing up,” Buckley says. “And I wanted to bring that to VR and make sure it doesn’t get forgotten in this next generation of games.”

Onward goes several steps further, however. There’s no screen clutter, for one. The decision to eschew a HUD was an easy one for Buckley to make, and one that made sense for the game as both a VR title and a military sim.

“You have to look to see who’s on your team. There’s no identification, no things hovering over their heads, so you have to get used to their voices and play-styles. You have to use the radio to communicate with your team and keep aware of what’s going on. It just forces people to play differently than they’re used to. So not having a HUD was a design choice made early on.”

Instead of using a mini-map or radar to identify enemies, players have to listen for hints that the enemy might be right around the corner or hiding just behind a wall. When an ally is shot, you can’t just look at a health bar, so you need to check their pulse to see whether they’re just knocked down — and thus can be healed and brought back into the fight — or dead.

“We wanted to encourage players to interact with each other like they would in the real world,” Buckley explains, “rather than just checking their HUD.” 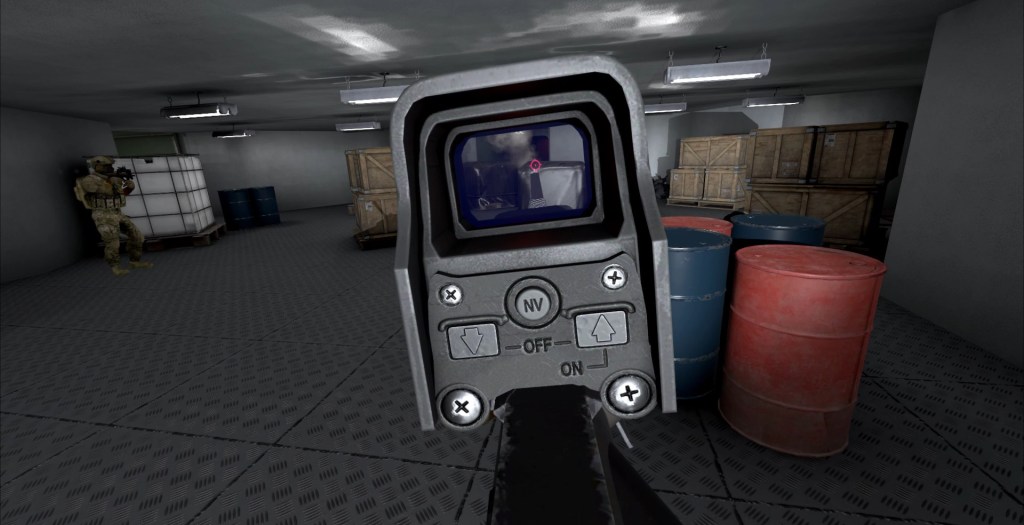 Buckley wants the mixture of immersion and a lack of hand-holding to inspire more player creativity. He cites things like players laying on the ground and playing dead. Enemies ignore them and, when their backs are turned, the not-at-all-dead players get up and take them out. You’ve got to be a little paranoid when you see a body, then.

When Buckley started working on Onward, he was doing it all himself, but last year he was able to hire a team of four. The extra hands mean that a lot of the existing game is being improved upon, from the maps to the guns.

“We’re still working on updating some things. We had to use asset stores to create these maps. When I first started, it was just me — I had to balance out programming and map design and sound design, so using asset stores like Unity and other places was really helpful in fast-tracking the process and getting a vision set early on. But now that I have a team, we’re going back and updating things and making them higher quality.”

The addition of a weapon artist has been a particular boon, says Buckley. “When you could first play the game in August 2016, the weapons looked like crap. Now an awesome weapon artist has joined us and he’s going back through the game updating each weapon. Things are looking really good now.”

Beyond making them look good, Buckley also wants to ensure that each weapon handles realistically. He’s used feedback from alpha testers, marines, and his own experiences from gun ranges to create the firearms.

Tools of the trade

“There are different ergonomics for each weapon,” he explains. And they’ve got different grips and reload styles. “That’s something to consider that most non-VR games don’t. With other games you just click ‘R’ to reload. You never really need to think about how you hold it or reload it. That’s something cool that we’ve translated from the real-world.”

It’s an extra layer of interaction that you can even see in the way that you use something like a pair of night vision goggles. Instead of just hitting a button, you have to actually grab the night vision goggles that are on your head and pull them down over your face. And when you’re done with them, you need to lift the goggles up. 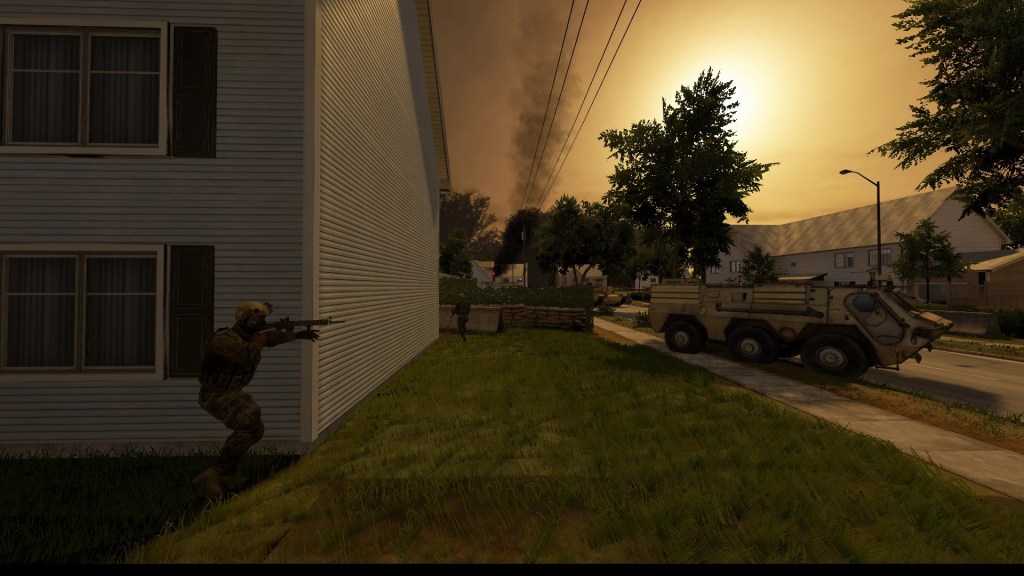 All of these tools and weapons are selected in the lobby, before a match. Players can pick their primary weapon — pistol, gear like grenades or syringes, and finally weapon attachments such as scopes, suppressors, and various foregrips. Everyone has access to the same equipment. There’s a limit to how much you can add to your loadout — everyone gets 8 points to distribute as they see fit — but that’s the only restriction.

“That’s something I wanted to make sure was in the game,” says Buckley. “I know a lot of games have progression systems, which are fun, but it can kill the skill-based aspect of some games, where the more you play, the more stuff you get, versus getting better.”

The problem right now is that the haptics can’t match Buckley’s ambitions. Since the controllers aren’t in the shape of weapons, and they only vibrate, it’s hard to forget that you’re just holding some weird-looking controllers. But there are people and companies creating peripherals that the controllers can be slotted into, calling to mind Light guns.

Onward has been on Steam Early Access since August 2016, and Buckley considers it an overwhelmingly positive experience. “I can’t say many negative things about it. It’s been awesome. I’m super thankful because it gives me and my team an opportunity to show the world that we can make something big, and improve on it. Under any other circumstances, if there wasn’t an avenue like this to make games and get them out into the world, a game like Onward might not have existed.”

The early release has also allowed Buckley to watch a community grow around the game, which he thinks is helped by VR. “What makes us feel more together is that we can jump into VR and see each other, and see expressive behavior. You can see body language in-game; it’s more than you get with a mic and a keyboard. Since people can emote how they’re feeling, it’s a little bit more real.”

The end of this phase is almost in sight, however. Onward will launch by the end of the year, and Buckley promises some big announcements before then. In the meantime, you can play the early access version on Steam.