Drawfee is normally a zany art channel on YouTube, but earlier this month, it hosted a two-day game jam sponsored by the anime hosting site Crunchyroll. Developers such as Teddy Dief (Hyper Light Drifter), Jo Fu (Ghosts of Miami), and Ethan Redd (Blazing Legion: Ignition) participated in the event, and you can download all five PC games for free on its page today.

Drawfee spun off from the comedy websites CollegeHumor and Dorkly. It started initially as a fun way for staff illustrators to warm up, but it’s since taken off as its own channel on YouTube. Artists Nathan Yaffe and Caldwell Tanner founded Drawfee, and they take turns hosting the episodes along with CollegeHumor illustrator Jacob Andrews and Dorkly’s head illustrator and managing editor Julia Lepetit.

The way it usually works is folks will comment with a concept, and then the illustrators will record themselves drawing and riffing off of it. Head of video at Dorkly Tony Wilson describes the series as what it’d be like “if Bob Ross was really into anime.” For instance, several episodes have played with the idea of “bad Japanese role-playing game,” building out a whole world that poked fun at genre tropes. Other episodes have titles like “Three Artists Try Drawing Zelda Bosses from Memory” or “Artists Draw Dragon Ball Super Characters (That They’ve Never Seen).”

“One of the core things that started off Drawfee was that they would be doing a lot of live videos, asking, well, what should we draw next, guys?” said CollegeHumor editor-in-chief Andrew Bridgman in a phone call with GamesBeat. “They’d be reacting to the comments and seeing what people suggest and then trying to build that in. That helped make things even weirder, and also make the audience feel like they were part of the experience.”

“She’d been showing him some episodes of the show, and he started to get really into it, and then he just made a casual tweet at Drawfee saying, ‘Hey, when’s Drawfee going to do a game jam based on their bad JRPG series?'” said Wilson in a phone call with GamesBeat. “A few of us saw that in the office and we started talking about how exciting it was that the guy from Vlambeer likes Drawfee videos, and then we started saying, ‘Wait a minute, why don’t we make this actually happen?'”

Wallick and Ismail brought on a lot of the developers who participated in the jam, such as Dief, who asked composer Akash Thakkar to join and help out with music and sound design. 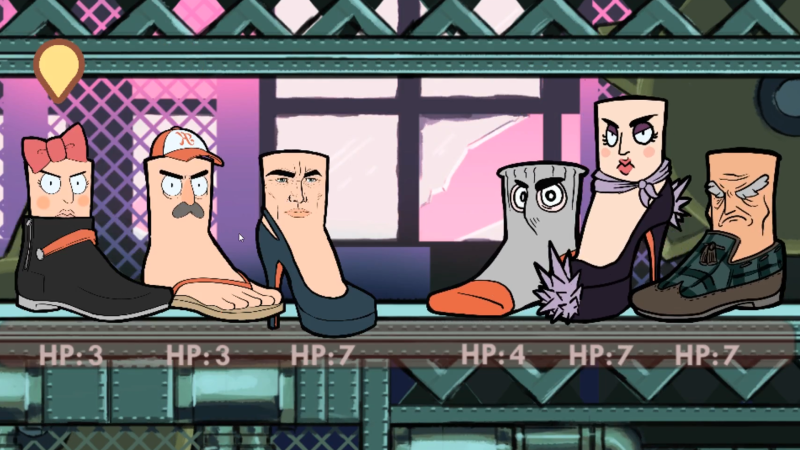 Above: Kickin’ It: Shoes Your Destiny

The entire game jam was livestreamed on Facebook, so viewers could get a peek at the development process as well as offer suggestions. Drawfee also provided some ideas that the developers could pick from, recording concept videos before the event. However, the teams didn’t have to stick with the original idea. For instance, Dief and his team members, Redd and Jenny Jiao Hsia (Beglitched), ended up developing a game that was quite different from the initial brainstorming session.

The three adopted The World Trees as their team name, and they originally planned on making a JRPG-esque game that involved killing gods with airships and collecting them in a purse.

“I mean, it’s a funny joke to say that JRPGs always feature killing gods because it’s true, but — I don’t know,” said Dief in a phone call with GamesBeat. “We were in a nonviolent mood, I suppose. With that as a start, we also had this idea of turning [the gods] into pins and collecting them. That was really a jumping-off point, because we started looking at pin designs and aesthetics for the game, and all of our references ended up being these ’90s bright-colored Japanese malls and American malls.”

Their game, Zodiac Mall Ball, is a brawler on roller skates where up to four players compete for coins and collectible pins to appease the gods. It’s got a colorful aesthetic, a kind of mishmash between Hsia’s and Redd’s artwork. Dief asked them to join the jam because he’d seen their work on Twitter and was a fan. But it was somewhat challenging to figure out how the two would collaborate on the project, since they both have very strong styles.

“I know that they have different aesthetics, but I was betting on the fact that because they both like simple shading and flat colors, maybe something cool would come out of them working together,” said Dief.

Dief has participated in dozens of game jams before, and he says he was a little worried about being on camera for the entirety of the Drawfee jam. However, the community was fortunately very positive — plus his main focus was on making a good game.

“I knew that the challenge of building a jam and making it entertaining is hard. But I knew that at the very least, I was going to get a jam out of it, and a jam, for me, early in my career, was an amazing way to try ideas and not be too scared of them failing, because expectations were low,” said Dief. “At this point in my career it’s really cool, because I get a chance to do collaborations. That was one of the reasons I really wanted to do the jam.” 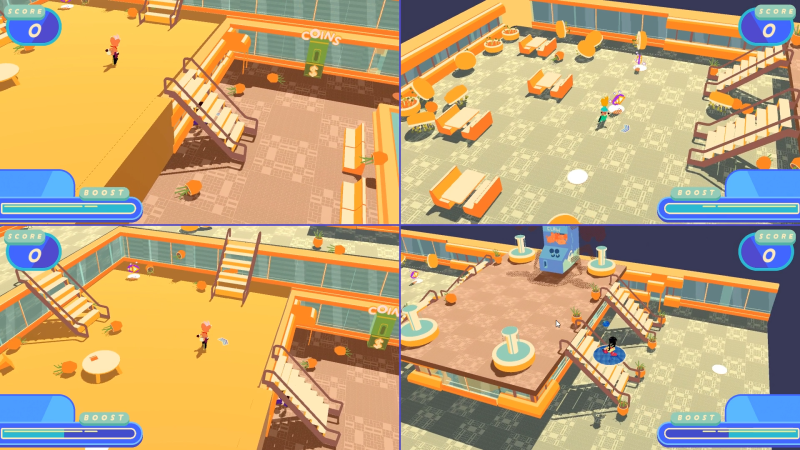 Behind the scenes on game development

An interesting aspect of the Drawfee Game Jam is that it gave the viewers a look at the creative process that goes into making games. It’s something that devs occasionally volunteer by sharing development logs and posting in-progress screencaps. And most indie studios are always tapped into social media, hearing what fans hear about their work.

“I think that the consequences of game-makers becoming visible have been a mixed bag,” said Dief. “But I think that it’s necessary. I think that the idea of people being familiar with who makes these things, and how the audience engages with us, and how we engage with them, it’s in its infancy. There’s not a lot of proper platforms to manage it.”

Dief says that ultimately, it was nice to have the community following along with the process. Unlike on longer projects, where developers often have to keep quiet about the kind of work they’re doing, Drawfee provided a constant audience and the team could share artwork and design as they went.

“I think just exposing this process, exposing what we go through and the amount of work it takes to put these things together, hopefully increases an empathy there,” said Dief. “Because for creators, and especially game-makers, a big part of our job is empathy. We have to think about what the player is going to expect coming into the game and the experience we’re giving them minute to minute, how they’re feeling and what they want from the game, what the game is giving them and what the game is holding back from them. And so — I’m just a fan, I guess, naturally, of players being able to return that empathy and understand the process we go through to give them something we hope they’ll love.”