The idea behind Dreadnought is something I’ve wanted in video games since I spent my mornings watching Star Blazers before rushing off to elementary school — big spaceships with big guns blasting one another to smithereens.

Seems I’m not the only one. Mike Barr used to watch it after school (note: Star Blazers is the English localization of Space Battleship Yamato, one of the seminal sci-fi anime series from Japan). Dreadnought’s capital ship battles drew him to Six Foot, the studio working with publisher Grey Box and Yager Development (the Spec Ops: The Line studio) on the free-to-play multiplayer game. It’s in a closed beta test for PC, and it’s entering a similar test phase on the PlayStation 4.

Barr is the lead producer for Dreadnought. It’s a team shooter, but instead of playing a soldier or over-the-top character (such as an esports star-turn-mech pilot D.Va in Blizzard’s sensational Overwatch), you’re the captain of a cruiser, from a small-but-speedy corvette to a massive dreadnought. It’s five-on-five, and it has the standard roles you’d find in such games: scouts, healing (or repair, in this case), artillery, damage-dealers, and tanks. You can buy skins and other cosmetic items to gussy up your vessels. It also offers premium-tier subscriptions that not only give you Elite status and boost the rate at which you earn XP but also give that boost to your teammates.

A longtime veteran of free-to-play game development (he started his career on Dark Age of Camelot, a massively multiplayer online role-playing game that launched in 2001), Barr spoke to GamesBeat after a demo last week in San Francisco, where we talked about his love of sci-fi and big starships, making free-to-play games and dealing with the market, and what led him to working on Dreadnought. This is an edited transcript of our conversation.

GamesBeat: You mentioned Star Blazers. There were fighters on the show, but it was mostly about big ships-versus-big ships.

Mike Barr: Right. It was about the Wave Motion Gun, about the Argo and all the other ships coming at it and how it could fend everything off.

GamesBeat: Have you always wanted to make that sort of a game?

Barr: I’ve always had an affinity for sci-fi. I was always drawn to ships like that. When I heard about Dreadnought and what it was, I was very excited to be attached to the project.

GamesBeat: I didn’t expect artillery in a game like this.

Barr: That’s funny because that’s the ship I’m drawn to. I love the artillery. It’s that massive effect. You just bolt somebody and they’re wrecked. You lock yourself down in siege mode and fire it off three times and somebody gets wrecked. It feels really rewarding. Above: This is a tier V artillery cruiser in Dreadnought. Where’s the Wave Motion Gun?

GamesBeat: When it comes to dealing with the tech involved — the engine works on any platform, but is there any difference in dealing with the animations when you look at the PC side over the console side?

Barr: Yes, there are different challenges. On the PC you have — people are constantly upgrading machines. New video cards come out, updated drivers, and all that. With the consoles, that’s what the console is. You have different generations, but you know what you’re dealing with, and there are certain limitations.

GamesBeat: When you’re developing on the PC side, do you ever have to think about how to make things work for Intel versus AMD and the like?

Barr: You definitely have those concerns. You reach out. You have relationships with people who make the hardware, and you talk to them. You make sure you have drivers that work the way you need them to, that they’re considering your game. If you run into problems, you ask them because sometimes, they have expertise in why you’re running into this problem. It’s a relationship.

GamesBeat: You’re doing this three times over, right, because you’re also dealing with the custom chip in the PS4. Does that necessitate three different teams?

GamesBeat: When you’re making this game and playing it for tuning’s sake — the first comparison I think of is World of Warships. Have you played that?

Barr: Yes. We had the World of — in the year I’ve been here, we’ve had World of in mind because they have several games, vehicle games, and they reach a fairly wide audience. People understand that going in before they pick up a game like Dreadnought. I think it feels a little more like — Peter[Holzapfel, the game directer at Yager] talked about Trafalgar, that style of naval battle, broadsiding each other. I think World of Warships might hit it a little closer. But that idea of battling with vehicles and progressing your vehicles up through tech trees and getting different things.

GamesBeat: One thing I liked was how quickly your main guns reload. In Warships, you’re sitting there with naval cannons that take a long time to reload. They go for some historical accuracy, whereas for you, there’s no such thing. How hard was it to look at your ships and say, OK, how quickly should we pace this?

Barr: We were talking about the artillery cruiser. You can’t have an artillery cruiser that does that massive amount of damage that can fire every second. You’d just win. So you have to slow the reload time on that. But I think we’ve taken the reload concern to the next level with energy management. You have to pick and choose there because once you blow through all your energy, you have a cooldown, and you have to wait for that to build back up.

GamesBeat: I noticed there wasn’t something in the HUD telling me I was running out of energy. Or did I just not notice it?

Barr: There should be something where the audio says, “Energy Systems Offline.” But there’s no visual flash or anything, yeah. That’s something I’ll talk about. I haven’t had a lot of feedback on that, but typically — we get feedback from players who play a lot, so by then, they’re pretty comfortable with it. That’s more like a focus-testing kind of — the first time you play, you may not pick up on that right away.

GamesBeat: You were talking about trying to get some of that sort of bridge chatter in the game. Are you aiming for more of that?

Barr: There’s a decent amount. After you get a kill, sometimes you’ll get a report from your weapons officer. After your energy runs out, you get reports. Depending on certain conditions that are triggered in the match, you’ll get different reports. It’s not constant, but you should hit it at several points in the match.

GamesBeat: Moment to moment, it reminded me a lot of the second season of the Battlestar Galactica reboot.

Barr: Yeah, the battleship warps in, and the raiders come in, and you have to scramble the fighters, and Galactica starts firing. 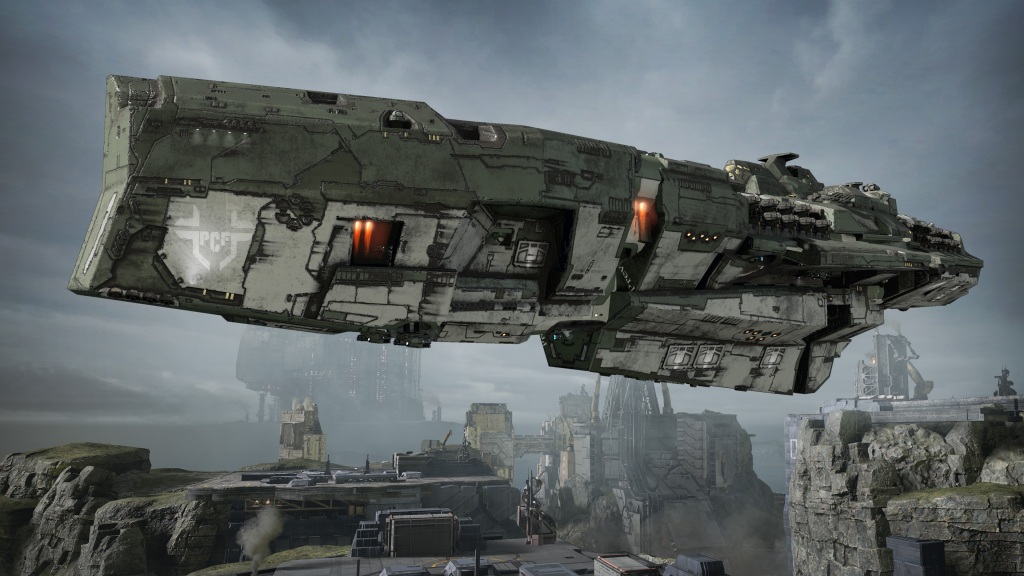 Above: This a Morningstar-class battleship. Still no Wave Motion Gun.

GamesBeat: It’s a far more agile ship than from that series. It’s a different approach to combat, and I haven’t really played a game like that with big capital ships. We talked about tuning for the big guns, but for the rest of the ships and their roles, like artillery? How hard was it to get that feel?

Barr: The destroyer and the dreadnought are not too far off. One is a little smaller, a little faster. The dreadnought is more like that tank with more abilities. They’re not too hard to balance apart. But then, it’s working out. We’ve gone through iterations where maybe the artillery was ruling the day. It was doing too much damage, or it was firing too quickly. I remember one case where, if you played the artillery — its turn radius, for the one with the big cannon, is pretty slow. Previously, it wasn’t quite as slow, and you were just able to rule the day because you could spin around and target the next guy quickly. We had to slow that down a little bit. It’s like any game. You need to do a fair amount of testing balance. Then, you get it out to the players and get feedback from them. We had some ships where the healing was overpowered — on some of the heavy tacticals. We needed to tweak that a little bit, so that’s not the ship that’s rolling. People would get two of those in a match with three dreadnoughts, and the dreadnoughts could never be killed. We had to balance that.

GamesBeat: I was playing with a tier-two destroyer, I think. How big do the dreadnoughts get?

Barr: The sizes don’t really change much. Your big dreadnought at tier two is pretty much the big dreadnought. What’s different is there’s vastly more hit points and armor. The battles become more of a slugfest as you go toward the veteran and the legendary.

GamesBeat: The scale, size-wise, between a destroyer and a dreadnought isn’t too different. It’s just how they’re loaded out and how they maneuver?

GamesBeat: Did you ever try using ships that were significantly larger than others?

Barr: If they did, it was before I got here. I don’t think they did, though. I think they pretty much had the scale they were going for and stuck with it.

GamesBeat: Players-vs.-environment (PvE) isn’t in the game yet, right?

Barr: The Havoc mode we’re playing right now will be in very shortly for PS4. That’s a three-player wave mechanic setup. That’s coming in. We’re working on different PvE. The idea is more like a story mode, where you’ll get a bit of lore, some kind of story going on, and maybe five missions that link together in a PvE scenario.

GamesBeat: Would you ever have scenarios where you’re attacking a static target, such as a star base?

Barr: We’ve considered things like that, yeah. Or a mission where there are cannons on the ground and you’re taking those out. There’s a PvE mission right now that exists on the PC called Onslaught. In that case, there are capital ships for each side, and they’re worth the most points. You can defend yours or destroy the other team’s, as well as all the little fighters and destroyers that you can take out that are AI-controlled. It’s a mixture.