In 31 days, I will get on a plane at Denver International Airport headed for the Electronic Entertainment Expo trade show in Los Angeles, but I don’t know why — considering E3 has already begun.

This morning, Walmart Canada listed several unannounced and unconfirmed games on its database. These include Splinter Cell from Ubisoft, Borderlands 3 from Gearbox, and Rage 2 from id Software. It also includes some more questionable entries like “Forza Horizons 5,” which is odd because the last game was Forza Horizon 4 and this new one seems to have multiple horizons. I don’t know if this information is accurate. Walmart could be popping placeholder titles into its system until it learns more, and I’ve asked if that’s the case. I also asked for more information from the publishers/developers whose games may have been outed here, and I’ll update this story if they provide any additional details.

But the accuracy of Walmart’s gaming database doesn’t matter. The list seems reasonable, but the point is that the biggest show for new game announcements and reveals is upon us right now even if the Entertainment Software Association says E3 doesn’t begin until June 12. And that’s because E3 truly starts when you can no longer ignore it or put off thinking about it. 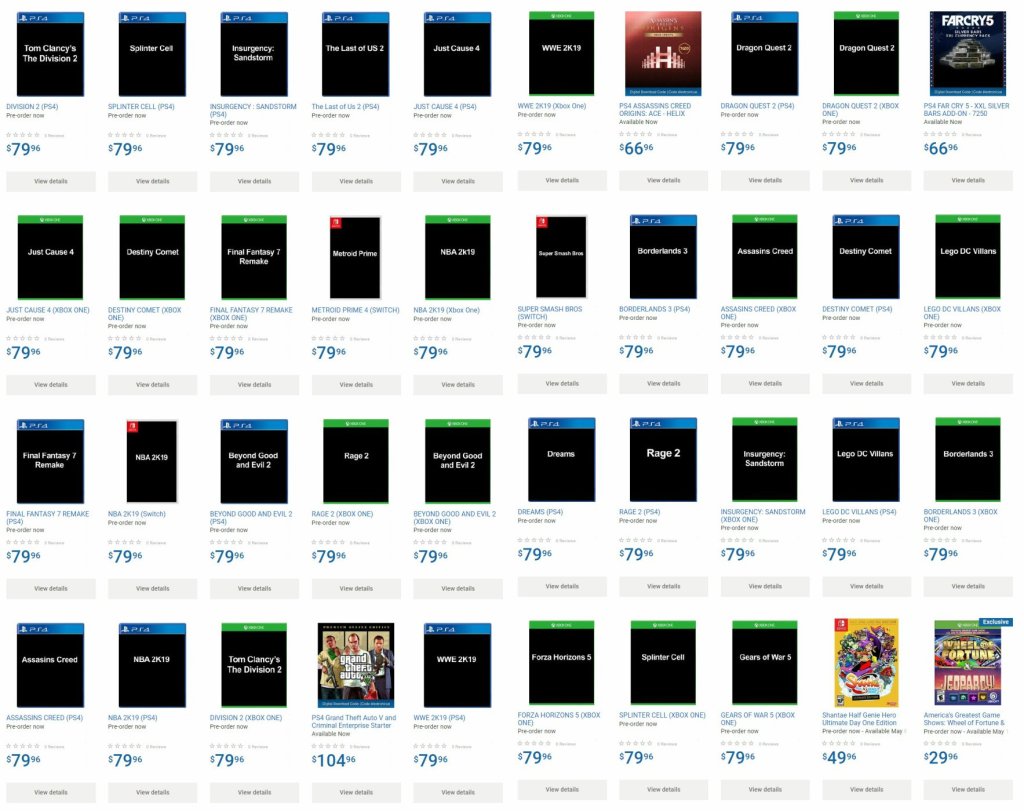 Above: The passengers on Amtrak’s E3 Express Hype Train.

E3 is top of mind for me. A significant percentage of my inbox is scheduling emails for the event. I, for one, cannot wait to check out “Unannounced Game 2.” I will spend the next several weeks putting together a schedule, breaking it apart, and putting it back together again. I will then throw it out after the first media presentation from a major company prior to the show opening because they will announce a game I want to see that I will need to make room in my schedule for. Google needs to hurry up with those A.I. assistants already.

I’ve had E3 in the back of my mind for a few weeks now. As part of my job, I’ve dug around for details on upcoming, unrevealed games like Battlefield V. Like you would expect, that World War II shooter will have a massive presence for Electronic Arts at its E3-adjacent Play event.

As for the executives, managers, and public relations pros that are putting together E3, the event started months ago for them. Of course, that planning has turned into action over the last month because we don’t have any other major expos or trade shows between now and the weekend before June 12. PAX East was in early April, and everyone has had their all-hands E3 meetings since then, and the results of that are showing up in my emails and on social media.

This is normal. Planning E3 has always lasted far longer than the show itself. What’s different these days is that fans are better trained than ever to look for leaks and to understand them. And, in turn, gamemakers are better than ever at catering to that hype to get people excited. This means that E3 lasts longer for anyone who is paying attention as well.

As an example of what I’m talking about, look to Bethesda Softworks and id Software. Before the Walmart leak, no one was talking about the possibility of a Rage 2 showing up at E3. The original Rage was a 2011 id shooter for PC and consoles that left fans and critics mixed at best. It was even easier to forget about Rage after id Software launched the remarkable Doom reboot in 2016. If anything, most fans were expecting a sequel to that game to show up at E3. So when I was looking at the Walmart listings, Rage 2 was the game that stuck out to me as evidence that this was all made up.

I’m almost certain that Rage 2 is real now, but again that’s not the point. Bethesda and its teams understand that E3 has already begun. We are in it, and by responding quickly and humorously, Bethesda is taking advantage of so many gamers paying attention to every tidbit of information involving new games. And that has skyrocketed Rage 2’s profile from either silly prank by a Walmart database-entry employee or an honest mistake by one of the world’s largest retail corporations to a new E3 game that we can all start speculating about.

I’m sure that some other companies will maintain a poker face. That’s probably smart for a publisher like Microsoft that needs to make a big splash with its media presentation, so every surprise helps. But for something like Splinter Cell, Borderlands 3, or Assassin’s Creed, publishers should start mimicking Bethesda’s strategy here and start playing along with the leaks in a responsive and teasing way to build up as much hype as possible.

Because if E3 is going to last 5 weeks, you might as well make that work to your advantage as a publisher.