I had the opportunity to play some of Final Fantasy XIV: Endwalker ahead of its November 23 release thanks to a media preview event. While I was excited to try out the MMO expansion’s two new job classes, Reaper and Sage, I also had to check out the updates to my favorite: Red Mage.

The Red Mage is a ranged, magic-based damage-dealer. The job debuted in FFXIV’s second expansion, Stormblood (Endwalker is the fourth). FFXIV lets you play multiple job classes on the same character, so I’ve been able to try a bunch of them. Red Mage stood out because it’s something I always love in RPGs: a battle mage. But even then, it’s a unique take on the concept. The Red Mage has a rapier that can also act as a staff. In practice, it’s like if Zorro knew how to cast spells. So, in other words, it’s awesome.

And Endwalker is making Red Mage even more awesome.

Before I was able to play, Final Fantasy XIV director and producer Naoki Yoshida greeted members of the media and noted that he wished to thank all COVID responders and members of the medical community for their efforts during the pandemic, and he expressed a desire for us in the media to do the same as part of our coverage. So I’m doing that now. Thank you, everyone! Yoshida also wanted us to note that we played an in-development build of the game, so details are subject to change.

So what makes the Red Mage so different in Endwalker? Well, in some ways, not a whole lot. Unlike some jobs, like Summoner, Red Mage didn’t get a major rework. The job still revolves around you generating mana while casting spells until you’re able to close in and perform a powerful melee combo.

There are, however, a few new abilities. Magick Barrier is one of these. This will help reduce the magic damage that nearby allies take while increasing the amount of healing they receive. Ever since the original Final Fantasy, Red Mages have stood out with their versatility. This tradition has carried over to FFXIV, with Square Enix giving the job a good amount of support abilities, including ones that let them heal allies and even resurrect dead players. Magick Barrier adds to that “jack-of-all-trades” flavor that makes Red Mages special. 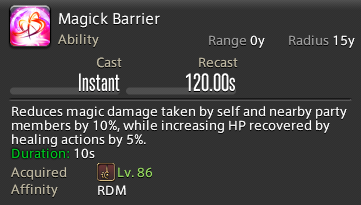 If you’d rather just deal big damage, however, look at Resolution. This is the new finisher to the Red Mage combo, and it’s a flashy attack that shoots out a spiraling laser in front of you. 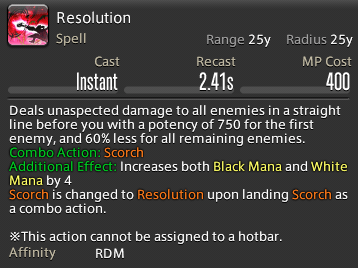 But it’s the smaller, quality-of-life changes that make Red Mage feel so much better in Endwalker. For example, you can now perform that powerful magic combo after your single-target melee combo — like you could before — or you can do so after using three Enchanted Moulinets, which hits multiple enemies. And that magic combo now deals AoE (area of effect) damage instead of just hitting a single enemy. This makes fighting multiple foes much more interesting.

Endwalker also gives a pivotal Red Mage spell, Acceleration, an extra charge. This means you can bank two uses of the ability, which helps adds stability to your mana generating attacks. It’s a pivotal skill for Red Mages, and now we can use it more often. 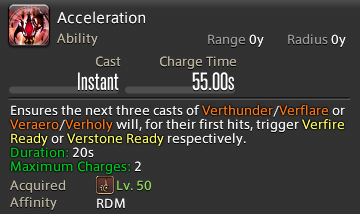 Speaking of mana, Endwalker retools that system a bit or rather makes it more convenient. You see, in order to start your melee combo or attack with Enchanted Moulinet, you need a certain amount of Black and White Mana. You used to need at least 80 of each to start the melee combo, with each resource capping out at 100. Now you just need 50 of each. Granted, the game changes the amount of mana each ability generates to match this, but you’re now less likely to cap out on Black and White Mana before you can use those resources.

Also, the ability Manafication used to double your Black and White Mana. Now it just gives you a flat 50 of each when you use it. This just makes the ability much simpler to use efficiently. Press this button, and you can launch right into the melee combo. 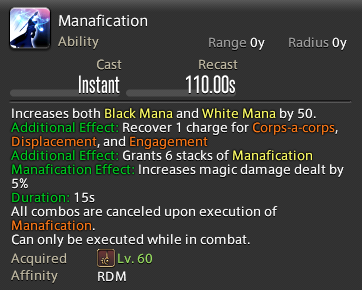 I can get into even more, like how Displacement and Engagement now deal the same amount of damage, so you no longer have to risk backflipping off the arena to your death just to get a little extra power in. Oh, and like with Acceleration, you now get two charges of Displacement, Engagement, and Corps-a-corps, so you should be a little more mobile during battles.

I’m impressed with these changes. Red Mage was already a popular and powerful job class. The FFXIV team didn’t need to do too much to it for Endwalker, but it still found ways to make Red Mage feel like an improved, more powerful evolution of its Shadowbringers iteration.

I think Red Mage is going to remain my favorite Final Fantasy XIV job through at least a good chunk of this new expansion.