Felix “PewDiePie” Kjellberg used the N-word on a recent YouTube livestream, and that has some people upset with him — including Firewatch co-creator Sean Vanaman. After getting frustrated with another player during a match in the Battle Royale shooter PlayerUnknown’s Battlegrounds, PewDiePie screamed: “What a fucking n*****.” In the video, you can see him immediately catch himself, which leads to him stammering out a “sorry” and then calling the other player an “asshole” instead.

PewDiePie is YouTube’s top creator. His channel is approaching 60 million subscribers, and his daily uploads get over 4 million views regularly. This makes each of his slip ups highly noticeable (he previously drew attention for making jokes sympathetic to Nazis), and this has people criticizing him once again. During the livestream, the megapopular video creator tried to explain his actions.

“[The other player] did a dick move, and I tried to think of the worst word,” PewDiePie said while laughing. “And I end up saying n*****.”

The YouTube star then went on to imply that he couldn’t have offended any of his true fans.

“I know that no one watching gives a shit,” he claimed.

He didn’t elaborate on why he thinks his fans watching him live wouldn’t care. I’ve asked PewDiePie for a comment, and I’ll update this post with any new information. But in the past he has said that his regular viewers understand that he’s not really racist or bigoted, so when he says something like the N-word, it’s intended as a goof.

But one group isn’t taking his language as a joke, and that’s actual white supremacists and Nazis. In the comments for one of the many videos documenting PewDiePie’s racial outburst, the highest-rated comment asks if the Swedish video maker is “/ourguy/,” which is a meme to ask if a public figure shares white-supremacist values. Someone responds with “88th like,” which is another coded reference — this time to Nazi Hitler salute. 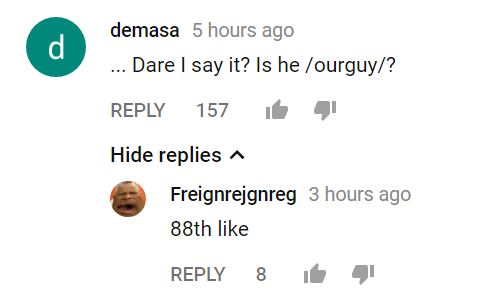 Above: Nazis continue to love PewDiePie.

PewDiePie hasn’t addressed any of this criticism yet, but he did have a laugh about how this might affect his livelihood.

“I just hope I don’t lose my sponsorship deals, y’know,” PewDiePie said, apparently as a goof.

But it seems like his actions could already have at least a small impact on the money he makes from producing YouTube videos because Campo Santo cofounder Sean Vanaman said he plans to file DMCA takedowns of the any PewDiePie videos that feature his games. Campo Santo produced the excellent narrative adventure Firewatch, and PewDiePie has a video with that game that has over 5 million views.

I’ve reached out to Vanaman for more details about his plans to exercise his rights under the Digital Millennium Copyright Act (DMCA) to protect his works. While the DMCA gives creators like Vanaman a pathway to remove copyright violations that they find online, it is an untested law. PewDiePie could claim that he owns the full copyright to his video based on Fair Use, which protects transformative works that include references and content from other texts. But no case has really gone the distance to establish that as a legal precedent.

For now, however, Vanaman seems determined to see it through. As he said on social media in a response to criticism about his DMCA threats on social media, “well, we’ll see what our attorneys have to say about it tomorrow.”