The Xbox division helped Microsoft grow its bottom line during the fourth quarter of its fiscal 2018, the company revealed during its quarterly financial report. Revenue from the video game business was $2.29 billion during the three-month period ending June 30. That’s up 39 percent from the same period in the previous year.

To translate that, Microsoft is seeing a boost in revenue from the Xbox platform as consumers rush to buy games and microtransactions through the digital store. The company specifically points to “third-party title” strength, which is almost certainly a reference to the popular battle royale shooter Fortnite. That game has made nearly $1 billion in digital sales since its debut last year, and much of that revenue has come in the last few months, according to research firm SuperData.

Fortnite is popular on mobile, PC, PlayStation 4, Nintendo Switch, and Xbox One, and players are spending money to get their hands on its virtual cosmetic items. When fans make those purchases through the Xbox Store, Microsoft takes a 30 percent cut. Other popular games like PlayerUnknown’s Battlegrounds are likely having the same effect, but Microsoft publishes that on Xbox One, so it isn’t a third-party title. 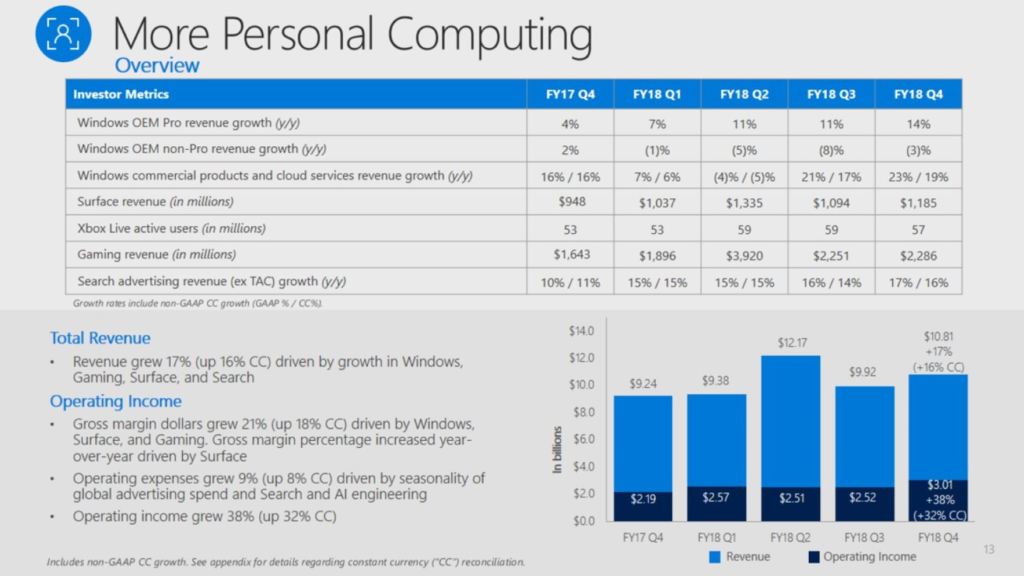 But games like Fortnite and PUBG aren’t just sending more microtransaction sales to Microsoft. The number of people who are using the service is also increasing as Xbox Live active monthly players jumped from 53 million during Q4 of fiscal 2017 to 57 million during the last quarter.

Microsoft also likely saw some new Xbox Live users from a surprising platform: the Nintendo Switch. The universal Bedrock version of Minecraft hit Nintendo Switch on June 26, and that brought with it the option to log into Xbox Live on that game through Nintendo’s hybrid handheld/home console. It’s possible that some Switch players were logging into Xbox Live for the very first time.