Microsoft has found itself with one of the more unlikely annual-release franchises in Forza, and yet the publisher has also discovered a way to keep that series feeling fresh.

After delivering Forza Motorsport 6 in 2015, Microsoft is racing the open-world mixed-discipline Forza Horizon 3 onto your Xbox One and PC on September 27. The third entry in the Horizon spinoff brings its brand of anything-goes driving to Australia this time around, and that makes for the most diverse setting yet for Forza’s automotive mayhem.

Unlike the core Motorsport games, this is an open world where you drive around looking for every kind of driving experience. This means you’ll jump from rally cross matches to illegal street racing to challenges that require you to get as much airtime off a ramp as possible. 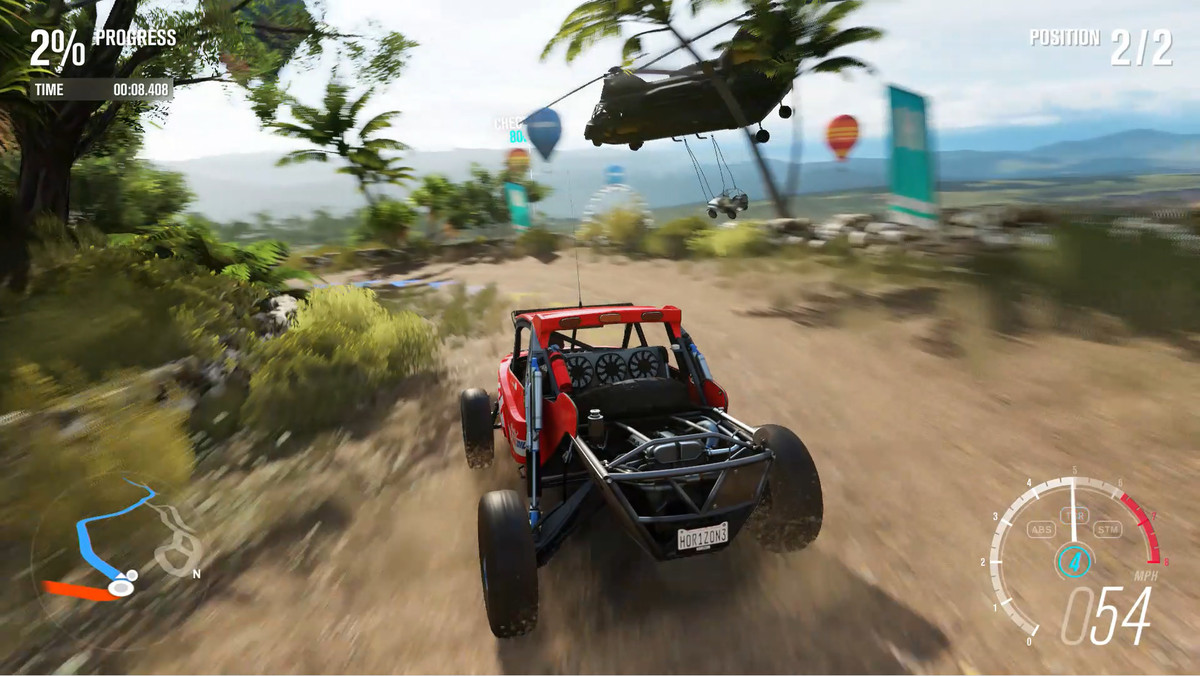 Above: Offroading is huge in Horizon 3.

We’re only two years removed from the last Forza Horizon, which hit Xbox One in 2014. The rapid release schedule for this series is a risk for Microsoft. It’s possible that even the variety of Horizon could start to feel routine.

But that hasn’t happened yet, and it’s because the franchise has added user-generated content.

The act of driving is as sweet as ever

Forza has always expertly translated the physical reaction of fuel exploding inside of a half dozen piston chambers, the friction of rubber meeting the road, and the angry kicking of the gas pedal under a driver’s foot into a video game. Horizon 3 still benefits from that.

This series is almost like riding a bike. You never forget how to feather the right trigger as it violently shakes the first time you drive around a track in the latest hypercar. To me, it’s special that Forza has built and maintained its identity.

Because I’ve spent so much time with Forza, my body can immediately sync up with the game. If I listen to the feedback of the tires screeching on the tarmac, the engine roaring under the bonnet, and the accurate haptic feedback of the Xbox One controller, I’ll have no trouble learning the intricacies of the latest hypercar from Koenigsigg. 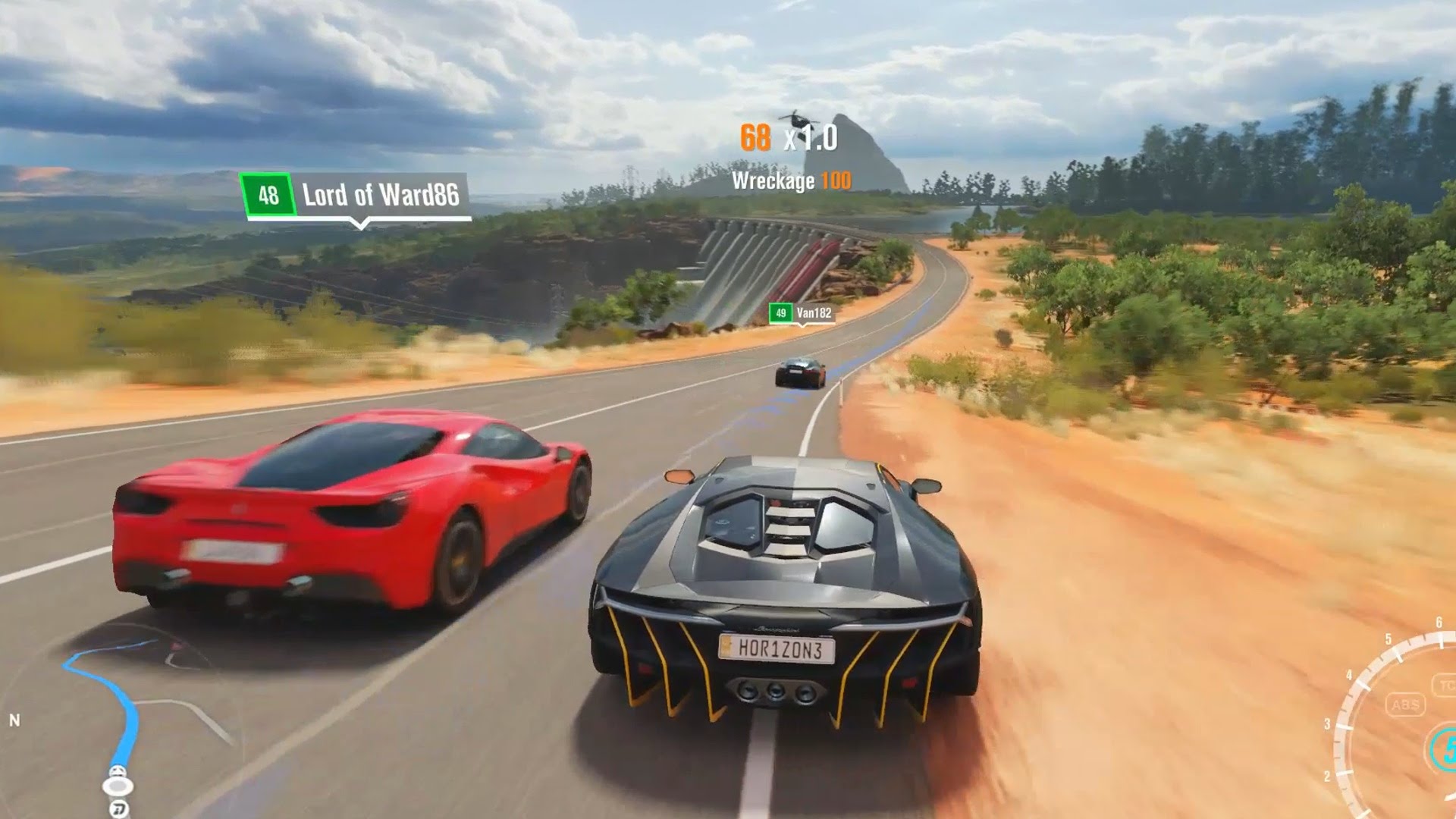 Above: Pretend a T-rex is chasing you.

It’s not just about the singular Forza driving experience, though. The depth of the physics engine means that every car has its own signature personality. While something like a Maserati might feel slippery and dangerous, the 2008 Dodge Viper is grippy and smooth. And getting to pilot everything in that range is what makes Horizon 3 so wonderful.

The Horizon series is best known for its setpieces. These races often have players doing something wild, like racing against an enormous plane or trying to beat a train across a set of tracks. Those events are thrilling and also highly prepackaged to maximize drama.

I love them, and I’m glad they’re back in Horizon 3. But this time around, the developer has unearthed a new event style that complements those choreographed stunts: Bucket List Blueprints.

With Blueprints, Forza hands the keys of creation over to the player. In these event, you decide the type of cars players will use, the objective, the weather, and more. You then get to set the standard for the event to get a barometer of success for others.

I played a Blueprint event early on that required me to drive the unethically quick Ultima 1020 to a distant finishing point in less than 140 seconds without taking any major damage. No matter how fast I rode that bucking bullet down the streets, I was never fast enough … until I decided to take things off road. Once I realized I could shave off a ton of seconds by riding over the grass, which made it much more likely that I would hit a tree or a rock and fail the mission, I was able to finally squeak by the qualifying time.

And what’s great about this is that the person who created that event had to set that time in the first place, and beating their time gave me a huge feeling of accomplishment. 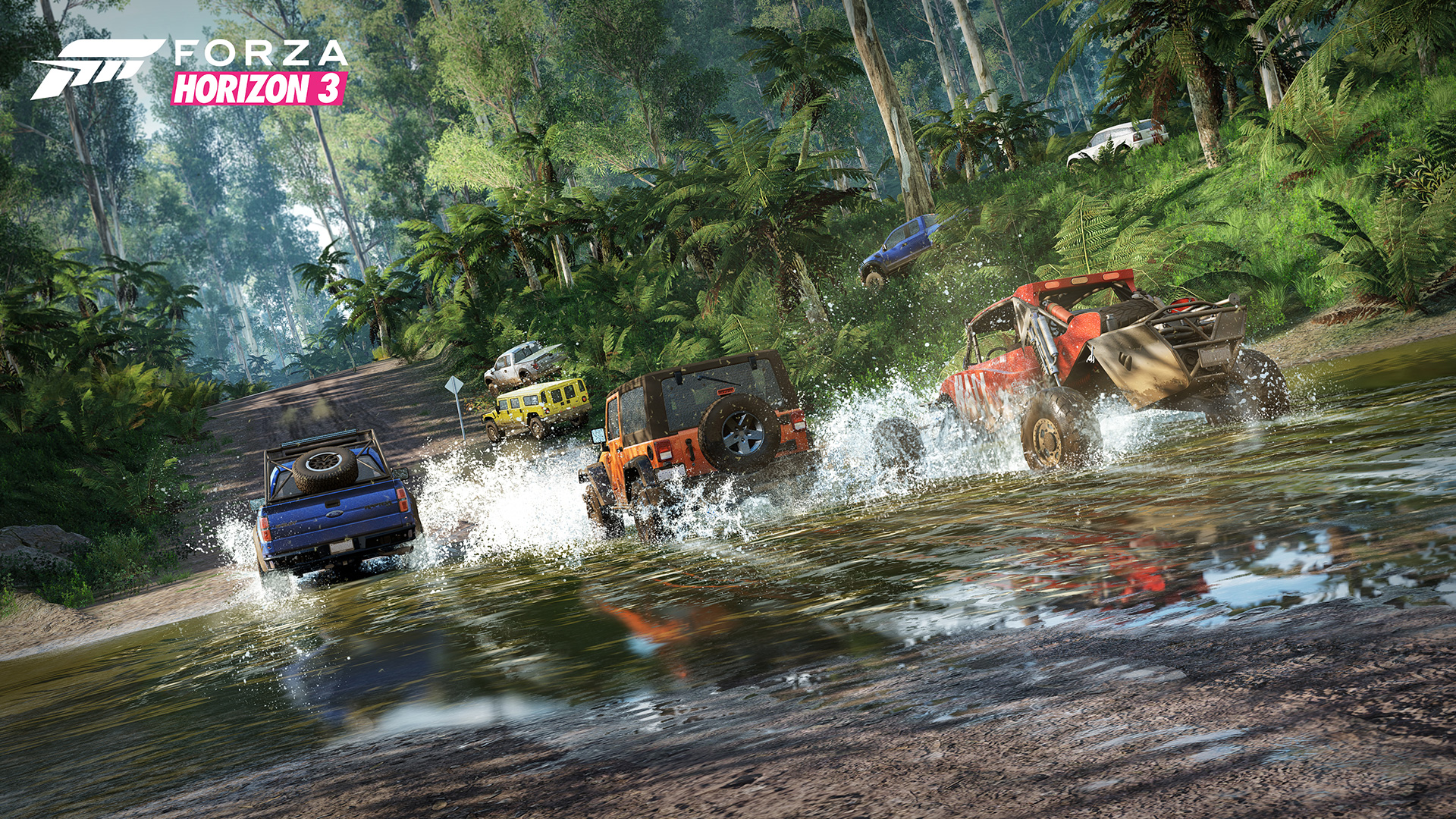 Above: Race through the river.

These events have a lot in common with Super Mario Maker in that you know they aren’t impossible to beat and you’re often playing against the creations of people who you know. It gives Horizon 3 almost unlimited content, and I hope future updates to the game expand this feature even further.

Forza Horizon 3 is gorgeous. The sense of speed will whip your eyeballs into the back of their sockets, and the detail on the cars will dazzle your senses. But it’s Oz that steals the show.

Horizon 3’s Australia is a crisp, realistic look across its downtown, rain forest, and outback biomes. Even as these surroundings fly past you outside your windshield, they still look stunning.

I especially appreciate the environmental effects of splashing your vehicle through a creek. In addition to your car lurching as your tires try to push through the H2O particles, droplets of water spray out and around your car and up onto the camera.

As always, you can expect a lot of social hooks in Horizon 3. Everything has a leaderboard. You’ll always know which one of your friends has smashed more hidden XP billboards and who went through a speedtrap with more velocity. Forza’s Drivatars are also back, and that means you’ll see your friend’s names and driving styles encroach on your space.

All of this makes, in addition to the aforementioned Blueprint races, make for an excellent asynchronous multiplayer game, but Horizon 3 also amps up the cooperative play. For the first time, you can join up with friends to take on the campaign in a co-op mode. You can all explore together and then compete in races and other missions.

Guided experience is occasionally too limiting

Horizon’s only big flaw is that the pacing of the progression sometimes feels busted. To move forward, you’ll occasionally need to beat every race in an area, and that might mean you can’t move on until you beat something you don’t like or aren’t good at.

I put a good half-hour on a drifting zone where I was supposed to use the e-brake to make an offroad truck juke sideways around corners. I’m better at it now, but I would’ve preferred to just skip that mission. I couldn’t, however, because the game wasn’t giving me anything else new to participate in.

Your options open up the deeper you get into the campaign, but it was still a bummer every time I would open up the world map and see only one new event to take on.

Forza Horizon 3 is the supremely polished product you’ve come to expect from this franchise.

It is one of the most feature-rich asynchronous multiplayer games I’ve ever played. I love having all of these ways of competing against my friends, and I think the Blueprint events are a smart way to make the game feel more personal and connected. I plan on making at least a few more missions and sending them to all of my friends after Horizon goes live later this month.

When you combine those elements with the refined physics and retina-burning visuals, you get the king of the racing genre.

Forza Horizon 3 comes out for Xbox One and PC on September 27. Microsoft provided GamesBeat with a download code for the purposes of this review.