Let’s cover the big picture stuff first. Q3 2018 was flat; it did not continue the growth we saw in the previous quarter. Gartner estimates that worldwide PC shipments increased 0.1 percent to 67.2 million units, while IDC counts a 0.9 percent decline to 67.4 million units. Gartner’s top five vendors were Lenovo, HP, Dell, Apple, and Acer (in that order) while IDC’s were Lenovo, HP, Dell, Acer, and Apple (also in that order).

But Gartner also provides a U.S. breakdown every quarter, and Q3 2018 was the first time Microsoft made an appearance, displacing Acer: 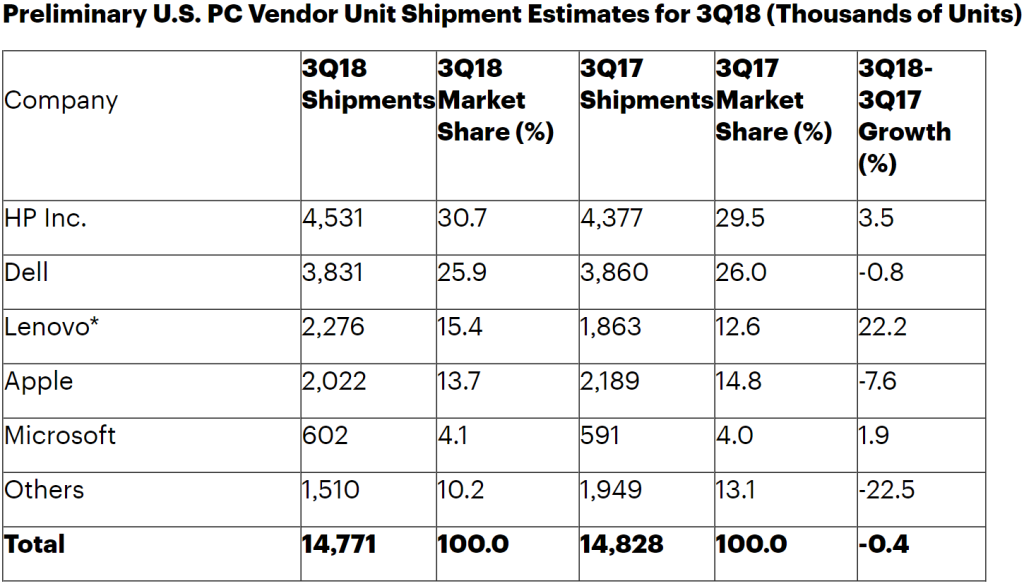 Microsoft is still a far cry from the other players in the top 5, and its shipments were in fact only up slightly, by 11,000 units, gaining just 0.1 percentage points (to 4.1 percent market share). Still, Dell and Apple were down, and the overall U.S. market was flat (down some 50,000 units) in Q3 2018, so in that context, Surface sales are doing just fine.

Surface may be a billion dollar — and growing — business for Microsoft, but it’s still tiny. Keep in mind that Microsoft’s Surface strategy is not at all to become the dominant PC maker. Instead the company has “a rising tide lifts all boats” approach wherein Surface makes Windows look good and helps PC makers innovate.

We’re unlikely to ever see Microsoft as the top PC manufacturer — globally, or in any country. But breaking into the top five in the U.S. six years after the first Surface debuted is nonetheless an accomplishment.