In most postapocalyptic games, you’re struggling to survive. But in Genderwrecked’s world, you don’t face zombies or scrounge for supplies. Your mission sends you on an urgent search for meaning and certainty. You’re seeking a different kind of survival, one of emotional importance that will help you understand yourself and how you relate to others.

Developers Heather Robertson and Ryan Rose Aceae’s visual novel is a journey through a desolate landscape filled with monsters, all grappling with loneliness, self-esteem, insecurities, and that ineffable thing called gender. It’s humorous, defiant in its glibness, and moving in its sincerity. It’s out now on Windows, Mac, and Linux, and even if you’ve never contended with your own gender, it’s a touching story that’s a joy to experience. 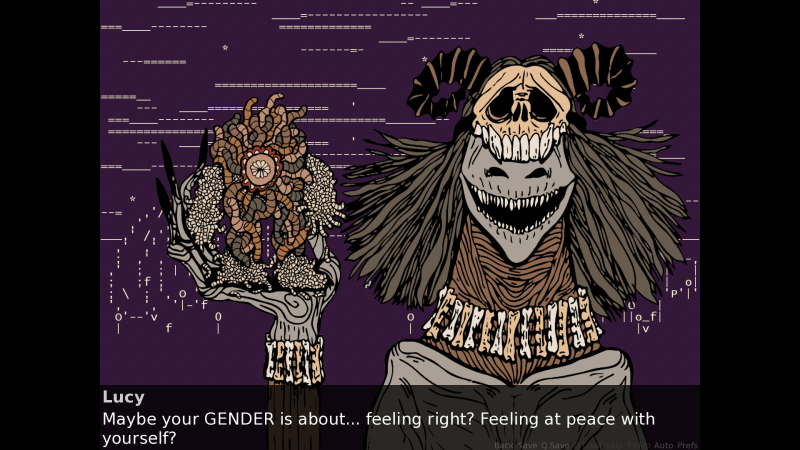 Above: Lucy and Maggie, two girlfriends who support each other.

Genderwrecked has a very cyberspace sense of humor. It speaks a digital parlance that’s born straight out of the mesmerizing garbage fire of social media sites like Twitter. It’s quick with its jokes, which punctuate the dialogue like sharp jabs meant to both tickle your funny bone and to keep you from getting too close. The humor seems at times like a coping mechanism as well as a genuine effort at connection. But when it stops joking around and slows down so you have a moment to listen to the characters’ stories — that’s when the magic really happens.

At the outset, you embark on a quest to learn about gender. Some of the folks you encounter on your journey are willfully obscure, speaking (sometimes literally) in riddles and referencing interstitial space-time and the gravitational pull of heavenly bodies. Their emotions are shrouded in metaphors, allusions, and stream-of-conscious philosophizing that suggest that maybe they’ve been alone for far too long. Despite all this, you’ll always get a glimpse of what they’re going through — sometimes loneliness, an urge to connect with people yet an aversion to vulnerability and the compromises that accompany messy, human relationships.

Because the dialogue is generous with humor and all-caps cosmic horror, it feels all-the-more precious when characters confide in you. For instance, you encounter two girlfriends, Lucy and Maggie, who are straightforward and say exactly what they mean. And when Lucy tells her story, the game doesn’t try to distract you with linguistic sleight-of-hand. It doesn’t wave around puns or tongue-in-cheek jokes. It simply lets her talk, and her words slice through with a clarity and sincerity that’s beautiful and heartbreaking. 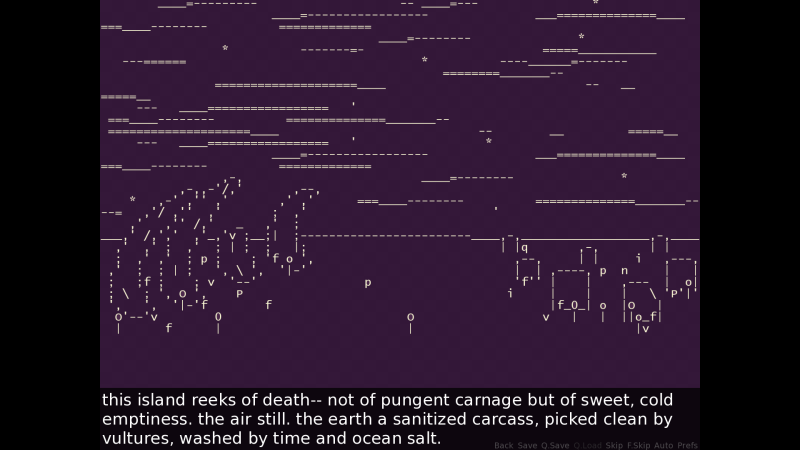 As I wandered the somewhat hellish landscape of a world decimated by forces unknown, I was struck by how stark yet beautiful it was. I’m a sucker for ASCII art, particularly the way it can suggest a shape with just a perfectly placed ampersand, and Genderwrecked’s background art is studded with cryptic symbols and morse code dashes. It leaves you to decipher the world on your own, letting you fill in the spaces with just a few lines of description to go on.

In sharp contrast, the characters are hand drawn monsters, fully detailed and meticulously colored. I admired the tiny segments on Maggie’s maggot-ridden body, even as I felt a little queasy because bugs are one of my personal weaknesses. Jolene the screaming tree is scrawled with bold lines and splotches of colors contrasted with sharply defined teeth and the careful curve of a lashing tongue.

Genderwrecked’s art sometimes reminded me of underground punk zines — tiny magazines printed in someone’s basement, filled with weird artifacts and graffiti-esque art. Though it doesn’t capture that aesthetic, its spirit feels related in attitude and personality. 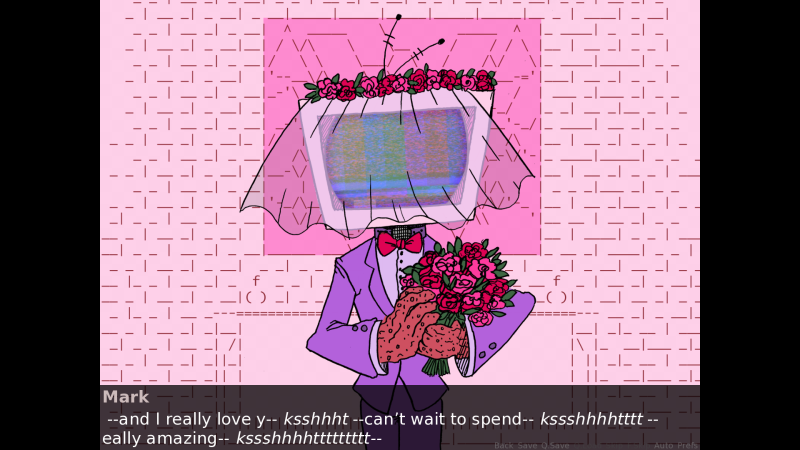 Above: Please meat my robot dad husband, we are very much in love.

The postapocalyptic landscape isn’t teeming with characters, but the ones you meet are memorable. You’ll encounter Lucy and Maggie, of course, who are made respectively of bone and wriggling maggots. You’ll answer riddles from Phantasmos, of dreams and nightmares, mystery, phases, unbeing and being again — or Fanny, for short. If you want, you can marry Mark, the rad bot with a dad bod, who’s fathered 159 boys made of ground meat and has a penchant for terrible puns. And a pseudo-intellectual tree will yell at you in all-caps then ask you a little shyly for your opinion.

Later on, you’ll learn more about some of these characters. But even those who don’t get as much backstory are fully realized people with hopes and dreams (even if some of them don’t have lips or feel sensation). Whether it’s because of their quirks or a line of dialogue that strikes you, it’s going to be hard to forget them. 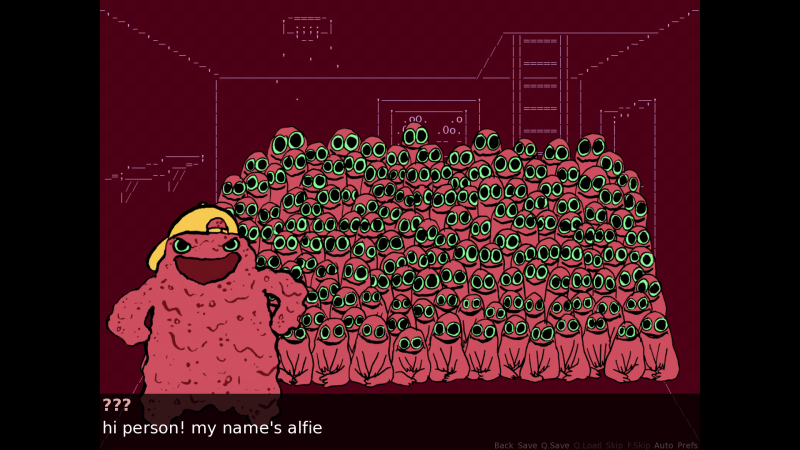 Above: These meatboys are very good.

Genderwrecked trades quips at a lightning fast speed when more than one character is on the screen, bouncing jokes off of each other at a rate that can be a little dizzying. This works for the most part, but occasionally the jokes fell flat.

One specific example is a brief gag about Alfie’s name and how his brother, Craig, deliberately mispronounces it. It seemed too easy and unnecessary, especially given how lovable the meatboys were on their own. Fortunately, that segment was over quickly, and it didn’t detract from the overall story. 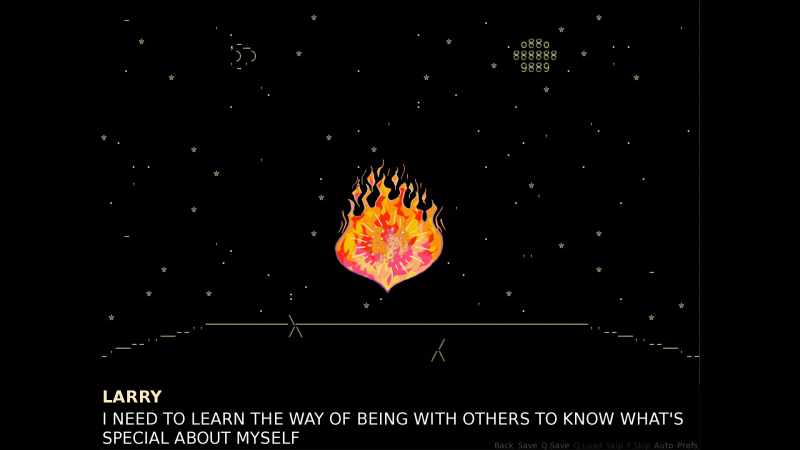 In an interview, Robertson and Aceae told me they made a deliberate decision against creating an “educational” game about transgender issues. They wanted to make something that reflected their own experiences and the stories of those in their lives. By shedding the pressure to show players a “perfect representation” — if such a thing exists — they’ve created something that’s genuine and heartfelt.

All the actions you can take in the game involve other people, whether that’s talking to them, kissing them, or fighting them. You can be confrontational or receptive, you can learn about their ideas. You may never really complete your quest to define gender per se, but you learn about how important it is to be in a community of people you can engage with about these topics.

Toward the end, Genderwrecked drops its pretenses and casual memes. I almost felt like it was rewarding me for making it so far — like it trusted me enough now to show its emotional core. It exchanges its flippant jokes for an earnest dialogue about how messy it can be to unravel the threads of identity, to figure out who you are when you’re not backed in a corner by external forces and oppressors. And it reassures you that it’s OK to not know, it’s OK to be considered monstrous by those who don’t understand.

There will always be people out there who do.

Genderwrecked is out on January 18 for Windows, Mac, and Linux. The developer sent us a code for review.