If the 2018 Electronic Entertainment Expo trade show last week had a one big trend, it was people standing on stage saying “and no loot boxes!” After Star Wars: Battlefront II and a number of high-profile missteps, loot boxes are fading away. They may stick around in a few games, but developers are looking for what’s next when it comes to generating revenue in games — and it turns out that Epic Games and Fortnite already has the answer.

Premium progression passes are coming to PlayerUnknown’s Battlegrounds and Rocket League. The Battle Pass is a $10 digital punch card that enables Fortnite players to unlock cosmetic items by completing challenges and leveling up the pass. You can do that by playing the game a lot, or you can pay to buy some levels for your Battle Pass if you’re short on time. This is a popular concept that we’ve seen before in Valve’s Dota 2 with its annual Compendium progression pass that it launches in the lead up to The International esports major.

The basic idea of the progression pass is that you pay to enjoy a more rewarding meta progression that carries over from one match to another even if those matches are distinct and separate experiences.

And it turns out that this is an effective way to generate a serious amount of cash. In April, when Epic launched a new season of its game with a new Battle Pass, it generated approximately $300 million in revenues, according to research firm SuperData.

If you’re wondering why these progression passes are so effective, you don’t have to search too long. In fact, we’ve seen addictive qualities of leveling up a character in a competitive online game since at least Call of Duty 4: Modern Warfare in 2007. The idea of working toward a larger goal that reaches beyond the confines of a single match is something that we know keeps players coming back for hours and hours. Valve figured out that people would pay for that progression in a free-to-play game, and Epic decided to turn it into a regular product that would launch multiple times throughout a year.

Now, developers PUBG Corp. and Psyonix are looking to adopt their own versions of the Battle Pass, and you may think that this is all about making money — and, of course, that’s a huge part of it. But this is about player retention. Some developers I’ve talked to recently tell me that players tend to choose the games that have progression passes over games that don’t. I’ll admit that I’ve been thinking about buying these passes and getting back into both PUBG and Rocket League all day today, and I haven’t played either for any real stretch of time in weeks.

“Outside of Fortnite: Battle Royale, Dota 2 is another game that uses a battle pass monetization strategy and arguably the originator,” SuperData Research analyst Reggie McKim told GamesBeat. “When a battle pass is for sale, total digital revenues for Dota 2 almost triple month-over-month, for every year so far.” 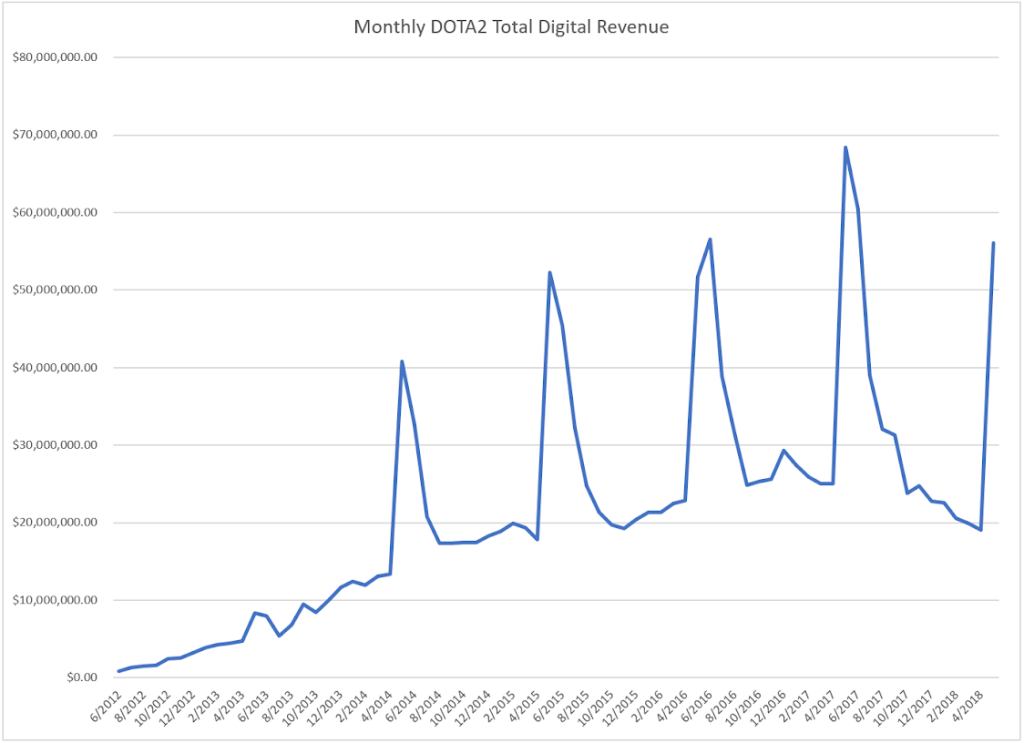 Above: Dota 2 revenues spike with the Compendium each year.

“By buying a battle pass, consumers have an incentive to become more engaged with the game, as playing more means more levels on your battle pass which means more cosmetics items,” said McKim. “Consumers are also incentivized to level their battle pass up to the highest level possible because the game will place more attractive items towards the higher levels of the battle pass and the higher level items tend to be less common in-game. The level-100 Fortnite battle pass skin can be seen as a badge of honor, for example.”

So the progression pass is working for Fortnite. And Psyonix and PUBG Corp. (and a million other developers) have likely considered something like this before. Everyone pays attention to what Valve does with Dota 2, and everyone understands how lucrative the Compendium is for that game. So why didn’t we see the progression pass in PUBG or Rocket League earlier? I think one reason is that some developers believe selling progression to players is even more cynical than loot boxes.

Designers have spent the last decade-plus building the perfect digital Skinner boxes. Video game developers have a frightening understanding of how to dole out glitzy rewards to you to keep you coming back to play a game more. But developers have almost always kept the Skinner box one step removed from revenue. For example, you level up a character and get rewards to keep you coming back, but the studios use that engagement to then get you to buy loot boxes. That’s not great. It has its problems. But it’s different than letting people pay for the Skinner box itself. I don’t know if it’s worse or more destructive or anything like that, but I’ll just say this:

I won’t be surprised if E3 2023 rolls around and the new trend is: “no more progression passes!”