When The Witcher 3: The Wild Hunt launched in 2015, its stunning, well-realized world, rich characters, and compelling quests led to it being hailed as one of the greatest RPGs of all time, but nestled inside Geralt’s epic adventure was an entirely different game: Gwent.

A mini-game played by almost all of the game’s denizens, Gwent sent players all over the fantasy world in search of competition and new cards with which they could beef up their decks. It was surprisingly elaborate and boasted a multitude of gorgeously illustrated cards, and it proved to be rather addictive. So much so that developer CD Projekt Red decided to spin it off into its own standalone title, Gwent: The Witcher Card Game.

You could be forgiven for assuming that CD Projekt Red’s task was a simple one; after all, the game already existed, and it had been playtested by millions. Detached from a single-player RPG, however, Gwent became a very different game, and that made the task considerably more complicated.

“These are different games and, as a result, the process behind designing cards for each one couldn’t be more different,” senior game designer Michał Dobrowolski explains. “Gwent in The Witcher 3: Wild Hunt was designed to reward players for exploration and completion of their card collections—the more cards they would acquire, the better their decks would become. We didn’t need to focus so much on the balance of it because The Witcher 3 is a single player RPG and you’re the protagonist of the story. Winning games depended on your progression in the game. Plus let’s face it—when you’re playing as a professional monster slayer for hire, you’re kind of expecting to be able to win against a simple merchant or blacksmith at a game of cards.”

In the standalone version, balance and fairness become two of the most important concerns. Players aren’t competing with NPCs, they’re competing with other players. So CD Projekt Red needed to reconsider even the basics, “taking the core of how Gwent played in The Witcher 3 and building Gwent anew on top of that.” Many of the fundamentals remain, if not the same, but they’re accompanied by brand new game modes, extra cards, and new abilities and mechanics.

The art underwent a lot of changes, too. The Witcher 3’s cards contained static illustrations that represented the core idea of the card, what it did, but no more than that. It made sense in a game where the card game was far from the focus. In the standalone, it’s everything.

“When we started working on standalone Gwent,” says Katarzyna Redesiuk, associate art director, “we knew cards were going to be the main focus of the game this time around, so we wanted each one to be able to tell a story and allow the viewer to learn about the characters and the world around them by looking at the illustrations alone. Our artists put in a lot of effort to portray details through actions, gestures, expressions, even symbolism. Every card also has a fully animated version containing additional sound effects, which allows us to even go beyond the frame with each card’s tale.

“Art doesn’t always perfectly portray the abilities of a specific card, but that was a conscious choice made to give the designers more freedom in case they’d like to change something later on in the design process. We do, however, try to follow the rule of making cards that have debilitating or damage abilities look more menacing, and the healing and empowering ones more friendly.”

A card is born

When it comes to designing a card, the team usually starts with a character or an item. The artists get a brief that contains all the details about the character or item, from how they look, to what stories or quests they were in. These could come from the games, but also the books or things that were implied in conversation or letters. While that’s happening, the team is also coming up with mechanics that fit the card’s personality.

Dobrowolski uses Roach, Geralt’s willful steed in The Witcher 3, as an example. “She became so iconic for acting out and being weird that it was super important for us to convey that through the card’s ability in Gwent. That’s why, if you have her in your deck and play a gold card, Roach is going to hop onto the board and set up camp in a random row.”

“This is also something you can see with her card art,” Redesiuk adds. “Roach is standing there on a roof of a house, which happened a lot in The Witcher 3. But we really wanted to go all the way with this theme in the card’s animated version, so there are a lot of deliberate visual glitches. She ends up flying high in the sky and getting stuck on a tree at one point. I really think our animators did a really great job with the card.” 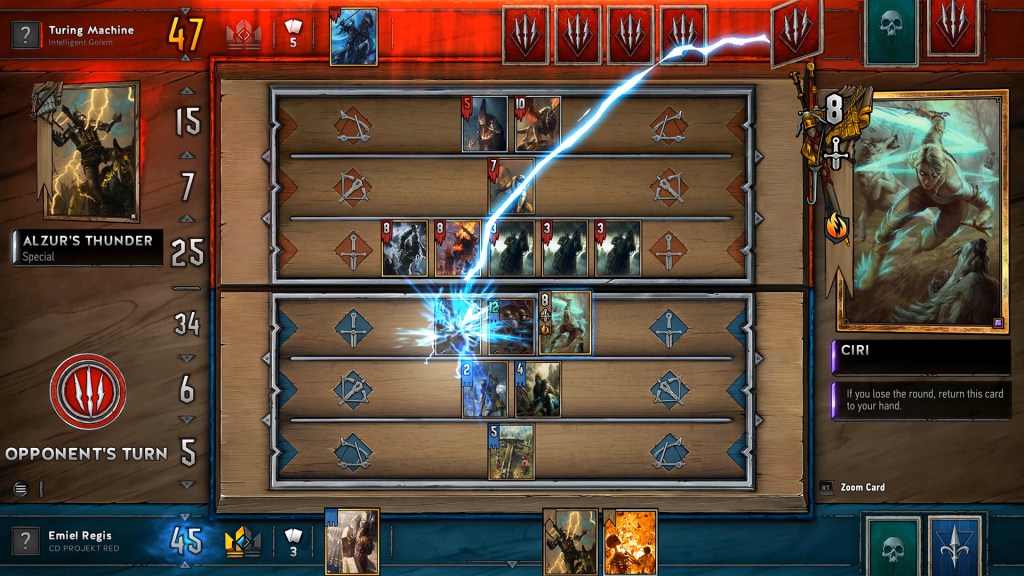 So despite being detached from the single-player experience that spawned it (though it will eventually contain a single-player campaign, Thronebreaker), Gwent is still obviously inextricably linked to the world of The Witcher, in particular The Witcher 3. Plenty of familiar faces return in card form, though some have posed a challenge for the team in regards to how they express and really capture a character with only an image and a brief bit of text. Redesiuk recalls Johnny, the mischievous godling, being particularly tricky.

“Redeiuk is an important character in one of the more prominent questlines of The Witcher 3 and a community favorite because of how funny and inappropriate he was. It was a real challenge to showcase his character without using words. Our wonderful artist, Marta Dettlaff, decided to illustrate a scene that was only described in one of the dialogues. According to Johnny, he saw an ashen-haired woman that Geralt is looking for as he was taking a glorious morning poop. Despite the crudeness of the situation, Marta not only managed to make the illustration whimsically charming, but also have it convey a lot of character using Johnny’s facial expression.”

Cards that are part of a set, like a faction, require a slightly different approach. As well as building abilities around a card’s personality, CD Projekt Red has to ensure that it has synergy with the other cards in the set. That means, Dobrowolski explains, that the team sometimes has to look past the individual personality or archetype of a card. In other cases, cards were created to do a specific job or fill in a gap, making sure that each faction has parity.

Faction design starts with gameplay pillars that fit with their art and personality, which are then built on top of and improved or tweaked through playtesting and throwing new ideas around. Skellige, for instance, is built around their lack of fear, even of death, and love of fighting—often in foul weather, considering their wet and wind-battered homeland. All of these elements were expressed in The Witcher 3, and in Gwent they are transformed into mechanics. So the Skellige faction is all about sending units to the graveyard and then bringing them back, stronger than ever. And the more hurt Skellige cards get, the more riled up they get. They’re stronger in fog, too, reflecting the fact that they aren’t fair weather fighters. 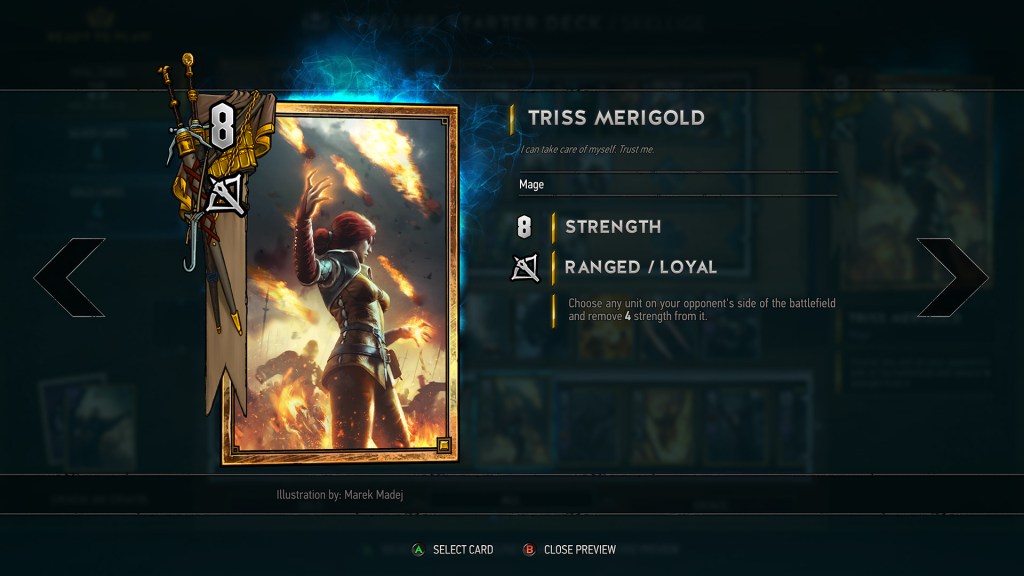 Since players can construct their own deck builds, it’s not enough to make sure there’s balance and synergy within a faction—CD Projekt Red has to take a more holistic approach. “When balancing cards, we have to and always do look at the game as a whole,” says Dobrowolski. “There are ways to get any faction’s card into another faction’s deck during gameplay. The Operator card’s ability is just one of a number of examples to do so. Under specific circumstances, this card allows you to create a copy of a unit from your hand for both you and your opponent. This means that if you’re playing Northern Realms, you might end up with, say, a Nilfgaard card.”

Even after all of this, there’s still a chance that the card will be scrapped or taken back to the drawing board. The team does a lot of testing throughout the development of a card, culminating in playtesting being done by the QA department, who put every card through its paces, pitting it against other cards in a variety of scenarios. Everybody needs to be able to find a way of using every card in a deck, says Dobrowolski. And clarity is almost as important as the mechanics.

Gwent is meant to be the kind of game you can pick up in 15 minutes. Everything has to be easy to understand, or at least be clear. Entry level cards, for instance, are typically accompanied by a concise single sentence explanation that a novice can immediately grasp. Higher tier cards, however, or ladder cards, are only restricted in terms of balance and can be a bit more complex. CD Projekt Red has also added a few ways for new players to be eased into the battles.

An interactive tutorial kicks things off, and then there are leader challenges that let players earn more of the powerful leader cards. There are starter decks, too, one for each of the five factions, and they can be modified once players become more confident and want to experiment with new cards and abilities. Even the in-game holidays can help teach players.

“We recently started doing special in-game holiday events,” explains Dobrowolski, “like the Mahakam Ale Festival and Saovine, which, despite twisting the game’s rules a bit, can help you get your head around important elements like maintaining board control. We’re still in beta, so obviously this is something we’re continuing to work on, with the goal being to make the game even more accessible to new players.”

If there is a downside to the process, a negative side effect of the balancing and playtesting, it’s that the crazy, out-there decks built by CD Projekt Red never get to see the light of day. “As soon as one of us comes up with something really crazy,” says Dobrowolski, “it usually ends up being too powerful and we start balancing it to hell and back.

Gwent: The Witcher Card Game is in open beta now.