Lawrence Lessig has spent his career studying constitutional law, and he has been helping new democracies to form the legal frameworks for governance. Now he is lending his expertise to Berlin-based independent game developer Klang to build the political framework for the upcoming massively multiplayer online game Seed.

While many games pay special attention to in-game economics, the politics, or a system that enables players and developers to govern the virtual world, have often been ignored. Klang hopes to differentiate its game through the political system, and that’s why it tapped a top legal mind to design the game’s political framework.

Seed is an online multiplayer world that will also have a lot of artificial intelligence, and it uses the SpatialOS for cloud games from Improbable, an online games infrastructure company that recently raised $502 million from Japan’s SoftBank. Klang itself has raised an undisclosed amount of money from Greylock Partners, MIT Media Lab director Joi Ito, and Unity founder David Helgason. 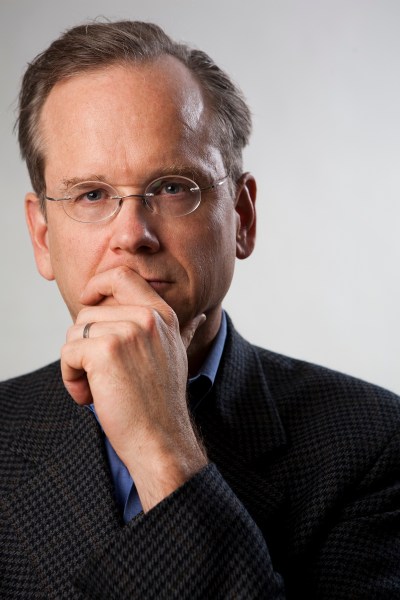 “After talking for a while, we moved on to how they were going to govern these places, the structure for governing,” Lessig said in an interview with GamesBeat. “It was clear that no one had really thought through that much. That’s what began our conversation about whether there was something fun to experiment with here.”

Seed is a continuous, persistent simulation where players are tasked with colonizing an exoplanet through collaboration, conflict, and other player-to-player interaction. Using unique gameplay based on managing multiple characters in real-time, communities are built even when players are logged off, allowing the world of Seed to be a living, breathing entity.

“We’re building a virtual world filled with vast, player-created communities where every player-action has a repercussion in the game world,” Vondi said in a statement. “For example, a player might chop down a tree, which affects the planet’s ecosystem. This wood can then be sold on, which has an impact on the economy, and if the player chooses to, use the money to bribe another player, which affects the balance of power. We create and provide the tools and incentives to build these communities…the rest is up to the players.”

Also joining Klang and Lessig on the project is the renowned 3D animator, Eran Hilleli, who will be leading the art direction of Seed. Working on a variety of projects, Hilleli has earned acclaim for his signature art and elegant animation style.

Klang will use the money to grow the studio and complete the development of the first internal release of Seed. The previously mentioned investors also join Klang backers London Venture Partners (LVP), and Adalsteinn Ottarson (Riot Games).

“We’re extremely proud to have the backing from some of the best investors. This funding, along with their valuable experience, will be crucial to making this project a reality,” said Vondi.

Klang can build Seed to accommodate a massive number of players because it leverages Improbable‘s SpatialOS, an operating system for cloud games that enables massive simulations such as virtual worlds at a far greater level of scale and complexity than previously possible.

Along with that, the game will have a unique political structure.

“Obviously the game they’re building isn’t a governance game, but what everyone realizes is that, especially when you invest such an incredible amount of your time and energy into building places for playing a game like this, you need some confidence about how the place will evolve,” Lessig said.

He added, “What we’ve been talking about are ways to give people in the game options for how they’d like that governance to happen. The options range from the simplest, most minimal—basically, from as little government as possible, to things like monarchy or different forms of democracy. You can randomly select people for office. We want to enable, in the lowest-cost way possible, the lowest number of cycles, to enable these different options, and see how these worlds evolve. Which ones work well? Which ones cohere with the kind of gaming that’s happening?”

Klang plans to start opening up an external playable version of Seed in early 2018. In the meantime, MMO fans candiscover more about Seed via the project’s website: seed-project.io.

Lessig is the Roy L. Furman Professor of Law and Leadership at Harvard Law School. He is a member of the American Academy of Arts and Sciences, and the American Philosophical Association, and has received numerous awards, including the Free Software Foundation’s Freedom Award, Fastcase 50 Award and being named one of Scientific American’s Top 50 Visionaries.

Vondi founded Klang in 2013 as an independent game development studio in Reykjavík, Iceland. The company moved to Berlin. Its other founders include ex-CCP Games developers Oddur Magnússon and Ívar Emilsson. In 2016, the company launched the mobile game ReRunners: Race For the World for iOS and Android.