Blizzard Entertainment announced the next expansion for Hearthstone during its BlizzCon event today in Anaheim, California. It’s called Rastakhan’s Rumble, and it launches on December 4 on PC and mobile platforms.

Hearthstone is the king of the digital card game market, with intelligence group SuperData estimating the free-to-play game will bring in $414 million in revenue this year. Hearthstone makes most of its money by selling digital card packs to players, and expansions mean that people will have new cards to buy.

This is the third and final expansion or the Year of the Raven. Hearthstone has rotation cycles. At the start of a new cycle, older expansions are rotated out of the Standard format. This makes it easier for newer players to get into the game without having to buy card packs for older expansions, and removing all of those older cards can give the newer sets more room to flourish. If you want to play Hearthstone with every card, you can try the Wild format.

Rastakhan is the king of the Zandalari trolls. He’s an important character in the current World of Warcraft expansion, Battle for Azeroth. He’ll even be a boss in the next raid. This new Hearthstone expansion will focus on trolls and their gods, the Loa. Each of the game’s nine classes will have a new Legendary card based on a troll champion. Each class also get a Legendary based on a Loa.

The expansion will also add a new solo mode, Rumble Run. You choose one of the troll champions and climb the ranks of the Gurubashi Arena. If it works like Dungeon Run, the single-player mode for the Kobolds and Catacombs expansion, you start with a small deck of cards and then add more to it after each victory. These are engaging modes that don’t require a player to have an extensive collection of cards, as Constructed play does, and if you meet all the challenges, you can earn a special cardback. 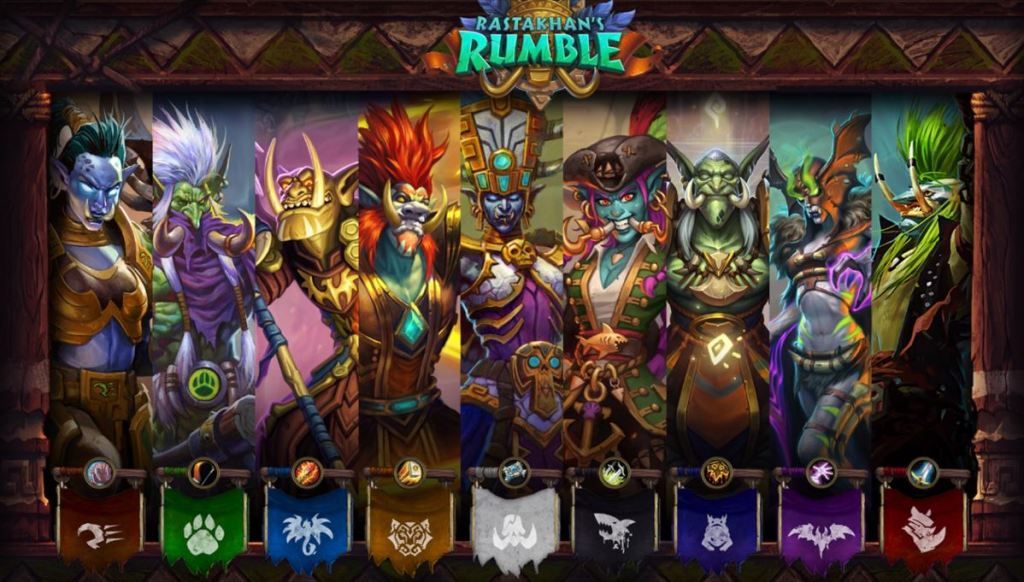 Above: The Arena champions.

Hearthstone has long been the king of digital card games, but it will get some new competition soon. Valve’s Artifact comes out later this month, and Magic: The Gathering Arena is in beta.

This expansion adds a new keyword, Overkill. If you kill a character with a card with Overkill, you can earn an extra ability. As an example, a weapon could attack again.

Blizzard is offering two different preorder bundles for Rastakhan’s Rumble: a 17-card pack (The Challenger’s Bundle) with a special cardback, and a 50-pack Rumble Bundle that comes with King Rastakhan (a Shaman hero).