Blizzard Entertainment announced Wednesday that it would make a change to one of the most controversial cards in Hearthstone: The Caverns Below, the Rogue Quest card from the Journey to Un’Goro set. The studio felt players were achieving the quest too quickly, earning a powerful reward that was impacting the card game’s balance.

In the release, the Team 5 development group (which works on Hearthstone) said that “The Caverns Below is uniquely powerful versus several slower, control-oriented decks and played often enough that it’s pushing those decks out of play. This change should help expand the deck options available to players both now and after the release of the next expansion.”

I asked principal game designer Mike Donais to further explain why they made the change, which will require players to play a minion with the same name five times, not four as it does now. I noted that for almost every other class quest, players had to play six or seven cards — with the exception being the Druid’s Jungle Giants, which requires that you play five cards that with 5 or more attack (and these are usually mana-rich cards to play, so it’s harder to pull off).

“We felt that increasing the number of times you needed to play a minion with the same name by one was enough of a change,” Donais said. “With this change, people won’t complete the quest more often, and if they do complete it, it will come later in the game so the opponent has more time to react to it.”

But I asked what’s really the difference between a skilled player (or one drawing well) pulling off the quest on Turn 5 or Turn 6 instead of Turn 4 or Turn 5. Donais said that the change alone will result in fewer players exploring The Caverns Below.

“I think you will find that after the change there are a lot less people running Quest Rogue. The ones who are doing it is because they love the playstyle or because they are specifically trying to counter slow control decks,” he said.

While the Caverns Below quest is annoying, it’s not that hard to handle when you’re playing against it. The best option is to just kill your opponent before they complete the quest — since they’re focusing on bouncing minions from the board and back to their hand, they often don’t have the flexibility to answer your plays. 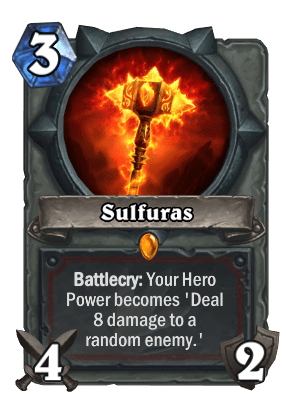 Above: Sulfuras is the reward for the Warrior’s Fire Plume quest.

But the one quest that I’ve seen draw hate not just from amateurs but the professional scene is the Warrior’s Fire Plume’s Heart quest, where you play seven minions with Taunt (a sort of shield effect for your minions and hero) to get Sulfuras, which gives you “DIE, INSECT!” as your hero power — you get Ragnaros the Firelord’s 8-damage fireball. The issue is that Ragnaros rotated out of the Standard side of Hearthstone, but this quest brings his power back. It’s frustrating to play against, and when you take the Warrior’s capability to clear the board of opposing minions, it can feel overpowered.

But Donais said that they got more negative feedback about the Rogue’s Caverns Below quest.

“We have seen more feedback on the Rogue quest from various sources in the community and from many different types of players. If other quest decks or really any decks cause big problems, then we will also address those as needed,” Donais said. “Right now the meta is very balanced, so we are very happy with how Un’Goro is doing.”

Just how balanced is it? I saw a couple of different new deck styles, like Jade Elemental Rogue and Elemental Token Druid, make Legend rank within the last week. It’s rare that, this late in an set’s meta, that new decks pop up.

“The meta is usually really fun when a set first comes out as new decks are popping up and lots of experimentation is happening. Having that still happen this far into the expansion is awesome to see,” Donais said. “I was happy to see the mage quest, Open the Waygate, show up in the Seatstory cup last weekend and win some matches. Hopefully, as new cards are released in future expansions, people will go back to the quest cards and experiment with them more using those new cards.”

Now, if only my C’Thun Elemental Rogue would only crack Rank 14. …