The people who make hit movies or top-40 songs often have a gift for predicting what new types of experiences audiences are looking. Video games face a similar challenge, but game publishers also have to struggle to figure out the future of how consumers will want to play that content.

What’s bizarre is that one Square Enix studio has figured out what’s next for engaging audiences with single-player campaign-based releases, and its reward for making that discovery? Well, it’s up for sale.

Square Enix announced earlier this week that it is looking for buyers for Hitman studio IO Interactive. The publisher reported “record high” sales for its fiscal year 2017, which ended March 31. It credits Final Fantasy XV and Rise of the Tomb Raider on PlayStation 4 for the strong results, and the company failed to mention Hitman (the 2016 reboot) at all in its earnings press release. Gaming, of course, is a hit-driven business — especially for publishers dealing with blockbuster-level budgets. If Hitman wasn’t a massive financial success, it makes sense that Square Enix wants the studio off its books. But in the process, the Japanese publisher is losing one of the smartest development studios in the industry.

At its core, Hitman is the most refined version of the franchise’s base mechanics where you guide a stoic murderer-for-hire through a simulated city block or fashion show while looking for your assassination targets. But more than any other game before it, it realizes how to turn a single-player experience into a live gaming service that you would want to revisit regularly. Instead of releasing Hitman as one, complete experience on a disc from the start, the company decided to go with an episodic model. IO released a new map every couple of months, but between those drops, the developer would constantly refresh the existing stages with new challenges, missions, and other kinds of free content. 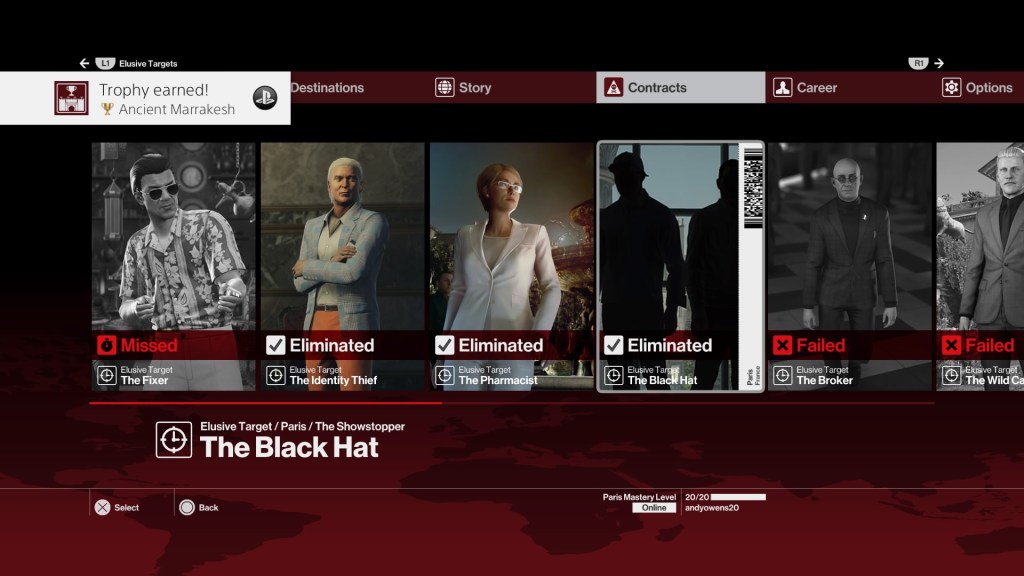 Above: A list of Elusive targets that appeared in Hitman over the last year.

When I spoke to IO Interactive creative director Christian Elverdam in March about Hitman’s disc release, he touched on how this is different than a strictly “episodic” model.

“There’s a bit of a distinction in that we have content every week for a year,” Elverdam said in March. “There’s always something happening — whether in the form of challenge packs, contracts, elusive targets — all this stuff I see as things that fit into a live game. Whereas the episodes are just bigger content drops.”

What makes this revolutionary is that it proves this model of development not only works in a traditional solo play experience, but it also makes it better. As an example, Hitman has its main story missions, which can give you a really easy way to learn the levels. You can save and load at any time, which makes for a low-stakes challenge. But IO would also regularly push out Elusive Targets, where you would have to track down a random character who doesn’t show up on your map, and if you fail you don’t get another chance. You also can’t save or load in this mode, which gives you an opportunity to put all of your knowledge from playing the other, easier modes to use in a much more tense version of the same stages.

If IO did not release Elusive Targets once every couple of weeks, the core Hitman levels would feel cheap and lame. But using the standard missions as a launching point for a harder version of the game that pops us as a limited-time challenge, makes it so that you are always working toward something.

This is the future of single-player games.

We’ve had live services in multiplayer for years, and regular content updates is something that a company like Blizzard has turned into a major feature for its Overwatch shooter and its Hearthstone digital card game. It’s also a part of what makes a game like Bungie’s online cooperative shooter Destiny so sticky for so many people. You start a game, and you come back daily or weekly to participate in events or to get certain items.

Using this model, IO Interactive could have eventually built a Hitman that is around forever with no need for further sequels. The studio was planning season two, and I was fully looking forward to getting back into my habit of maxing out my mastery level in each stage and then hopping on a handful of the live challenges while waiting for a new Elusive Target.

Compare that to Final Fantasy XV, which was the fastest-selling game in the franchise’s history. That’s an incredibly impressive feat — especially for a series that has sold well for decades. But Final Fantasy XV is going to disappear from our active, daily lives soon. Square Enix developed the game over the course of an entire decade, and it is going to have a flash of success that will fade away quickly. Like other blockbusters, it might get another blip on our collective radar with its downloadable content, but it won’t engage a significant audience as part of an ongoing service the way something like Clash Royale does.

And the success of Overwatch and free-to-play mobile games suggests that a huge audience loves engaging with a live experience on a long-term basis instead of jumping from one release to the next.

So, why didn’t Hitman do better? Well, it was too early to answer this. Hitman was an experiment, and no one knew if it would work. Now that we know it does, several studios will probably follow its lead in the coming years. And developers that stand on IO’s shoulders can also spend time figuring out ways to maybe make their games better financial bets for publishers like Square Enix.