It’s been more than eight years since Andrew Hussie first created his sprawling, self-referential, surreal webcomic Homestuck. By the time it ended on April 13, 2016, it had captured the hearts and imaginations of what felt like the entirety of the social media site Tumblr. It inspired cosplayers, fanart, and fan videos, and it once crashed Newgrounds because over a million people swarmed to view Hussie’s upload of a single-page update. Suffice it to say, its fanbase was massive.

Occasional hiatuses and “gigapauses” punctuated its run, and in the midst of all that, Hussie launched a Kickstarter campaign in 2012 for a Homestuck video game: Hiveswap. It raised nearly $2.5 million. Its developer is What Pumpkin Games, and now it’s finally here.

I don’t know much about Homestuck. I know that it exists, like I know oxygen is real. I always viewed it as kind of an inescapable force of nature on the internet — it was always just there. With Hiveswap, I decided to give its video game incarnation a spin. And if that’s anything to go by, I can understand why it’s developed a massive fanbase.

Cool teenagers who are not greeting their fellow children

Most of the time, teenagers come across as a little hokey in video games. There’s a lot of “Rad!” and “Totally!” and “The bomb dot com!”s. Hiveswap, on the other hand, nails a pop culture-y personality and teenaged attitude that somehow feels really genuine to me, a 31-year-old.

The protagonist is Joey Claire, a 14-year-old aspiring vet with a chip on her shoulder about her absentee dad and a love for tap-dancing. The quirky cast is rounded out by Jude, her conspiracy-nut younger brother who’s obsessed with The X-Files. Later on, Joey meets Xefros, a good ol’ red-blooded alien butler with mild psychic abilities that enable him to bend spoons — but more on that later.

Early on, Joey and Jude trade witty barbs over their walkie talkies, and it’s just really fun to read. They react pretty differently to eyeless alien blob monsters suddenly attacking their home. Jude goes into red alert and babbles on about “psy ops” and “cryptid vanguards.” Joey thinks, “I really should write in my diary so if I die and they find my mangled body, they’ll know what happened to me.”

The characters are fun and likable, and it has a goofy sense of humor. It breaks the fourth wall, doesn’t take itself too seriously, but doesn’t shy away from moments of actual emotion either. 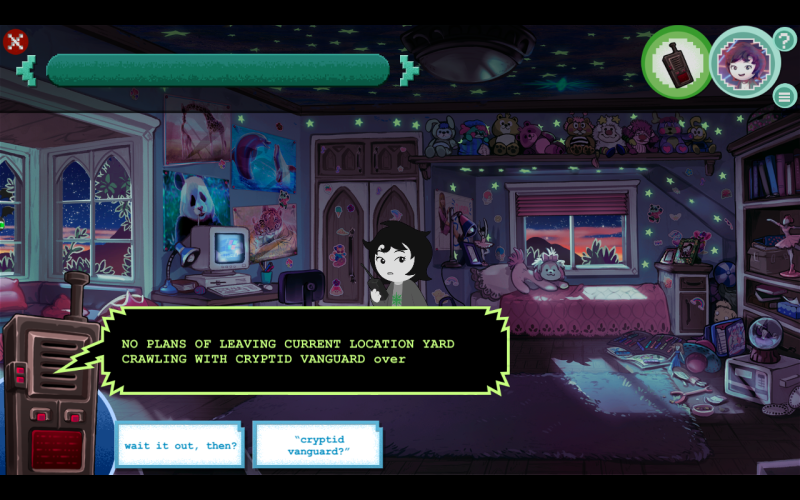 OK, true, you sometimes use your tap-dancing shoes to knock down piles of boxes and advance the story. But the real world practicality of tap-dancing aside, most of the puzzles make sense. When you’re looking for batteries, you can try to scavenge some from an old Sony Walkman and a TV remote. When you need to lure a pigeon down from a high place, you’re charged with looking for something that’s “bread like.” For a game that gets a little wacky sometimes, Hiveswap’s puzzles are fairly down-to-earth and don’t strain believability. It doesn’t have a lot of backtracking either, though the world itself is also fun to explore.

When you’re faced with a wall of family portraits, Joey has something to say about each one of them. There are paintings that have been defaced by stickers, closets full of junk, and a pitiful kitchen that leads to some insight into how these children have been living (i.e. cared for by an alcoholic babysitter with a heart of gold). I almost wish there were more things you can click on — for instance, you can’t click on all the items in Joey’s room, though you can on a fair number of them — because a big plus for me is learning more about the characters. Hiveswap looks great — detailed backgrounds, beautiful colors that pop, and simple yet expressive characters. I loved all the detail crowding Joey and Jude’s house, and I enjoyed Xefros’s cartoonishly bizarre alien homeworld. All the illustrations are hand drawn and brimming with personality.

The soundtrack was also charmingly upbeat. It included some crunchy chiptunes, and bears the mark of Toby Fox, creator of the indie hit Undertale, who contributed to Hiveswap’s soundtrack along with previous compositions for Homestuck. 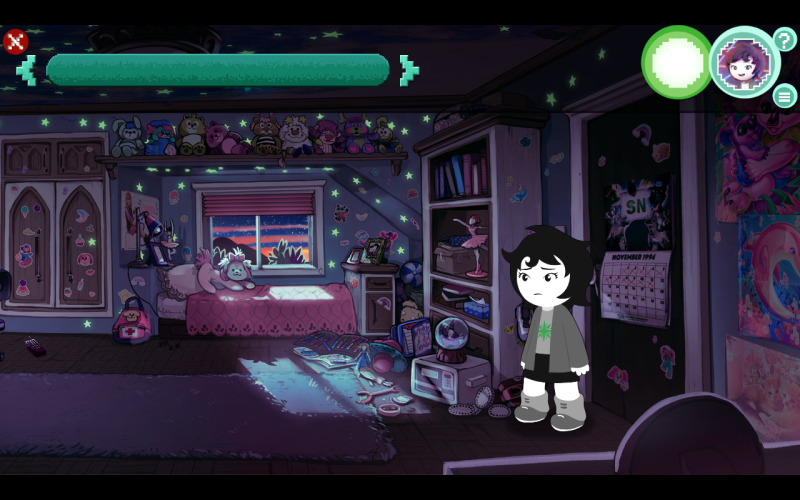 Each of the characters has their charm, but I didn’t feel like I connected with any of them as much as I did with Joey. She’s the one I spent the most time with and the one whose character arc got developed. In the first half of the game, I got a clear idea of how she felt about her various family members, I knew what she wanted to be when she grew up, and I knew her values and priorities. I appreciated her acerbic sense of humor and perspective, and I started caring about her. And then it swapped her out — but only for a moment.

The first character swap was jarring. It seemed like it was out of convenience; Joey needed to solve a puzzle, and suddenly I was playing as her brother, Jude. After fiddling around as Jude — for not even five minutes really —  I got the puzzle piece I needed and swapped right back to Joey again to continue on as before.

Other character swaps felt just as unnecessary. I learned a little more about the alien world when I played as Xefros, but I didn’t really feel like I got a chance to know him the way I did with Joey. Maybe I would have appreciated it more if I knew the characters from Homestuck, but since I came in as a newbie, it was just kind of baffling. You only use the mouse and keyboard, and clicking or pressing any key skips to the next dialogue box. Sometimes I would accidentally skip dialogue because I was trying to interact with the environment. It happened just a few times, but when it did, it was a little annoying.

I also had some wonky moments where I would try to examine something in the environment and Joey would get in the way. It wasn’t always clear what I could interact with or not, and the pathfinding was a little cumbersome at times. I’m not sure if it would have been better if navigation had been relegated to WASD or arrow keys, but there was something a little unintuitive about moving around in the space. 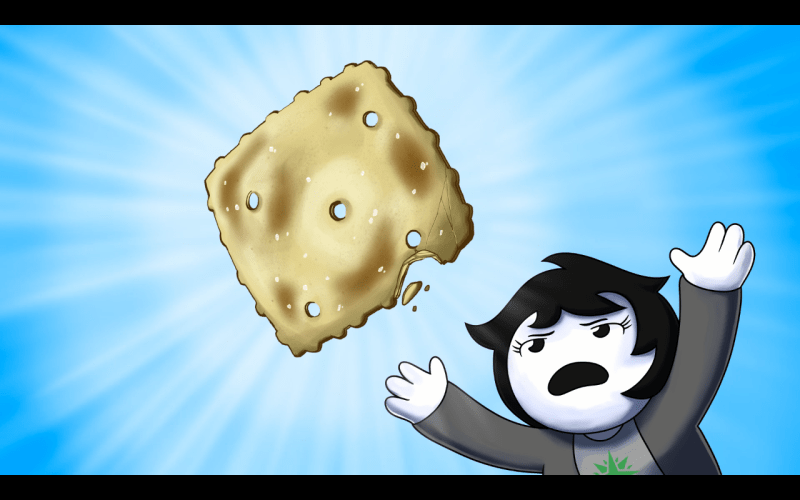 Hiveswap is full of teenaged charm, such as Joey’s obsession with Clarissa Explains It All or her gloriously sparkly Lisa Frank posters. It’s a surreal world where monsters can pop out of nowhere and a mysterious portal in the attic can send you shooting through space to an alien planet without any warning. The combat system is baffling but entertaining — in one battle, I think I actually killed something with paprika — and I’m interested in learning more about Joey and the adventure she’s found herself on.

Hiveswap comes out on PC and Mac on September 14. The publisher sent us a code for this review.