The battle royale genre has nearly taken over video games. Fortnite, Apex Legends, and PlayerUnknown’s Battlegrounds are all major hits. But it’s easy to look at data like Twitch viewership and assume that they all deeply cut into each other’s audiences. That’s not the case, however — at least according to industry intelligence firm Newzoo’s latest report.

For its study, Newzoo focused on players in the U.S, Germany, and China. It found that battle royale shooters are growing the total gaming audience even if they also has some crossover with each other and with games like Overwatch and Battlefield. But the competition between Fortnite, Apex Legends, and PlayerUnknown’s Battlegrounds is far from zero-sum.

Newzoo found that, in the three countries it looked at, 59 percent of players tend to stick close to one of the big three battle royale games. 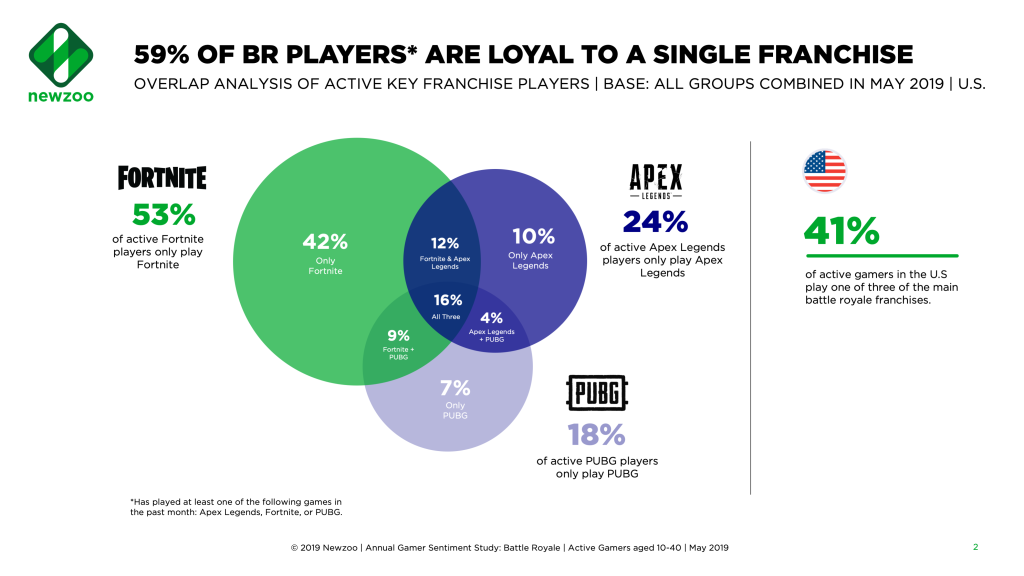 That loyalty makes sense because players understand the major differences between each game. And people come to Fortnite, Apex Legends, and PUBG for different things.

But it’s not just about the way the games play. It’s also about how people can access them.

“Zooming back in on the U.S., players of each franchise have different platform preferences,” said Wernars. “The majority of Fortnite players, for example, play on console. …. Meanwhile, Apex Legends and PUBG skew more towards PC and mobile, respectively.”

Fortnite was the first major free-to-play game on console, but it also has full cross-play support. Millions of people already have a PlayStation 4 and Xbox One, and they don’t need to switch platforms to play with hardcore friends on PC.

Newzoo’s data also suggests the audiences for the big three battle royales were never the same. It saw that Call of Duty players filtered primarily from Call of Duty. Apex Legends and PUBG, however, has their biggest overlaps with Overwatch and Battlefield, respectively. 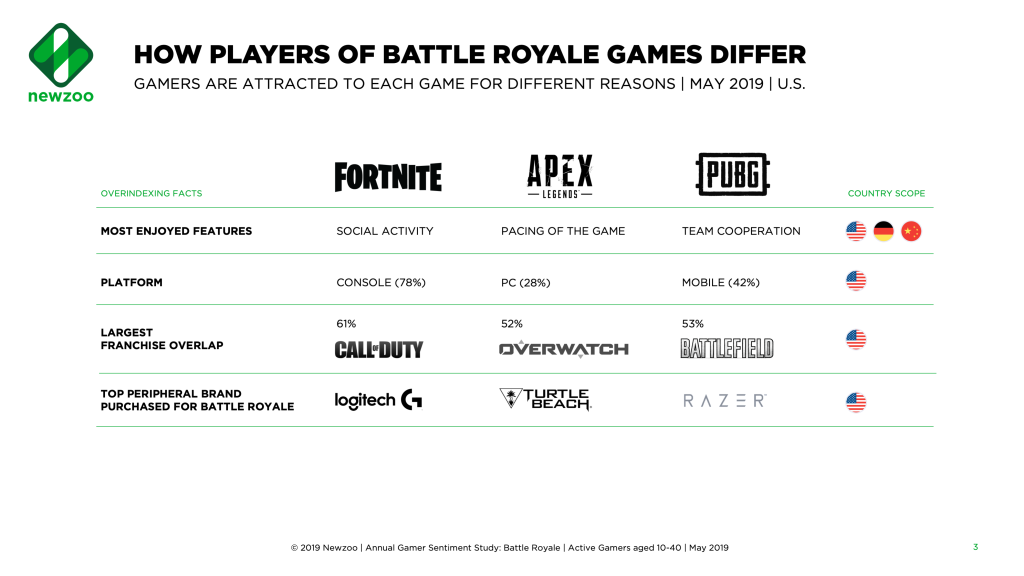 While Fortnite, Apex Legends, and PUBG seem like they are dominant and wouldn’t let a fourth major competitor enter the space, Newzoo doesn’t agree with that.

“Around 15% of U.S. gamers are churned battle royale players who intend to play the genre again in the future,” said Wernars. “This means that there is a deep pool of potential players at the ready for any new publisher looking to release a battle royale game or—of course—current battle royale publishers looking to win back lost players.”