Virtual reality has the power to immerse audiences in horror experiences that deliver new heights of scream-out-loud sensation. Hopes are high in the entertainment industry for VR headset technology, but as a VR creator with a few of horror experiences under my belt, I’ve learned that creating watchable VR in the horror genre is complicated.

Unlike 2D horror films, which thrive on creating over-the-top frights to induce outright terror, an important marker of success in VR is creating an experience the viewer can sit through without abandoning the headset in terror after a few minutes.

Virtual reality could be scarier than 2D horror for viewers, and creators working in the space need to hone their sensitivity to this reality. VR horror can intrigue and spook viewers — or send them running — due to its capability to trick the brain into thinking the body is located in a totally different space. With viewers’ eyes and ears immersed in the horror scene, the person wearing the headset has nowhere to escape. Playing with effects like vertigo, jump scares, and creepy environments can have very different effects from how they’re seen in a movie. That can lead to some severe consequences if not respected. Your could cause vomiting, trigger PTSD, or force someone to throw their expensive headset across the room.

Of course, everybody’s tolerance for horror is different. Frankly, I have a hard time watching the Paranormal Activity series in 2D because the filmmakers do a great job of making me feel stressed out and immersed in the horror. I was able to direct the Paranormal piece in 360 video by tapping into that anxiety. Some people love the thrill of R-level horror with extreme violence and gore, and others enjoy the psychological horror, but I think some people who enjoy 2D horror might not be as comfortable watching the same in VR because of the heightened sensory overload. I think if you watch our Paranormal Activity experience on a computer screen, it’s not nearly as scary as inside a headset, where returning to the real world requires removing the headset entirely. 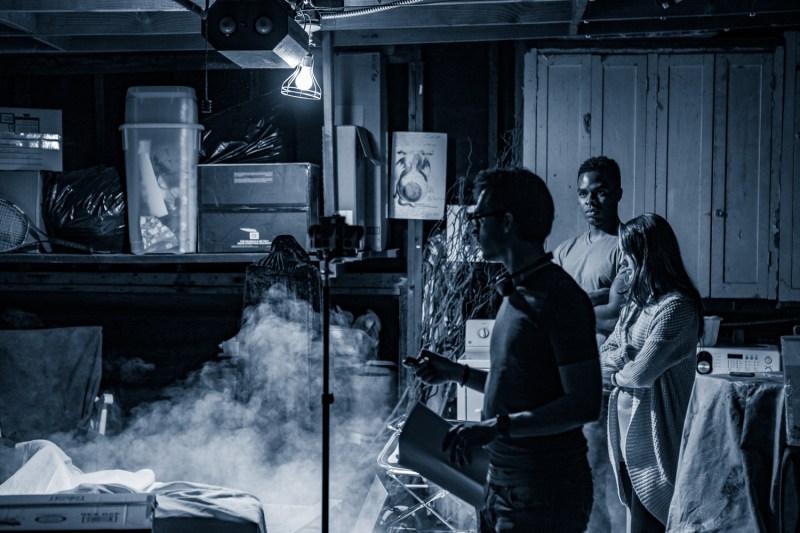 One of the key reasons we think the Paranormal Activity experience was so successful, with over 7.5 million views on YouTube, is that live actors, who seem like ordinary people, share the terrifying experience with you. Many VR pieces I have seen, including Conjuring, The Ring, Ouija, Stranger Things and The Room, are game engine-based and had no scared characters. I prefer pieces that incorporate characters reacting to the frightful situation or scene. Other VR experiences I found effective in terms of being frightening but also engaging and watchable are Sisters: A Virtual Reality Ghost Story, which had viewers spooked at Sundance; and Catatonic by Guy Shelmerdine, which uses live actors who are frightened by what is going on. Catatonic also made the film festival circuit.

The important thing for the makers in this new medium is to make sure that what we create is still entertainment users can enjoy. This relies in large part on creating a story users want to follow in spite of the horror. I think there is a line of going too far in any medium, but the complexities of a medium in which the audience feels like they are actually in the space has to give us pause on the psychological ramifications. I’m not one to blame violence on video games, but I do believe in a sense of responsibility as a storyteller to consider the consequences of creating truly disturbing imagery. I think it’s so important to root all the creative decisions in story and to think hard about how the viewer will experience a scene.

I talk a lot about how effective storytelling requires great characters, compelling conflict, and emotional resonance. That’s where the similarities with 2D films end. Making horror in VR is completely different than in 2D, in the same ways that making any video in VR is different. The storytelling language is underdeveloped without the techniques we adopted in 2D film, like cuts and montage. However, we do have the feeling of presence, which is why the horror genre is an early success in the space.

For example, we always ask ourselves, “what is our point of view in this scene?” and that helps form our creative plan of attack. What works well in VR, similar to 2D horror films, is the use of long takes to build suspense. The best VR horror experiences are ones that create the feeling of actually being present in the space and experiencing the fear along with other characters. Feeling like you are in the same garage being haunted by a demon adds to the fear. Creating a real-time story where the audience doesn’t know when the next jump will be can still be a good technique, so long as we consider how people can make it to the end of the experience without throwing the headset off in a panic.

We all know TV shows and movies are fake, but with VR, the barrier is somehow less obvious because viewers are completely immersed in it. There isn’t a “screen” between the viewer and the experience. Maybe as audiences become more used to VR as a medium, the boundaries we push will change, but for now, the practical realities of immersion oblige makers to carefully weigh choices surrounding the implementation of content and sensory cues in the VR experience that they’re putting their heart and soul into creating. As creators, we have to make sure the viewer is hooked and intrigued, but that the experience is not too frightening that it prevents them from diving in and exploring.

Matthew Celia, Managing Director and Creative Partner of Light Sail VR, fuses his knack for crafting authentic narratives and his technical prowess across all sectors of VR production to create compelling cinematic storytelling.