For those who miss The Lord of the Rings and The Hobbit movies, Warner Bros.’ games based on the J.R.R. Tolkien universe of Middle-earth are the next best thing. In fact, I find that the stories in the Shadow of Mordor and Shadow of War games are truly Tolkienesque in quality.

Shadow of War continues the narrative about Talion, a Ranger of Gondor who has become the Bright Lord, a challenger to the evil Sauron. It takes place in the fiction during the 60 years between the events of The Hobbit and The Lord of the Rings. Michael de Plater, director of the game, said in an interview with us that the title is orders of magnitude bigger than the original in terms of story, the size of the world, and the number of enemies that you encounter through the innovative Nemesis system (a hierarchy of Orcs that you must dominate).

The action-adventure game debuts on August 22 in North America on the PlayStation 4, Xbox One, and Microsoft Windows.

Here’s an edited transcript of our interview with de Plater, who was also director on the first game. 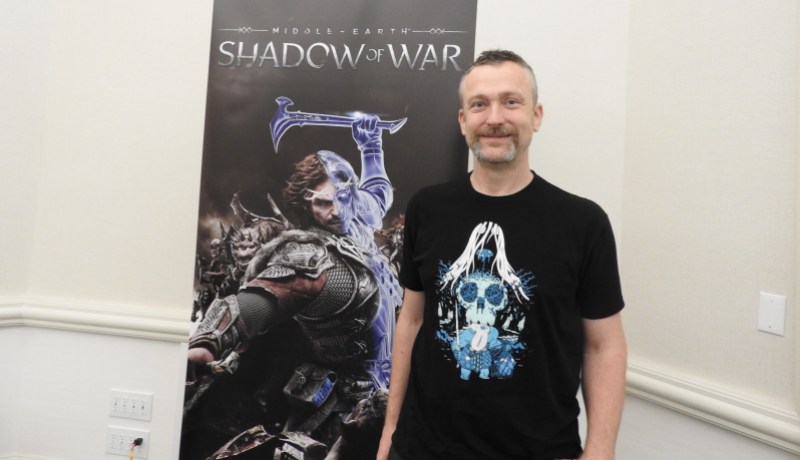 GamesBeat: It almost felt, after I watched a playthrough once, like there were some tricks to taking over the fortresses more easily. You have to learn that throughout the whole game, though.

Michael de Plater: That’s the thing. The fortress assaults would be many hours in after building up your army. Dropping into them right off is a bit overwhelming.

GamesBeat: It seems like hard-won knowledge, but at the same time, it’s balancing an impossible task.

de Plater: It’s trying to balance both of those things. We want to do two things. We want to make a challenging experience for players that want that but also an accessible experience for players that want that as well. It’s hard to get that spectrum, but we do that a number of ways. One of them, even within the fortress assaults themselves, you can either launch straight into the assault and just attack, or you can prepare for it by infiltrating spies and assassinating commanders and leveling up your army. You can get it to a point where it genuinely is easy to just steamroll past the enemies.

We also use the idea of intel — gathering information and learning the strengths and weaknesses of your enemies and looking at that ahead of time. We make it relatively hard if you just charge in. You can win, but it’s going to be challenging. If you learn what specific weaknesses your opponent has, you can use that to your advantage and almost make it the complete opposite.

GamesBeat: Are you going to do a lot of trial and error? Assault once, it doesn’t work, and you go away for a while to build up?

de Plater: It’s hard to show in a shorter time frame like this, but the good thing is, when people lose, we want to use that to generate new stories for them. Maybe you killed a couple of the war chiefs. If you attack again — time is moving forward. We’re not saying you have to go and do the same thing over again that you just failed to do. Any progress you’ve made can be kept over time unless the world evolves. You can make your followers more powerful. You can get spies going in there. Your progress can go forward.

You really have either choice. Maybe you do it again immediately before they have a chance to rebuild, and you can use the knowledge you’ve acquired. Or you can step back and build up your army and weaken the enemy forces and prepare before the next attempt. We always want to present this spectrum of choices, so people can approach things however they want to. 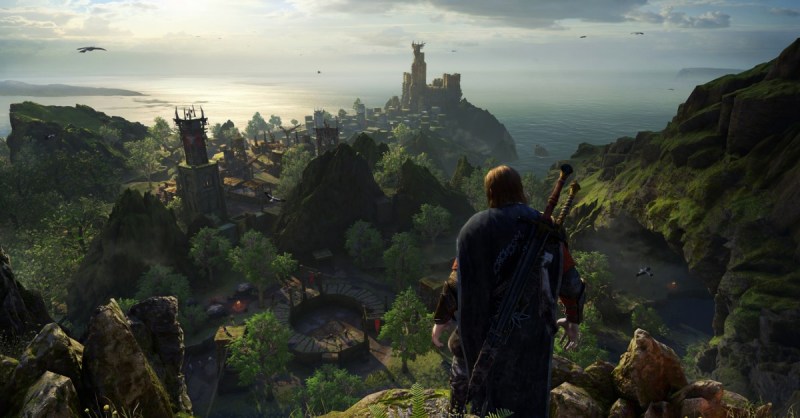 GamesBeat: I remember in Mordor that I didn’t realize I was building up the enemies by losing so often. If you want to take them out, you have to persist.

de Plater: Right. Again, that really comes down to exploiting their weaknesses. We do a lot more now with dynamic difficulty and also with selectable difficulty. We’re not going to get into the situation we sometimes had in Mordor where the game leveled them up to a point where it became almost impossible. We do cap that and balance for that this time.

GamesBeat: What else is different in the fortress battle we just fought, compared to the original game?

de Plater: We can conquer and take control of the fortresses. … The different upgrades and attributes and weapons of the fortress, the number of different enemies we can face. The scale, the fact that we can have hundreds of enemies there at once. Everything about them is new compared to the first game.

GamesBeat: The elf shots — are those going to be fairly scarce in the game? Here, it was almost unlimited.

de Plater: As you go up and get bows that can have larger amounts of ammunition — we’re iterating on that through balancing. Usually, people don’t want to completely run out of ammo. It’s not Resident Evil, not a survival game in that sense, but you have the amount you have, and you need to go get more.

GamesBeat: That was the sneaky way I beat the boss, just by staying up high and shooting him with arrows. If I’d run out, I’d have had to jump down, I suppose.

de Plater: Some of them can also potentially be immune to arrows. Each of the different enemies has strengths and weaknesses that can encourage or disable different strategies.

GamesBeat: So that’s not always going to be a winning strategy?

de Plater: It could be a winning strategy against some enemies, but it won’t work against some others. That’s the key thing for us with creating these different dynamic and procedural bosses. They compel people to use a variety of strategies and tactics against them — to study their weaknesses and exploit that.

GamesBeat: It seemed very chaotic down on the battlefield. Do you have more characters coming in than the last time out?

de Plater: Many, many more characters. It’s not just the fact that there’s more characters, though. There are also more effects on the environment. You see fire spreading, or poison, or curses, or beasts coming in. The potential for that chaos and craziness is larger in multiple ways.

GamesBeat: As far as the lore goes, are you finding that there are enough fortresses out there to have names for them?

de Plater: Mordor’s not very detailed within the lore, so that gives us a space where — within the boundaries of what we know — a lot of these places are just a name on a map somewhere. It’s up to us to give the fortresses their names and flesh them out and so on.

GamesBeat: Do you attach special significance to the ones that do have a place in the lore, like Minas Morgul?

de Plater: Minas Ithil is the sister city of Minas Tirith in Return of the King. We wanted to create that as a very iconic place that resonated with Minas Tirith. Minas Morgul, the city of the Witch King, is very iconic in the films and books. We wanted to create that as well. Cirith Ungol is in the movies. Where we have ones that are shared, we want to make them these big iconic places. But at the same time, in parallel to that, we can expand out and design our own places.

The other thing that’s fun, Barad-Dur is something we actually get to see, Sauron’s tower. That’s in the process of being constructed.